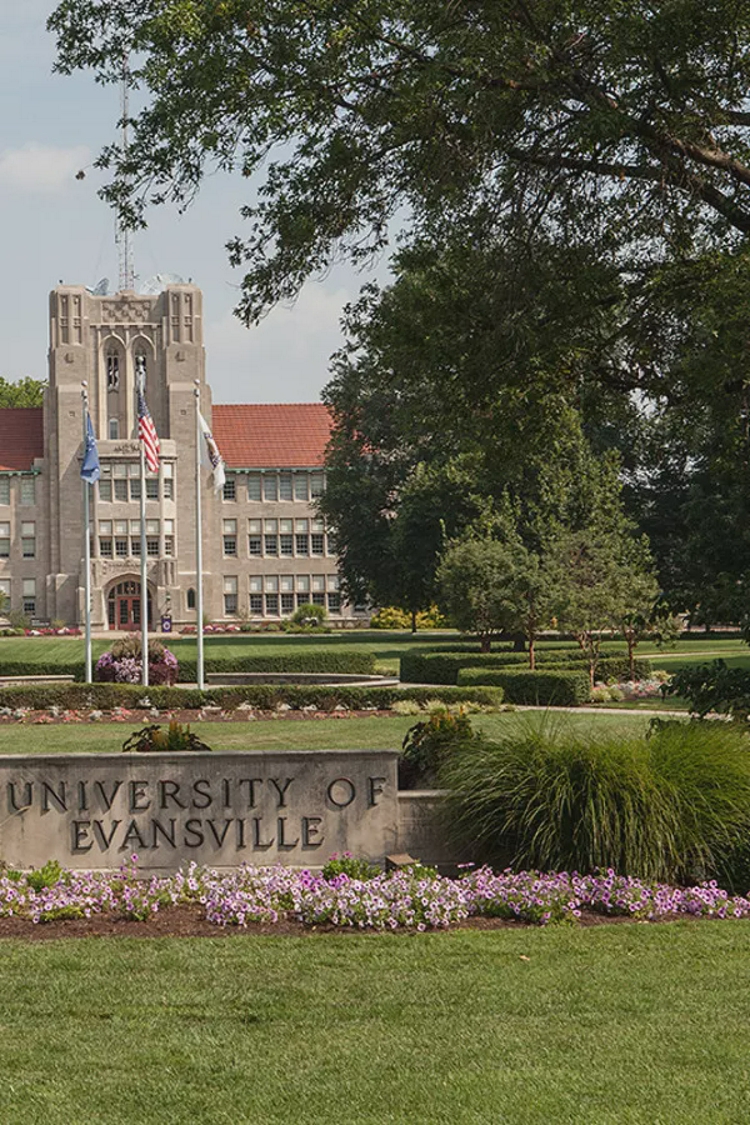 University of Evansville is a private, religious school in an urban setting in Evansville, Indiana. Aces was founded in 1854 and enrolls 2,041 undergrads and no graduate students. Aces provides on-campus housing for up to 1,599 students. The majority of students live on campus, and first year-students are required to live in campus housing. On the weekends, about 85% of students stay on-campus and participate in campus events and social life.

There are many ways for students to get involved at Aces!

Interested in music or performing? Sing in a chorus or perform with one of Aces's theater groups.

Interested in journalism or communications? Aces students can write for the campus newspaper, host a radio show or be a producer for the student-run television channel.

Interested in joining a fraternity or sorority? Aces has fraternities and sororities.

Planning to play sports? Aces has many options for athletes. See them all and learn more about life at Aces on the Student Life page.

Is Aces a Good School?

There is no one way to define a "good" college or university. Admissions criteria, acceptance rate and average GPA are good indicators of how competitive an institution is.

Let's take a closer look at these areas to get a clearer view of what Aces offers and if it seems like a good choice for you.

Retention and Graduation Rates at Aces

Retention refers to the number of students that stay enrolled at a school over time. This is a way to get a sense of how satisfied students are with their school experience, and if they have the support necessary to succeed in college.

Around 84% of students who start at Aces return the next year. Around 73% of students who started at Aces earn their Bachelor's degrees within six years. The average six-year graduation rate for U.S. colleges and universities is 61% for public schools, and 67% for private, non-profit schools.

Job placement stats are a good resource for understanding the value of a degree from Aces by providing a look on how job placement has gone for other grads. Within six months of graduating, 65% of graduates receive at least one full-time job offer.

As of 2022, the total market value of University of Evansville's endowment was $127.8 million. The average college endowment was $905 million in 2021. The school spends $11,476 for each full-time student enrolled.

Tuition and Financial Aid at Aces

Aces meets 84.94% of the demonstrated financial need for undergraduates. The average financial aid package for a full-time, first-year student is around $36,912 a year.

The average student debt for graduates in the class of 2022 was around $33,036 per student, not including those with no debt. For context, compare this number with the average national debt, which is around $36,000 per borrower.

Some aid is awarded on a first-come, first-served basis, so fill out the FAFSA early. Visit the FAFSA website to apply for student aid. Remember, the first F in FAFSA stands for FREE! No one should ever pay to fill out the FREE Application for Federal Student Aid, (FAFSA), so be very wary of anyone asking you for money.

Learn more about Tuition and Financial Aid at Aces.

Based on this information, does Aces seem like a good fit? Remember, a school that is perfect for one person may be a terrible fit for another! So ask yourself: Is Aces a good school for you?

Choose one of the options below to learn more about Aces:

Then use the college admissions predictor to take a data science look at your chances of getting into some of the top schools in the U.S.

Where is University of Evansville Located?

Aces is located in the city of Evansville, Indiana, less than an hour from Evansville metropolitan.

If you would like to see Aces for yourself, plan a visit. The best way to reach campus is to take Interstate 64 to Evansville, or book a flight to the nearest airport, Evansville Regional.

You can also take a virtual campus tour to get a sense of what Aces and Evansville are like without leaving home.

Need Advice or Have a Question About Aces?