How to Stand Out In a Test-Optional World

The COVID-19 pandemic has accelerated the test optional trend in higher education, increased the number of applications colleges receive, and lengthened waitlists. Many students are left wondering how their applications will ever stand out in an increasingly crowded pool. As students enter the brave new world of test-optional admissions, independent research projects are a great way for applicants to demonstrate their strengths and intellectual curiosity.

For students applying to highly-selective schools where every applicant has a sky-high GPA, demonstrating unique interests and skills is key. Former Cornell admissions officer Nelson Ureña noted even academically stellar students can fail to stand out if “their applications lacked tangible indicators of their passions: a project, experiment, portfolio, or an endeavor on which they spent substantial time learning, tinkering, or creating.”

Including additional materials or research projects in college applications is not a new phenomenon. Portfolios have long been a part of the application process for students interested in creative fields. In the fall of 2013, the Massachusetts Institute of Technology added a novel supplement to its undergraduate application process called “Research and Maker Portfolios." The supplement allowed students who had created an individual project—a computer program, a sculpture, a rocket—to describe their efforts in detail.

By most measures, the program was a huge success. In the first two years the supplement was made available, more than two thousand students shared “maker” projects on topics ranging from surfboards to solar cells, and more than three thousand submitted formal research portfolios. Many other schools followed suit. Yale, Columbia, and the University of Chicago are among the prestigious universities that explicitly mention “Research Projects” in their supplementary application materials.

What Qualifies as “Research”?

While the word “research” may conjure up images of lab rats and glass beakers, it actually covers a broad range of creative intellectual endeavors across all academic disciplines. You can even research memes. While specific definitions vary, “research” tends to break down into five categories:

While research can take many different forms, it is ultimately an opportunity for students to conduct independent work on a topic that interests and excites them.

Why Does Research Matter for Admissions?

From an admissions perspective, research can be a better indicator of a student’s drive, intellectual abilities, and academic prowess than grades or standardized tests. Since research projects are highly tailored to a student’s interests, a portfolio of work can help the admission’s committee get a better understanding of students’ academic interests and strengths–which is especially valuable at ultra-competitive institutions.

Due to the Students for Fair Admissions v. Harvard lawsuit, Harvard University was required to publicly release information on its admissions process. A major finding was that Harvard rates all applicants on four areas of excellence:

Based on Polygence’s analysis, the best chance an average Harvard applicant has of gaining admission is to earn a top score in the academic excellence category. Since Harvard is so competitive, good grades and test scores are not sufficient to receive the top academic ranking. Instead, Harvard notes, students who receive the top academic admissions rankings have “submitted academic work of some kind that is reviewed by a faculty member.”

Students who receive the second highest academic rating, on the other hand, are those that have “perfect, or near-perfect, grades and testing, but no evidence of substantial scholarship or academic creativity.” During the 2014-2019 admissions period, 68 percent of students with the highest academic rating were admitted to Harvard, compared with only 8.6 percent of students with the second highest rating.

High School Students Can and Should Pursue Research

As this article shows, research can help students demonstrate the scholarship and creativity necessary to secure a high academic rating from admissions’ committees. At the most competitive institutions, it could be the difference between a two in three chance of admission and a mere roll of the dice.

Students can engage with research regardless of what their academic interests are. Whether a student is interested in literature, history, engineering, or physics, they can and should pursue the topics and ideas that make their minds and spirits come to life. In addition to advantages in the admissions process, research can help students build critical thinking, teamwork, and communications skills that will serve them well in all aspects of their life. 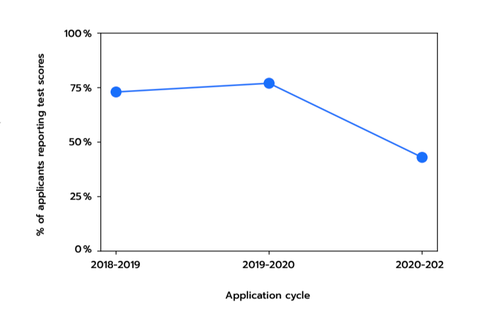 Want to take a peek behind the curtain of Harvard's admissions process?

Download Polygence's free white paper that analyzes Harvard admissions data from 2014-2019 and on which this article is based.

Polygence helps high schoolers turn their passions into research projects and rediscover the joy of learning through personalized guidance from academic mentors. Polygence is on an uncompromising mission to reshape education around the globe by making it project-focused. At Polygence, the ultimate surge of adrenaline comes from hearing our thousands of students and mentors rave about their experience and describe its life-changing impact.

More on Preparing for College

Should I Take The ACT If I’m Applying to Test-Optional Schools?

Taking a standardized test is no easy task, in fact, sitting in a classroom for multiple hours can be quite daunting. However, th…

Congratulations on completing your ACT!

If you're thinking about taking the ACT, the first step is to create a MyACT account. A MyACT account will not only help you…

What Is A Good High School GPA For Top Colleges?

A Guide to Summer Programs for High School Students

Are you looking for an academic-focused activity to participate in over the summer? If so, you might be considering a college-hos…