The States of Student Loan Debt

I tried to make a pun with my title today. One way to look at it might be that there are multiple states of student loan debt. For example, one state might be near-lifelong payments. Another might be the state of a bad credit rating because you've missed some payments or maybe defaulted entirely. Those of you with a lot of loan debt have no doubt experienced additional states, but we'll discuss those another day.

In this edition of Admit This!, though, the “states" that we'll be discussing are those of the United States. We're going to take a look at those states with the highest median loan debt for college graduates. I have preached seemingly endlessly (as my readers can attest) about the perils of high loan debt. However, even if you've had your fill of my soap box, you might at least want to take a quick look at this study and its associated rankings, just for curiosity's sake, to see where your state comes in.

We're approaching the end of May. This upcoming weekend celebrates Memorial Day and the Indy 500. By this time, most high school seniors who have been accepted to and enrolled at a college have received their financial aid packages. Some may be currently negotiating for a better deal that shifts more of their package from loans to grants. This is certainly a worthwhile effort and time well spent.

Other enrolled first-years may be still basking in the afterglow of their acceptance. I've seen this a number of times in the seniors with whom I've worked. This relates to what I call the “dream school syndrome" (DSS). This can have perilous effects on judgment.

What happens with dream-schoolers who have happily been accepted at their dream school is that their elation about achieving their “dream" obscures their objectivity about paying for that college. Dream school parents can also be affected by the DSS. This happens when the parents are in agreement with their child's dream. In fact, the dream school may even have been the parents' originally, and the desire was infused into their child. DSS can be contagious.

The consequence of DSS is that the student and possibly his or her parents assume the mindset of “Whatever it takes!" when they see the financial aid package, which may be completely lopsided with various kinds of loans. In their rush to enroll, these families accept a high level of debt without exploring the options of other schools or serious aid negotiations.

One of the hidden perils of being blinded by DSS is the subtle issue of colleges “front loading" their financial aid. This strategy can be likened to those “free 30-day trials" that services like Amazon Prime, Netflix, Spotify, etc. offer, where you get used to how great these services are and then, after 30 days, you decide to keep your membership. Sooner or later, membership fees go up, sometimes sharply, but you're already hooked. “I can't live without that free two-day delivery and low pricing!"

Front loading financial aid works similarly. The aid package you receive for your freshman year may look decent, with a “reasonable" (a very subjective term) amount of loans and some cool grants (no need to pay them back). There may also be a job (work study) for pizza money and sundries. So, things look good, if not great.

Then, for sophomore, junior and senior years, things go steadily downhill. Grants shrink and loans swell. Debt deepens. You're in too far to transfer because you could lose a portion of those hard-earned credits from either your major or distribution credits (or both). Also, just like Amazon's two-day delivery and low prices, you've grown to love your dream school, with its great food, classy fitness center, cool classmates, world-class profs, etc. Accordingly, you (and maybe your parents, too) decide once again to utter the fateful: “Whatever it takes." DSS strikes again!

This happens across the land much more than you would suspect. Accordingly, let's get back to those (literal) states of student loan debt. You may be surprised at what you see from this survey. If you're a rising high school junior reading this, or the parent of a rising junior (or even a sophomore), the trends you see here might sound an alert that you can keep in mind when those college acceptances and their accompanying aid packages start to arrive.

Once again, Zippia.com comes through with some incisive data related to higher education in the recent article These Are The States With The Highest Median Debt for Graduates, by McLeod Brown.

I love Brown's lead-in to his introduction:

Speaking as someone who will be staring into this dark abyss consuming my bank account for the foreseeable future, student loans are not very fun to deal with.

That's $620 billion more than the total US credit card debt (different rant for a different day).

There are 44.2 million Americans with student debt and the average student loan debt for the Class of 2017 was $39,400. These wild numbers made us wonder – where's all this debt coming from, anyway?

To help answer that question, we scoured through the latest College Scorecard Data from the Department of Education to put together a list of the states in the country that leave their graduates with the highest median debt.

Indeed, student loans suck … big time. I had them and it took me well over a decade to pay them off and, by today's standards, they were pocket change. Here's a listing that ranks states' median loan debt: 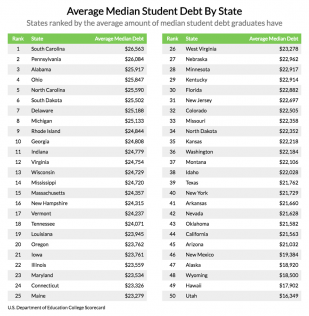 And, here are three excerpts from the study that are of particular interest. Don't rely on my excerpts, though. I encourage you to read Brown's entire illuminating -- and witty -- presentation.

- How's that song go? “Carolina girls… most debt in the world!" North Carolina LOVES debt — the state has eight of the top 50 schools with the most debt.

- South Carolina leaves its grads with the highest average median debt in the country, with six schools in the top 50 overall.

- Georgia and Alabama each have five.

- Big thank you to Utah for leaving their grads with the lowest average median debt in the country.

- 19 of the top 30 schools for median debt are historically black colleges and universities.

That final line item is particularly ominous. Over half of the top 30 schools for highest median debt are HBCUs. If you fall into this demographic, pay attention to what McLeod says about that:

Graduates from HBCUs suffer a heavier student loan burden than their non-HBCU counterparts.

A report from the United Negro College Funds found that 80 percent of HBCU students used federal loans to finance college in 2013, compared to 55% of non-HBCU students.

Additionally, the percentage of HBCU grads who borrow $40,000 or more for college is four times the amount of non-HBCU students.

Shedding light on these numbers, many HBCU students come from low-income backgrounds when compared to those non-HBCU students. Either being the first of their families to attend college, not having the money to afford schooling or both, HBCU students are far more likely to use federal loans to pay their way through school.

To help stop this phenomenon, the report recommends making federal student loans easier to use and understand for low-income families. An increase of grants made available to HBCU students is also used as an example of how to help the situation.

Finally, this last excerpt pays tribute (of sorts) to my home state:

The Keystone State's student debt problem is so bad, millennials are leaving and returning to their home states after graduation to save money.

Erie, Lackawanna, Mercer and Allegheny counties all have significantly higher percentages of their populations living with student debt than the national average.

Yikes. Things don't look encouraging for good old Pennsylvania. I've mentioned here before about a number of families and students whom I've met from just my immediate Pa. area who have told me of their or their child's stunningly high amount of loan debt. That's certainly not a feather in the cap of Pa. colleges, especially those of the state university system.

This will provide good proactive information for you. Along with my ongoing rantings about the perils of misinterpreting or ignoring loan-lopsided aid packages, this article's heads up about national loan-debt trends should be able to give you cause for careful thought.