Report Lists The Most Diverse Public US Colleges, Universities

I recall something my son wrote in his college applications, responding to one of those ever-present questions: Why do you want to attend this school? His answer went something like this: "I come from a conservative, blue-collar community with very little variance in its demographics. I want to immerse myself in a population that has a wide variety of ethnicities and lifestyles. In studying your student body stats, I see that the diversity level is exactly what I'm seeking …"

He was obviously looking for a diverse student body and he found one. That's where he enrolled. His preference for diverse populations has remained with him as he and his family have lived in multiple diverse cities around the United States. Perhaps you're looking for a diverse school where you can spend your undergraduate years. If so, a new report might be able to help you develop some likely candidates to explore for your applications this year.

HeyTutor has just released a new report comparing the most diverse public universities in the United States. Just as America has become more diverse, so has its system of higher education. Since the late 1970s, the percentage of minority students at four-year, degree-granting colleges and universities has nearly tripled. As the report notes:

"While the trend is clear at a national level, diversity varies widely by location. In fact, location is a much stronger predictor of diversity than whether a university is public or private. America's most diverse colleges, as measured by the Simpson Diversity Index, are predominantly found in California, New York and Texas. In general, Western states have a more diverse student body, while Midwestern states tend to be less diverse.

Here Are the Results

HeyTutor revealed the following findings in its report:

Despite a narrow margin of growth, whites continue to represent the majority of Americans. However, that picture is likely to change. By 2045, the U.S. Census Bureau predicts that America will become "minority white," with whites comprising less than 50 percent of the total population. Among young people (under age 18), the shift will take place as soon as 2020…

… To find America's most diverse public colleges, researchers at HeyTutor analyzed data from the National Center for Education Statistics (NCES) Integrated Postsecondary Education Data System (IPEDS). HeyTutor looked at fall 2017 undergraduate enrollment at more than 550 four-year, public, degree-granting institutions. They examined race/ethnicity data and calculated a diversity index for each school. For the diversity index, students that are not U.S. citizens or nationals (nonresidents) are considered a separate group. Additionally, HeyTutor grouped schools into the following cohorts based on size:

Across all public four-year universities, the diversity index ranges from a high of 79.24 to a low of 7.02. Schools that skew toward the upper end of the diversity index have a more equal distribution of students across different racial/ethnic groups. On the other hand, schools with a low diversity index tend to have a single group that accounts for most of the student body. This is most common among schools in the South that are predominantly African American or Hispanic.

The diversity index of total undergraduate enrollment across all four-year public universities is 63.36, based on the following racial/ethnic breakdown: white (54.4 percent), Hispanic (16.2 percent), black (10.5 percent), Asian (7.3 percent), nonresident (4.5 percent), and other races (6.5 percent).

These Are the Most Diverse Midsize And Small Public US Schools: 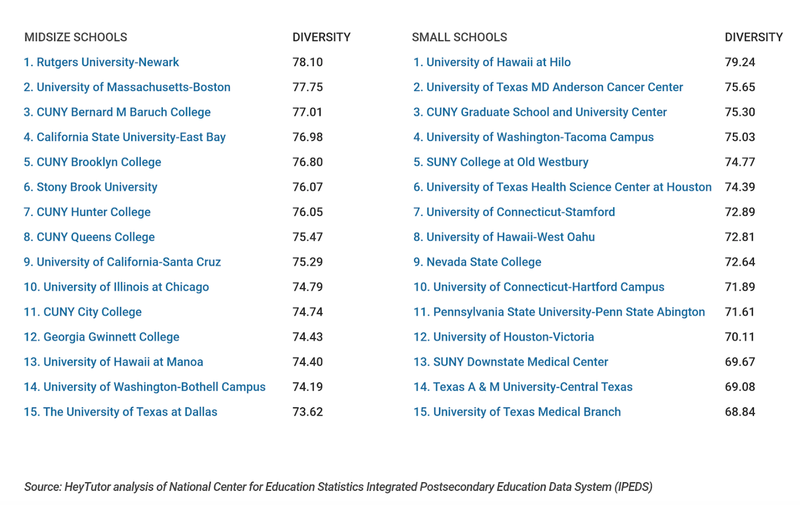 Following Are the Top Three Most Diverse Large US Universities:

Located just outside of Sacramento, the University of California-Davis is the most diverse large public university in the country. At UC Davis, Asian students represent the largest undergraduate cohort, and there is strong representation among most minority groups. Despite a below average African-American presence, the school has one of the highest percentages of foreign students of any public university in the country. The school has a strategic vision for diversity and inclusion. Each year, it awards grants to individuals and groups on campus who come up with innovative proposals to help the university fulfill that vision.

University of California-Los Angeles has a nonresident student population that is more than twice the national proportion of 4.5 percent. The school also has above average Hispanic and Asian enrollment. UCLA describes itself as "one of the world's most ethnically and culturally diverse communities." Students come from all 50 US states and more than 100 foreign countries. The mission of UCLA's Office of Equity, Diversity and Inclusion is to "build an equal learning, working, and living environment, by holding ourselves accountable to our professed ideals."

The University of Nevada-Las Vegas is home to a student population that includes 29 percent Hispanic students and 15.5 percent Asian students. These numbers place UNLV well above the national average for each demographic. The school hosts more than 50 cultural, ethnic and religious-based organizations. UNLV also boasts "The Intersection," a multicultural academic center for students, faculty and staff that was created to help students, particularly first-generation and students of color, succeed in their academic careers.

For the remaining diversity rankings -- 577 in all -- be sure to check the complete report.

If you're looking to become part of a student body that is rich in cultural diversity, this HeyTutor report should be a significant help for you to identify some likely candidates to consider. As long as they meet a majority of your other preferences for your undergraduate years, you should be able to save a lot of valuable research time when creating your college list.

How to Get More Out of Your College Tours

Last week, we were privileged to hear from a UChicago admissions director in an Ask Me Anything forum event to get exclusive tips…

When, Exactly, Is the Official Application Deadline?

HELP!! I'm applying to Syracuse University Early Decision. The due date for the app is November 15. I'm not sure, does …

Applying to Grinnell? Here's Your Guide for Getting In