Articles / Admissions / What to Know about Military Academy Admissions

What to Know about Military Academy Admissions 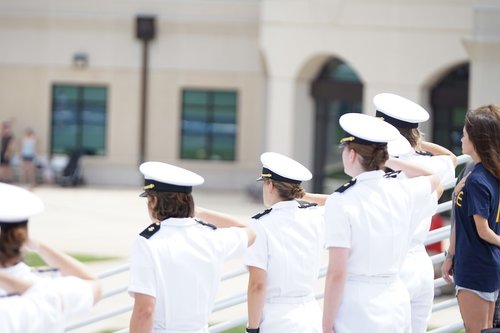 If you're confident that a career in the military is in your future, then applying to one of the five US military academies may be an option to consider. But first, you should get to know the aspects of applying to a military academy that are different from the average college admission process.

"First, students are pre-screened with a questionnaire to ensure they meet basic academic, leadership and moral requirements; if a student passes the first stage, they become a candidate (applicant)," explains Lisa Hillhouse, who spent 20 years mentoring and recruiting officer candidates for the United States Air Force Academy and Air Force ROTC before starting Hillhouse College and Career Advising.

Some other important differences include the following:

These Are the Five Academies

When you start reviewing your options, you'll note that the five military academies in the US are as follows:

If you're checking these schools out, remember that there's an expectation that you're certain you want a military career.

"The academies really require and expect demonstrated interest on the part of the candidate — they really want to see that you've researched this and you know what a military career is and you know why this is a good fit for you, and you know what you want to do in the military," says Hillhouse. "Because of the academic, mental and physical challenges, students need to want to attend and succeed with their whole heart. Sometimes appointed students think they will 'try it out' over the summer. If you are half in, you won't last."

Also, it's important to remember that being a student at a military academy is a very different experience than that of a typical college student.

"Students give up the typical freedoms college students have," notes Hillhouse. "There are conduct and fitness standards to maintain as well. Cadets/midshipmen begin their training within weeks of high school graduation and train throughout the year including most of the summers."

One big misconception among students and parents is that attending a military academy is free, as in a "free ride," but Hillhouse explains that in reality, that is not completely accurate.

"While most of your expenses are covered, there are some out-of-pocket costs such as grooming, uniform maintenance and miscellaneous fees such as a computer," Hillhouse says.

Obviously, making the decision to apply to a military academy should not be based exclusively on cost. It is a serious decision, and what life will be like as a student at a military academy -- as well as the future of a military career -- should the guiding force of whether to apply.

A military career isn't for everyone, but if you know that is your path, do your research to find the right fit, and work diligently to meet not just the standard college admission requirements for any higher education institution, but also strive to excel all of the other additional criteria to increase your chance of admission to a military service academy.

Elena Loveland has been a writer and editor covering higher education and college admissions for 18 years and is the author of Creative Colleges: Finding the Best Programs for Aspiring Artists, Designers, Dancers, Musicians, Writers, and More. Creative Colleges has earned recognition in the College Bound Teen, the Washington Post, the San Francisco Gate and U.S. News and World Report's Annual College Guide. Loveland has spoken at the Independent Educational Consultants Association and the University of the Arts, as well as several high schools about college admission for creative students. She has worked for the National Association for College Admission Counseling as editor of the Journal of College Admission and for NAFSA: Association of International Educators as editor-in-chief of International Educator magazine. As an independent journalist, Loveland.s work has appeared in numerous publications such as American Careers, Dance Teacher, Hispanic Outlook on Higher Education, International Educator, Pointe, Teen Vogue, University Business and the U.S. News & World Report's Annual College Guide, among several others. She has a master's degree in English and has been an adjunct instructor at three higher education institutions. Loveland provides private college admissions consulting to families upon request. She lives in the Washington, D.C., metropolitan area.