Just for fun, let's talk about college mascots. You've seen them cavorting at most every college sports broadcast on TV. They get passed through the stands on the hands of rowdy fans. They wrestle and tease the opposing team's mascot. They sometimes even toss goodies into the stands for the pleading crowd. In other words, college mascots have a very active and--seemingly--fun life.

I know of one local guy who was his high school's mascot and his ambition was to go on to college and become the mascot there. He realized his dream and was so good that he became something of a legend among mascot fans. The point of writing about mascots here today is that what meets the eye (about mascots) is not necessarily equal to the reality. Who knows what perils and pleasures dwell within the murky mascot world? Well, Campus Grotto does.

In their just-released article entitled 10 Little Known Facts about your College Mascot, we find some cool insights, some of which go well beyond #1's obviousness of "The costume smells pretty bad." Let's take a closer look (rather than smell) inside the secret world of college mascots. 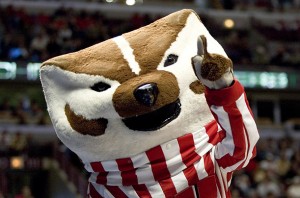 By way of introduction, Campus Grotto notes, "They entertain crowds with their school spirit and antics. They pump up fans loud enough to help sway momentum in their team's favor. They pose for thousands of fan photos. But what else goes on in the secret world of a mascot? Here we take an inside look at some things you might not know and see just what it's like to be a college mascot."

So, let's take a look at five of the 10 insightful revelations.

It's gross: anytime you're in a mascot costume, you can expect to be sweaty, stinky and just feel nasty. The suit is made out of heavy material so the temperature inside gets a good 20-30 degrees warmer than the surrounding environment ... This seems pretty obvious. You can imagine the heat a mascot guy or gal can generate doing all that jumping and running, especially on early fall football days in warmer climates. I would hope that mascot personnel have access to lots of fluids, so that they don't collapse from dehydration. Nothing smells worse than a passed-out, sweaty Wolverine.

2. Mascots get a full-ride scholarship

Some will and some won't, but most Division 1 mascots get a full-ride scholarship. It largely depends on how prominent the athletic program is. Even the smaller schools will cover a large percentage of tuition ... Now here's a form of financial aid that you may not have considered. This may be of special interest for those of you underclass high school students who are particularly athletically gifted. Gymnasts are prime candidates for mascot duty. So, if you want to begin a long-term campaign toward realizing your mascot mania, start planning early. I'd say 9th grade would be an ideal time to begin your plan,

5. Most Mascot Fights are Pre-Planned

Most mascot fights you see are orchestrated. Before a game, mascots will get together and plan out mini-skits with the intention of entertaining the crowd ... Shades of professional wrestling. I can hear the conversation between the Nittany Lion and the Wisconsin Badger: (Nittany Lion) "Okay, I'll pretend not to see you sneaking up on me while I'm doing the Harlem Shuffle in front of the Blue Band." (Badger) "Good. I'll ham it up by looking extra stealthy and then take you down with a cross-body block, headlock, and then top it off with an Atomic Elbow leading to a Pile-driver." (Nittany Lion) "Sounds great!"

6. The worst time to perform is when hungover

The worst time to wear the suit and have to perform is when you are experiencing a hangover from the night before. While mascots aren't allowed to go to parties with the suit on, they still roll with a crowd that likes to have a good time ... This insight seems to come from the Department of the Obvious. Combining a hangover with extreme physical exertion and high heat makes for some fun possibilities. Just try to imagine hurling those Budweisers and hot wings inside that huge bulbous head of Brutus, the Ohio State Buckeye mascot. That imagination could put you completely off your lunch.

8. They strictly maintain a secret identity

The college and mascot squad go to great lengths to keep the mascot's identity secret. Sometimes only the closest of friends know (sometimes not even them) ... In my opinion, this has myriad advantages. First, it would appear to save mascot personnel from falling prey to rival schools' students who want to do damage to a mascot's image or even personal well-being, to say nothing of protecting the actual (highly expensive) mascot costume, itself. Also, and perhaps more importantly, the nameless mascot can avoid embarrassing persecution, should s/he fall victim to an unfortunate post-hangover inter-costume accident, as mentioned in #6, above.

So, there are five of the 10 mascot revelations. Check Campus Grotto for the remaining quintet. Also, if you're a young, agile, spirit-minded sports fan looking for an exciting way to help pay for college, this may be an entertainment path to consider. Check you local cable listings for football and other collegiate sports broadcasts. Watch and learn. Oh, and don't forget to take in some professional wrestling while you're at it.