We were talking before about revolution in higher learning. I'd like to be able to come back in 50 years to see what the collegiate landscape in America looks like then. There's a whole lotta shakin' goin' on these days and some colleges and universities are having a hard time holding on. That's as it should be, in my view, because in our capitalistic society market forces determine who wins, who loses, and who has staying power.

As for higher education's mantra, we need to look no further than the inscription at the base of Emil Faber's statue on the campus of Faber College: "Knowledge is good." That just about says it all. Great! Who can argue about the goodness of knowledge? But, how that knowledge is delivered is at the core of the impending revolution. Accordingly, have you heard about Kahn Academy?

Kahn Academy's mantra is "Learn almost anything for free." Gotta love that word free. When you click on Kahn's "About" button, this is what you'll find:

A free world-class education for anyone anywhere.

Khan Academy is an organization on a mission. We're a not-for-profit with the goal of changing education for the better by providing a free world-class education for anyone anywhere. 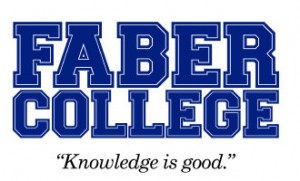 Terrific. What makes this site even more friendly is the fact that it's a dot-org. No crass dot-com intentions. In fact, there's even a "Donate" button that takes you to a page that allows you to help the Kahn cause. No fee schedules. Plus, there's more. Much more.

The handy Wikipedia overview description of Kahn Academy says, "The Khan Academy is a non-profit educational website created in 2006 by American educator Salman Khan, a graduate of MIT and Harvard Business School. The stated mission is 'providing a high quality education for anyone, anywhere.'

Two hundred forty million free lessons! Plus, who knows how many more free lessons have been delivered since this statement was written? I know a mother who advised her high school son to take advantage of Kahn to brush up on some calculus fundamentals. The Kahn videos come across as more user friendly than the silent textbook page for most students.

The ever-growing inventory of topics covered includes math, science and economics, computer science, humanities, and the always popular test prep. These areas appear on a drop-down menu labeled "Learn." Inside each topic is a generous list of specialized sub-topics that can meet most any need. Kahn describes the mission of its more than 4,000 teaching videos like this: "Our library of videos covers K-12 math, science topics such as biology, chemistry, and physics, and even reaches into the humanities with playlists on finance and history. Each video is a digestible chunk, approximately 10 minutes long, and especially purposed for viewing on the computer." Quite a resource.

What's not to like? Well, apparently some people think that there are some things not to like about Kahn Academy. Robert Talbert, writing in a July 2012 posting in The Chronicle of Higher Education's Blog Network, discusses his opinions about The trouble with Khan Academy. Among other issues, Talbert notes, "Khan Academy is not a substitute for an actual course of study in mathematics. It is not a substitute for a live teacher. And it is not a coherent curriculum of study that engages students at all the cognitive levels at which they need to be engaged. [But] It’s OK that it’s not these things."

Also, Talbert writes, "Khan Academy is great for learning about lots of different subjects. But it’s not really adequate for learning those subjects on a level that really makes a difference in the world. Learning at these levels requires more than watching videos (or lectures) and doing exercises ... [however] This is not to say that Khan Academy can’t play a useful role in learning calculus or some other subject."

He wraps up his critique with this: "One last thing for this post. I’m not a Khan Academy hater. I’ve used the videos for a long time — I think as far back as 2008, and definitely before KA made it big. I’ve assigned KA videos many times and will continue to do so, in the right amounts and the right contexts ... I’m not jealous of, or threatened by, Khan Academy in the slightest. But I’m not an uncritical fan, either, and we need to look at carefully at Khan Academy before we adopt it, whole-cloth, as the future of education."

Fair enough. At least Talbert is cautionary about placing the crown of higher educational revolution on Kahn's head.

From my view, if I might add a personal comment, I would like to see an extended representation of the arts, music in particular. I see that art history is being served under the "Humanities" banner, but it would be nice to have a complementary topic of music history, since music plays such a central role in world cultures. Perhaps music history is in the works. That's just my personal preference. I don't think that Kahn's mission is intended to be all things to all people. That would be revolutionary!

One resource that does deliver, in great detail, about music history (and myriad other diverse subjects) is The Great Courses. However, this is not a free resource. The Wiki on TGC goes like this: "The Great Courses is the brand applied by The Teaching Company, a Chantilly, Virginia company, to its recordings of lectures by university professors and high-school teachers. It sells the courses in CD, MP3, DVD, and MPEG-4 download and streaming formats. ... The company was founded in 1990 by Thomas M. Rollins, former Chief Counsel of the United States Senate Committee on Labor and Human Resources and a graduate of Harvard Law School, who noticed the effectiveness of videotapes in learning during his study. He initially tried to create a government program to produce tapes for the public, but was unable to do so because of legal restrictions. After leaving office, he sought out top professors to create courses for sale to the public."

So, I hope that you'll explore Kahn Academy and maybe even The Great Courses. It is indeed possible to get a broad-based education without the cost of college, although the credential of a college degree is almost always a big assist in landing a career opportunity. These non-traditional avenues to higher knowledge may not be the complete revolution that appears to be imminent, but they offer quality, convenience, value, and college-level knowledge.

Will It Be Another Record-Setting Year For College Applications?

During the 2020-2021 admissions cycle, the rise of test-optional policies in response to the global pandemic resulted in a surge …

What is Parents' Role in the College Process?

We took a trip to Boston last week. As educational consultants, part of our job is to travel the country to visit college and boa…

Coalition for College: More Than Just Another College Application

Questions to Ask Your College Interviewer (It Works Both Ways!)

As a college applicant, you may already know the feeling of relief when you hit submit. But wait, you're not done yet! Some …