The majority of my readers here are high school juniors and seniors who are investigating information for their college process. There are also parents who are looking out for those high school students who are also their children. Obviously, one needs to graduate from high school in order to go to college. That's one of those "Duh!" statements. However, graduating from high school is an issue of prime importance here in America, since there has been such an ongoing debate about the effectiveness of public education and all its ancillary circumstances.

Well, my post's title today says, "Good & Bad News." I've always been one who wishes to hear the good news first, so what is the good news concerning the high school graduation rate in this country?

The good news is that a new study tells us that the high school graduation rate is currently the highest it has been since 1976. Philip Elliott, of the Associated Press, notes that the study states that "Officials said the steady rise of students completing their education is a reflection of the struggling economy and a greater competition for new jobs." That makes sense. Any high schooler who has even a marginal understanding of the economic situation in America and who has an eye for his or her future will understand the importance of completing high school. That diploma will open any number of doors, to a two- or four-year college, technical or business school, community college, the armed forces, or even a full-time entry-level job, assuming that the circumstances are just right. 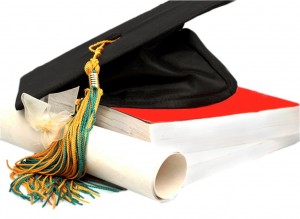 Okay, then. What's the bad news? Elliott notes that even though "The nation's high school graduation rate is the highest since 1976 ... more than a fifth of students are still failing to get their diploma in four years, the Education Department said ..." That's over 20% of high school students. Not an inconsiderable percentage. Let's look at some more facts from Elliott's good news-bad news article.

High government officials caution those students who are considering dropping out:

"If you drop out of high school, how many good jobs are there out there for you? None. That wasn't true 10 or 15 years ago," Education Secretary Arne Duncan said in an interview with The Associated Press.

The national dropout rate was about 3 percent overall, down from the year before. Many students who don't receive their diplomas in four years stay in school, taking five years or more to finish their coursework.

Some 3.1 million students nationwide earned their high school diplomas in the spring of 2010, with 78 percent of students finishing on time. That's the best since a 75 percent on-time graduation rate during the 1975-76 academic year ...

Among the most significant factors of the increase was the dire U.S. economy after the 2008 Wall Street meltdown. During the 2009-10 academic year, unemployment ranged from 9.4 percent to 10 percent.

"When I grew up on the South Side of Chicago it wasn't great, but I had lots of friends who dropped out and they could go work in the stockyards or steel mills and they could buy a home, support a family, do OK," Duncan said.

But those jobs are gone and won't come back, he said ...

... "The trends are hopeful but our high school dropout rate is still unsustainably high and it's untenable in many of our African-American and Latino communities. We have a long way to go here," Duncan said."

So, how should this information affect your thinking? If you're a high school student, you shouldn't even be concerned with graduation rates because you shouldn't even be thinking about not graduating. If you are a parent of a high school student, you should be thinking about the consequences of your child dropping out. The facts are not debatable. If your child drops out of high school, his or her future job chances and earning potential will be severely hindered. That's why you need to keep your finger on the pulse of your child's passage through high school.

How does a parent do that? First of all, communication is the key. When's the last time you sat with your child and asked him or her to tell you about what they're studying in school? I know; I know. Getting your teenager to talk to you is like asking them to get a root canal. However, discussions like this can possibly lead to discovering the first seeds of deeply rooted discontent about

their academics. You might be able to head off a sharp downturn in their grades by just offering up some simple questions and showing some genuine concern.

The other aspect of monitoring your child's high school performance is teacher conferences. Every school offers parents the chance to meet teachers and review students' class performance and overall attitude toward school. Getting to know your child's teachers is also important for the college process. One of the more important aspects of college applications is teacher recommendations. If you, the parent, are aware of who those teachers are and how they relate to your child, you'll be better able tyo advise your son or daughter about whom to approach for a college recommendation. Overall, your time spent getting to know teachers is time well spent.

Bottom line: Students: Don't drop out of high school. Parents: Pay attention to what's happening with your child's high school process. The goal: Graduation and on to college, trade school, military service, or the job force.

Can an Early Decision Candidate Apply Elsewhere Via Early Action?

I am applying Early Decision to Rice. Can I apply Early Action to other colleges?

Do all the other schools know what your early decision/early action school was? Does this play a role in whether to admi…

Switch to Early Decision After Applying?

My son wasn't positive about applying early decision prior to the November 1 deadline, but has become more committe…

Early Decision or Early Action? How Do We Choose?

Question: My daughter has a well balanced list of 10 colleges. How do we decide if she applies Early Action or Early Decision? I …