I could have called this "Different Types of Degrees," but I opted for a quick alliteration. Regardless of how it's titled, the information here is designed to tell you about some alternatives to the traditional four-year college degree approach to your higher education plans. A traditional four-year degree isn't the only way to land a good job with a solid salary.

What inspired me to address this topic is a news release touting a new Kiplinger Personal Financial article regarding several options outside of the time-honored four-year degree that provide the education and training needed to land meaningful work. We're all (well, if you're a resident of Planet Earth) aware of the skyrocketing costs involved with college over the past decades. There appears to be no relief in sight, unless the the "bubble" bursts, similar to what happened to the so-called "dot-com" bubble back at the beginning of the last decade.

Thus, many, if not most, high schoolers and their families today are looking for the most cost-efficient path between high school and marketable skills in the job world. Passing from high school to that first significant job can be an exciting or frustrating voyage. I have always been the type of person to consider alternative ways of accomplishing my goals. You could call me a duct-tape, paper-clip, chewing-gum kind of guy who knows that in some cases, getting the desired result doesn't always have to involve a process, technique, or materials one might see on Masterpiece Theater. 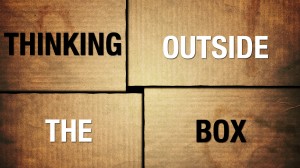 Yes, thinking outside the box can yield tangible rewards. For example, did you know about any of the following outside-the- "traditional"-box options?

- Certificates: Professional certification is an affordable way to increase your employment potential once you are on the job; especially in fields that don't require a bachelor's degree.

- Take two and transfer: Take your prerequisites at a local community college, where tuition and fees are often two-thirds lower, and then transfer to a four-year institution.

- Earn a BA in three: Graduating in three years lets you avoid a fourth year of college costs and you can start earning a salary a year sooner.

- Online Courses: The American Council on Education is evaluating the creditworthiness of MOOCs, or “Massive Open Online Courses" from partners such as Coursera, edX, and Udacity.

If not, you might find the Kiplinger article time well spent. Let's sample some excerpts from it.

4 Alternatives to a Four-Year College Degree

A traditional four-year degree isn't your only ticket to a good job with a solid salary.

It doesn't take a math major to see that something isn't adding up when it comes to conventional four-year bachelor's degrees.

Public-college costs have skyrocketed over the past five years, bringing the total average annual price of an in-state education to $17,860, according to the College Board. Private-college costs are even more alarming, approaching $40,000 a year. Students who have borrowed to pay those prices are entering into the workforce with an average of $26,600 in student debt, and many are carrying much more. ...

... If you are looking for an alternative to the traditional four-year degree at a residential college, you can find certificate or degree programs that will get you into the working world faster, cheaper or both.

1. Pick Up a Certificate

Almost 30 million jobs in the U.S. pay $35,000 or more and don't require a bachelor's degree, according to the Georgetown center. But that doesn't mean your education can stop after high school. Most middle-wage jobs -- $35,000 to $75,000 a year -- in fields with increasing demand, such as health care, information technology and public services, require some form of post–high school certification. ...

2. Get an Associate's Degree

Holders of associate's degrees are in increasing demand in today's workforce. In fact, employers are planning to hire one-third more associate's degree earners this year than last, according to Michigan State University's 2012–2013 "Recruiting Trends." That will far exceed the increase in demand for bachelor's degree holders. ...

A four-year degree may eventually deliver higher earnings, but it also requires a pricey outlay for tuition, room and board if you attend a four-year residential college.

4. Earn a BA Degree in Three

Although three-year degree programs have existed for decades (Bates College, a private institution in Maine, has offered one since the 1960s), increases in both public- and private-school costs have contributed to a recent surge in their popularity. Nearly 20 private schools have added three-year degrees since the economic downturn in 2008, according to the National Association of Independent Colleges and Universities. ...

So, you can see that there is more than one way to thread the needle of higher education. You high schoolers out there need to be sensitive to your family's financial situation. At the same time, you must also become aware of the consequences of student loan debt, a topic that I have written about at length. While your college dreams may be filled with "prestigious" visions of ivy, you should really take a trip to Planet Reality and check out some of the projected outcomes for your decisions there. Be creative. Don't just follow the crowd. The future (and credit rating) you save may be your own!