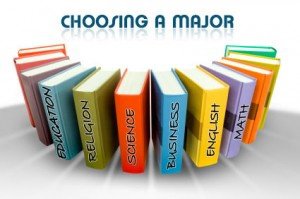 Can the major you select for your undergraduate college experience strongly affect your income or success in life? My answer, from the perspective of a professional college counselor, would be, "Probably not." However, there seems to be a kind of consensus out there that makes a direct correlation between what you study in college and the likelihood of a "better" or "worse" life's work.

I'm probably an excellent example of putting the lie to "What you study determines your future" theory. I wanted to be a nuclear scientist when I was in high school and was all fired up about MIT. Then, as my scientific vigor waned, I became more and more confused about what to study when I went to college. So, more or less by default, I started out in Business Administration. My first semester freshman year was extremely frustrating, as I had to deal with balance sheets and the problems sets of basic accounting. I found my heart much more into my English and music courses. (Hint: those two areas are in the Top 10 of "worst" college majors, which I'll discuss down below.)

Anyway, I was so disenchanted by my bean-counting experience and what it promised for the remaining aspects of a business curriculum, that I decided to do a college timeout at the end of my freshman year and joined the Navy for some focus and sightseeing. I did that and tried to get into the Navy's journalism school due to my love of writing. Well, that didn't work out and I ended up on an aircraft carrier (the USS Intrepid (CVS-11), which is now a finely restored air museum in New York City's harbor) in Tonkin Gulf and other exotic places. When I was discharged, I transferred from my original small liberal arts college to a large state university and changed my major to music history and literature (a fine arts major that ranks as #2 on the "Worst Majors" list). That's where my heart was and I had no idea it was such a "worst" major.

To make this boring story shorter, just let me recap the job trail my music degree has blazed for me. In order, after graduation up to now, I have worked jobs as an assistant manager of a retail stereo store (there was a music connection there), a production systems analyst for a major clothing manufacturer (military training link), a technical editor for a defense contractor (again, military and writing), an independent college admissions counselor (starting with coaching my children for the SAT), an education services director for a regional newspaper (college- and writing-related skills), a college planner for a financial services firm (college and writing again), and finally parlaying my admissions counseling into several increasingly successful online business ventures and college-related consulting work.

I'm leaving out a lot of ancillary accomplishments, but my point is to support my rationale from above (repeating for emphasis): "Can the major you select for your undergraduate college experience strongly affect your income or success in life? My answer, from the perspective of a professional college counselor, would be, 'Probably not.' "

So, let the college major chooser beware. It cuts both ways. I love what I'm doing and feel as though my (generally) liberal arts education has enabled me to tackle a number of diverse jobs well. However, I would like to submit for your consideration an article that may or may not have been written for its potential sensationalism. The title is Worst College Majors for Your Career. Here's an excerpt and that dreaded Top 10 list.

Make no mistake: An undergraduate degree can improve your employment prospects and paycheck size. A high school graduate earns 40% less than someone with a bachelor's degree and is more than twice as likely to be unemployed. But not all college majors are created equal. In fact, grads with certain majors sometimes fare worse in the labor force than workers who stopped studying after high school.

Considering the time and expense that goes into earning a college degree, knowing whether your course of study is a career-killer is powerful knowledge indeed. That's why we analyzed the jobless rates and salaries for graduates with the 100 most popular majors to come up with our list of the ten worst values in college majors.

Using data from Payscale.com and Georgetown University's Center on Education and the Workforce, we looked for majors whose graduates—both recent grads (within the past five years) and those well into their careers—face a brutal combination of low compensation and high unemployment. We also worked with Payscale to determine the likelihood that recent graduates from each major would end up working in retail, where a college degree isn't always required, rather than in their field of study. A ratio of 1.0 is the norm; a ratio of 2.0 means a graduate of that major is twice as likely to work in retail as the average college grad. ...

There's also a lengthy, spirited discussion about this on College Confidential. Take a look at the opinions there and feel free to add your two cents. I think you know where I stand on this issue.

Finally, one book that has been a source of inspiration for me and many others is Do What You Love, The Money Will Follow: Discovering Your Right Livelihood by Marsha Sinetar. The title perfectly explains my viewpoint.