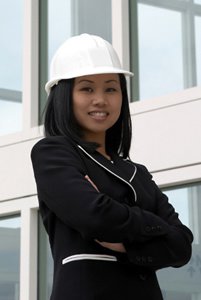 Have you ever taken a stroll through the campus of MIT, RPI (Rensselaer Polytechnic Institute), Caltech, or even Carnegie Mellon University? What's the one most apparent thing you notice about the student bodies? Well, to me, at least, it's the fact that there are more men walking around than there are women. This raises the question: Why is that?

Well, the obvious answer is: Women don't naturally, in general, gravitate to technical fields. This raises the same question: Why is that?

A new study by the American Sociological Association proclaims "Women Aren't Becoming Engineers Because of Confidence Issues." What's up with that?

It notes, "The study found that the real issue for female engineering students is their lack of 'professional role confidence.' Among other things, this term encompasses people's faith in their ability to go out into the world and be professional engineers and their belief that engineering fits their interests and values, which the study authors refer to as 'expertise confidence' and 'career-fit confidence,' respectively."

Okay, let's take a closer look at what that means.

The study goes on to say:

“Women engineering students go to the same classes, take the same tests, and get the same GPAs as men, sometimes even higher," said the study's lead author Erin Cech, a Postdoctoral Fellow at Stanford University's Clayman Institute for Gender Research. “But, what we found is that the women in our study developed less confidence in their engineering expertise than men did and they also developed less confidence that engineering is the career that fits them best, even though they went through the same preparation process as men."

So, why do women engineering students develop significantly less confidence than men?

“It stems from very subtle differences in the way that men and women are treated in engineering programs and from cultural ideologies about what it means to be a competent engineer," Cech said. “Often, competence in engineering is associated in people's minds with men and masculinity more than it is with women and femininity. So, there are these micro-biases that happen, and when they add up, they result in women being less confident in their expertise and their career fit."

I like that word "micro-biases." These are the subtle attitudes that women infer when they are in the presence of male professors and classmates. It must go back to the old argument that girls are less apt to excel in math and science then their boy counterparts are.

This is an interesting study. If you are a female headed to college and are considering a technical/engineering course of study, I urge you to read the entire study to see if you agree or disagree with the results. Hopefully, you'll see that you have just as much potential to realize your dreams of becoming an engineer as those nerdy guys who sit across from you, with their taped eyeglasses frames and pocket protectors. You go girl!