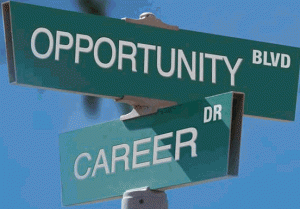 If your college search includes a criterion relating to an increased likelihood of getting a job at graduation, then you might care to consider a large state university. Why? Well, in a Wall Street Journal article reported in Yahoo! financial news, a headline reads Companies Favor Big State Schools With One-Stop Shopping for Graduates With Necessary Skills. That seems to make sense, doesn't it? "One-stop shopping." Most of today's corporations don't have a lot of time to go scouring the creeks and valleys for talented prospects, although there are still a few out there that are willing to go the extra mile (or creek) to find the perfect-fit new hire.

Penn State leads the pack and comes in at #1 in these WSJ rankings. PSU attracts the most companies to its hiring sessions and its career placement department has had a long history of success. All this, however, is not to say that you won't be able to find a great job if you go to a small, private, liberal arts college. Many small schools will be happy to trot out their placement records for you. Also, in my view, it's not so much the school (with the possible exception of the size of its alumni network) as it is the personal engine that a graduating senior possesses. I have known quite a few small-college graduates who have scored superb jobs at graduation, thanks to their innate excellence both as students and as people. So, don't let this survey have an undue effect on your carefully considered candidate college list.

Who are the top colleges for job recruiting? Let's have a look.

Penn State, with its main campus located in University Park, Pa., has undergraduates enrolled in more than 160 different majors. It has 20 undergraduate campuses, 10 of which offer University-owned housing. The school is 54% male and 46% female, representing 50 states and 131 countries. The average student/faculty ratio is 17:1.

This Texas school's main campus is in College Station, about 100 miles northwest of Houston and 100 miles northeast of Austin. The school has 10 individual colleges and boasts more than 800 student organizations ranging from athletics and recreation to professional and community service.

3. University of Illinois at Urbana-Champaign

University of Illinois at Urbana-Champaign, centrally located between Chicago, Indianapolis and St. Louis, has more than 150 majors and 1,000 student organizations. Students come from all 50 states and 118 countries. The school is 54% male and 46% female.

More than half of this Indiana university's students are from the state (62%) with 38% coming from elsewhere. Its West Lafayette campus offers more than 200 majors for undergraduates along with 18 intercollegiate sports teams and more than 850 student organizations.

Arizona State University is situated less than 15 miles from Phoenix, with four campuses in the metro Phoenix area, including an Arizona State air field for aviation students. The university offers 250 majors to its undergraduates -- who are 71% in-state. There are 52% women compared to 48% men, and more than 30% of freshmen graduate in the top 10% of their high school class.

Some key points from the article's text:

State universities have become the favorite of companies recruiting new hires because their big student populations and focus on teaching practical skills gives the companies more bang for their recruiting buck.

Under pressure to cut costs and streamline their hiring efforts, recruiting managers find it's more efficient to focus on fewer large schools and forge deeper relationships with them, according to a Wall Street Journal survey of top corporate recruiters whose companies last year hired 43,000 new graduates. Big state schools Pennsylvania State University, Texas A&M University and University of Illinois at Urbana-Champaign were the top three picks among recruiters surveyed.

Recruiters say graduates of top public universities are often among the most prepared and well-rounded academically, and companies have found they fit well into their corporate cultures and over time have the best track record in their firms.

Employers also like schools where they can form partnerships that allow them to work with professors and their students, giving them an inside track when it comes time to make offers for internships and jobs . . .

. . . So where are Harvard University and other exclusive schools? While many companies that answered The Journal's survey say they recruit and hire Ivy League graduates, far fewer ranked them as top picks.

Claudia Goldin, a Harvard economics professor and lead researcher on a study tracking Harvard graduates' career paths, said, "We have none of the basic bread-and-butter courses that serve you well in much of industry." What's more, Ms. Goldin said, at Harvard, more than 55% of graduates went on to a doctorate degree, according to a recent survey, so they tend to stay in a first job for a short period of time—often a year or less. It's an observation recruiters in the Journal's study also made . . .

. . . Some companies like certain schools so much they set up offices nearby. The University of Michigan (No. 7) "was a huge selling point" in Google Inc.'s (NasdaqGS: GOOG - News) decision to open a sales and operations office in Ann Arbor, Mich., in September 2006, said recruiting manager Kyle Ewing. The company also opened an office in Pittsburgh where it hires computer-science graduates from Carnegie Mellon University (No. 10 overall, No. 1 for computer science), for the same reason.

Campbell Soup Co. (NYSE: CPB - News), Aernnova Aerospace SA and Spanish tech company Barracuda Networks Inc., among others, also set up facilities near the University of Michigan, which ranks in the top 10 across six majors . . .

. . . Partnerships can help boost brand awareness among talented students. The economic climate led Dennis Cornell, head of recruiting for LSI Corp. (NYSE: LSI - News) of Milpitas, Calif., to narrow his on-campus recruiting to three schools where the tech firm wanted to expand its reputation: Purdue, University of Colorado-Boulder and University of California at Berkeley (No. 15 on the overall list, No. 2 for computer science majors and No. 12 for engineering majors).

For the full list of the Top-25 recruiting schools, click here. And, as always, be sure to read the comments. They're always quite enlightening.