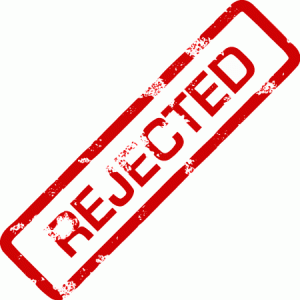 Yesterday was The Big Day. The Ivy League released their admission decisions and high school seniors all over the world got the news they had been so anxiously awaiting since late December. Some of those seniors are on Cloud Nine today. Many others are in a deep funk. If you are one of those deep funkers, I'd like to say some things to you.

Getting a rejection letter from a college or university doesn't make you a bad person. Unfortunately, some high school seniors see themselves in a less-than-positive light when they read the bad news from a highly desired institution.

Take a little time to feel disappointed about not getting into your most-desired school(s). It's perfectly natural to feel bad. Don't dwell on it, though, and, by all means, don't develop an obsessive attitude about it. Don't hate that school from this moment on. Don't view successful candidates as elitist snobs. Accept the fact that you didn't make the cut--for whatever reason--and get on with your life.

Embrace those schools that have embraced you. Select the one that best suits your needs and prepare to have a great higher-education experience. Yes, indeed; there is life after rejection.

If you would like to share your feelings or merely read those of others who have also been denied, check out the College Confidential discussion forum. It's where the most interesting high schoolers, college students, and parents gather to share their wealth of experience and knowledge.

If you would also like to voice some of your thoughts here, please do. You're always welcome.