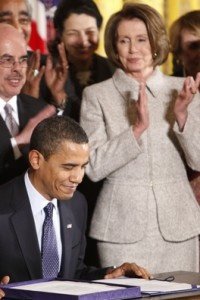 News of the passage of the President's giant health care bill this past week has overshadowed the simultaneous passage of a new student loan bill that was neatly tucked into the health care legislation. This has caused some controversy. As with most political issues, there are loud pros and cons.

Let's take a look at one example of those pros and cons. If you're going to be a college applicant soon, or if you're a current college student seeking money for college, this may be of interest to you. First, a generally pro viewpoint.

More needy college students will have access to bigger Pell Grants, and future borrowers of government loans will have an easier time repaying them, under a vast overhaul of higher education aid headed to President Barack Obama's desk.

The measure would force private commercial banks out of the federal student loan market, cutting off billions of dollars in profits for the institutions. Students will take out their loans through their college's financial aid office, instead of using a private bank.

The banks would no longer get fees for acting as middlemen in federal student loans. The government would use the savings to boost Pell Grants and make it easier for some workers to repay their student loans. In addition, some borrowers could see lower interest rates and higher approval rates on student loans.

Since the bank-based loan program began in 1965, commercial banks such as Sallie Mae and Nelnet have received guaranteed federal subsidies to loan money to students, with the government assuming nearly all the risk. Democrats have long denounced the program, saying it fattened the bottom line for banks at the expense of students and taxpayers.

The revamping of student loan programs was included in the final health care package passed by Congress on Thursday. The House approved the bill by a vote of 220-207, hours after the Senate passed it by a vote of 56-43. No Republicans in either chamber voted for the bill.

The legislation, an Obama domestic priority that was overshadowed by the health care issue, has widespread reach. About 8.5 million students are going to college with the help of Pell Grants.

Congressional allies of the student loan industry attacked the overhaul as an over-reaching government takeover that will kill banking jobs. The legislation substitutes an expanded direct-lending program by the government for the bank-based program, directing $36 billion over 10 years to Pell grants, for students from low-income families.

But Sen. Tom Harkin (D-Iowa) praised the bill as a victory for middle-class families. "Now they'll have the assurance that their kids will be able to afford to go to college and again, when they get out, they won't be burdened with a huge debt," he said.

Less than they wanted

Still, the changes do not go as far as Obama and House Democrats wanted. That is because ending fees for private lenders would save less money than they anticipated, according to budget scorekeepers. The bill is now expected to save $61 billion over 10 years.

As a result, the Pell Grant increase is modest and still doesn't keep up with rising tuition costs. Advocates had sought bigger increases. "The increases in the Pell Grant are better than nothing, but they are still quite anemic," said analyst Mark Kantrowitz, publisher of the student assistance Web site FinAid.org.

Private lenders still will make student loans that are not backed by the government, and they still will have contracts to service some federal loans. But the change represents a significant loss to what has been a $70 billion business for the industry.

Even as the Democrats' decision to attach the student loan overhaul to the health care package virtually ensured its passage, banks fought fiercely up to the last minute, prompting some lawmakers such as Sen. Ben Nelson, a Democrat from Nebraska, where Nelnet has its headquarters, to cast their vote against the overall bill.

The legislation will make it easier to pay back student loans, by reducing the share of income that a graduate must devote to loan payments and by accelerating loan forgiveness - but not right away. Those who take out new loans after July 1, 2014, will have to devote 10% of their income to payments, down from the current 15%, and those who keep up their payments will have their loans forgiven after 20 years, reduced from the current 25.

Community colleges, the main provider of higher education for most low-income Americans, were set to receive $10 billion under the administration's original plan but will instead get just $2 billion for job training.

Historically black and minority-serving colleges will get the $2.55 billion originally earmarked for them in the bill.

• More eligible students could get a full Pell Grant.

• Some college graduates will have an easier time repaying loans. The government will essentially guarantee that workers in low-paying jobs will be able to reduce their payments. Current law caps monthly payments at 15% of these workers' incomes; the new law will lower the cap to 10%.

(By the way, check out the comments following this story.)

Where's the Outrage Over What Just Happened to Student Loans?

Competition and choice have been taken away in the student loan market. If the tables were turned, Democrats would be crying foul and demanding an ethics investigation. The American people deserve to know what happened.

So, here we are -- with a majority of Americans feeling distinctly un-American as a partisan takeover of health care was engineered last weekend. But do Americans realize that Congress just took over student loans as well? Unlikely.

Now, not only will government increasingly be making decisions about individuals' health care, but students will also have to deal exclusively with the government to get the financing they need for college. The government will be in charge of the delivery of $1 trillion in federal student loans over the next 10 years. That means 19 million students will have no where to call but to 1-800-DEPT-OF-ED. -- I'm sure the calls will be handled in the order in which they were received. Good luck with that. Competition and choice have been taken away in the student loan market. Let's face it, this experiment can only end badly.

It's frustrating that a law this sweeping was swept under the Obamacare rug. The Senate never introduced a student loan reform bill. It never held a hearing. And proposed changes to the student loan program were never even considered by lawmakers at the committee level.

"Schoolhouse Rock's" Bill is red faced with shame. What's worse is that The Wall Street Journal editorial page and The Washington Times reported on Thursday about certain Democratic Congressmen giving certain non-profit companies in their states non-competitive carve outs...And these are companies that already didn't pay taxes. And there was even a special "carve out" for Democratic Sen. Kent Conrad of North Dakota. But it was taken out at the last minute because it was just too unseemly. At least we know they have standards!

If the tables were turned, Democrats would be crying foul and demanding an ethics investigation. The American people -- and its students -- deserve to know what really happened.

So, take your pick of positions. Is the new student loan bill a good thing or a bad thing? I'd like to know what you think. Post a comment below.