The March of Graduation Rate Madness 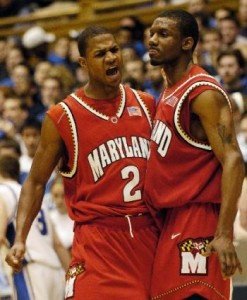 As I write this, March Madness (the NCAA basketball tournament, for those of you who have just arrived from Mars) is in full swing. Betting pools everywhere are buzzing about the favorites and their upsets. The sports excitement surrounding this time of year sweeps the nation. However, the whole point of college seems to disappear in the face of such rabid enthusiasm.

In an interview with ABC News, Secretary Duncan had the following to say about the graduation rates of NCAA players:

"If you can't graduate two out of five of your players, I just think your priorities are out of whack," Duncan told ABC News. "What it tells me is there is a lack of institutional commitment."

"I just don't know why we tolerate those handful of places whose values are not proper," Duncan told ABC News.

“The overall majority of these players will never go on to make a dime playing basketball, they're making money for their universities and they're going to have nothing to show for it."

That should send shivers through some of the bigger basketball (and possibly other sports) programs in America. Here are some excepts from Bradley Blackburn's article about the Duncan interview:

Secretary of Education Arne Duncan has a game-changing idea to improve academics in college basketball. Some of the nation's top-seeded teams would be knocked out of March Madness next year if his rule goes into effect.

Duncan has proposed that the NCAA bar any team from participating in the post-season tournament if they fail to graduate at least 40 percent of their players. Duncan called 40 percent "a low bar" that should be easy for athletic programs to achieve, and he thinks such a rule would immediately improve academic results.

If the rules were in place for this year, 12 teams including top-ranked Kentucky, which graduated only 31 percent of its players, would not be eligible.

Today, Duncan made clear his belief that colleges can do better.

"If you can't graduate two out of five of your players, I just think your priorities are out of whack," Duncan told ABC News. "What it tells me is there is a lack of institutional committment."

Duncan himself was a star on the basketball team at Harvard, and he knows that sport is about a lot more than national championships.

"My father taught me a long time ago that a university has a dual mission, to educate its students and to prepare them for life," he said Wednesday on a conference call with reporters. "If a college fails to educate all of its students, then that university has failed its mission. It's time to start holding coaches and institutions more accountable for the academic outcomes of their athletes."

Duncan based his request on a study of graduation rates for NCAA tournament teams, conducted annually by The Institute for Diversity and Ethnics in Sport at the University of Central Florida. The study, based on data from the NCAA, found that 69 percent of this year's teams graduated at least 50 percent of their student-athletes in recent years, but 12 teams did not meet the 40 percent threshold Duncan is proposing.

"I just don't know why we tolerate those handful of places whos values are not proper," Duncan told ABC News.

An NCAA spokesman told The Associated Press today that a ban based on graduation rates unfairly penalizes current players for graduation rates of students from previous years. The NCAA already imposes academic sanctions on schools that fail to maintain education standards under a formula they call the Academic Progress Rate.

Part of the problem, study author Richard Lapchick believes, is rooted in unrealistic expectations among players for professional success.

"I think a lot of this has to do with the phenomenon of young African-American men, in particular, dreaming the dream that they're going to be able to play professional basketball," Lapchick said.

The dream of success in the pros comes true for some players, according to Maryland coach Gary Williams. In a radio interview this week, he defended his program's graduation rate, which at 8 percent was the lowest of all the schools in the study.

"First of all, 1999-2003, in that period we had four players leave early to go to the pros. They are all still playing professionally," Williams said on the "Dan Patrick Show." "They haven't come back and gotten their degrees yet. Hopefully, they will. But they've made millions and millions of dollars during that time that they left. In other words, they didn't have their degree, but it all depends on how you measure success in your life."

It is a sentiment Duncan disagrees with. "The overall majority of these players will never go on to make a dime playing basketball. They're making money for their universities and they're gonna have nothing to show for it," said Duncan to ABC News.

Williams said that he's proud of his school's graduation rate and added that the University of Maryland spends more than $1 million every year to support student-athletes' academics . . .

Interesting stuff, huh? I'm glad that Coach Williams is proud of his school's graduation rate. I wonder if he's just as proud of his team's eight-percent rate.

What do you think?