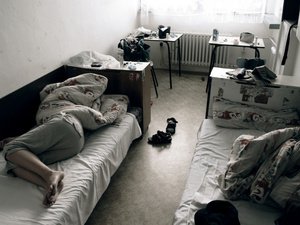 The topic of mental well-being among college students is a timely topic, especially now, in light of the recent Arizona rampage shooting. The shooter was a recently expelled community college student whose scary behavior in class and on the Web was the stuff of TV dramas and true-crime programs. Bill Curtis' American Justice comes to mind.

College these days isn't what it was when I was enrolled, or even what it was when most of today's college students parents were enrolled. What has changed? One thing, which is a favorite topic of mine, is the realm of instantaneous global communication. Youth now have the capability to reach out and touch one another at any moment from anywhere on earth. Of course, this plays right into the hands of my all-time favorite theses for a paper I wrote for a college humanities course: Regardless of how great, noble, or needed humanity's innovations are, men and women will eventually find a way to pervert them into something negative and destructive. Ergo, the cumulative effect of modern day technology and its pressure on our young people.

A very timely and interesting article on the National Public Radio site discusses these issues in depth. See if you know of anyone in your orbit who may be under the dark clouds detailed here.

Depression On The Rise In College Students

Researchers say severe mental illness is more common among college students than it was a decade ago, with most young people seeking treatment for depression and anxiety. A study presented at the American Psychological Association found that the number of students on psychiatric medicines increased more than 10 percentage points over the last 10 years.

A large part of the reason for this increase has to do with the success of treating younger high school-age students. Today, there are more effective public and private sector counseling programs for children. As a result, health experts say, more students with learning disabilities and emotional problems manage well during high school years and then go on to college.

"These are youngsters many of whom in the past wouldn't have even finished high school," says Dr. Katherine Nordal, with the American Psychological Association. "Special education services in high school mean that more students with emotional difficulties and special needs are going on to college," with their more emotionally stable counterparts.

Nordal points to onerecent study that showed approximately one out of every four or five students who visits a university health center for a routine cold or sore throat turns out to be "depressed."

While most colleges and universities have some form of mental health counseling, the majority are understaffed and overwhelmed, Nordal says. But treatment is there for students who persist and Nordal offers some advice to friends and family who want to help identify problems.

Symptoms grow slowly and insidiously, she says, over time.

"It's not like flipping a switch and someone has normal mood and behavior one morning and then wakes up the next morning in some other kind of zone," she says.

There are also certain behaviors that should clearly sound an alarm: If young people are distancing themselves from friends, losing interest in things that they once enjoyed doing, becoming irritable or angry, having outbursts toward people who were close to them, experiencing changes in eating or sleeping patterns, having unexpected, unexplainable episodes of tearfulness — these are all potential symptoms of depression, anxiety or other emotional problems.

These problems can be exacerbated by the very nature of going off to college. For many young people, this is the first time they have left home for any period of time. They are outside the familiar and safe family structure, complete with parental discipline, control and advice. They may find themselves in a challenging new environment with a completely new set of peers.

Unfortunately, many new friends, says Nordal, just don't have the "reference point" on the student's "normal" behavior to make a judgment about erratic behavior or changed mood. Often it is close friends and family who know the student best — the new friends are just beginning to get to know them.

Even so, Nordal says if a student's new friends notice what appears to be obvious distance, difficulty or depression, they should suggest the student seek counseling. They can even pressure the student, she says, because in some cases, treatment can be life saving.

Dr. Jerald Kay, a child psychiatrist and chair of psychiatry at Wright State University School of Medicine in Dayton, Ohio, specializes in adolescent health and has worked with American Psychiatric Association committees on college mental health. He co-authored the book Mental Health Care in the College Community.

He was also not sleeping well, was no longer relating to his friends and had lost 15 pounds in just six weeks. Kay says soon after beginning psychotherapy, the student divulged that he had a plan to hang himself in the closet of his dormitory, on the clothes hook.

Luckily, Kay was able to successfully treat the student with psychotherapy and an anti-depressant. Today, the student is doing well. He has gained weight, is sleeping better and most importantly, his outlook on life has improved. So have his relationships with his friends, whose encouragement to get help likely saved his life.

While this student was able to keep his academics on an even keel, Kay says that's often not the case.

"A lot of the young people I see don't go to class," he says. "They're not able to complete assignments and you get the sense that academically they're going down in a spiral" and often drop out of extracurricular activities as well, and spend more and more time alone.

Kay says it is effective once students do get into treatment.

"Young people have a resilience, and with intervention, it can be life changing," he says.

For more background on this issue, see this thread on the College Confidential discussion forum. Feel free to comment on this topic below.