I strolled through the grounds of a local college campus last week. After 10 minutes of taking in all the pretty grass and multicolored leaves, I started to notice the students. The scene was like something out of the movie Zombieland. The overwhelming majority of students walking to and fro were zoned out with far-away looks, as they intently gazed at their smartphones. Twice, I saw a student bump into another because he was too enraptured with whatever message or image was currently appearing on the tiny screen in his hands.

This is to say nothing of the iPodroids who can be easily identified by their faraway gaze and the wires dangling from their ears. That's a rant for some other time, though. Let's talk today about the perils of smartphones on campus, especially as they apply to personal smartphone security. 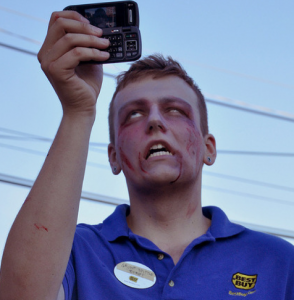 I found an interesting article in the Chronicle of Higher Education about this very topic. I'll highlight that below. To get an insider's view of smartphone obsession, check out this confessional by a Boston College junior, who admits, "I am addicted to my iPhone." But, back to security.

As technology advances, so do the threats posed to its users and their devices. One growing area of concern for colleges, highlighted in a report released today by the Georgia Tech Information Security Center and the Georgia Tech Research Institute, is the increasing number of attacks on smartphones and their mobile Web browsers.

The resources we have on these devices are different from what you have on your desktop or laptop," says Mr. Ahamad, who is the director of the Georgia Tech Information Security Center.

Small screens are a problem because they lead to reckless Web browsing. To free up screen space, the URL bar often disappears after the page loads, leaving the user unable to see the Web address after clicking a link. This makes it easier for a user to mistakenly land on a page containing viruses or other malware, including apps that can swipe user information ...

This ties in with the Boston College addict's behavior when she reveals:

While brushing my teeth, I answer a call and luckily don't offend anyone with my multitasking because it's just an automated recording from CVS (whoops, a bit behind on a prescription pick up). After hanging up on the robot woman, I figure… I could make it to Cleveland Circle for a coffee if I can catch the BC bus… I check the BC Translocation app and to my surprise, there's a bus four stops away. Ha, success! I sprint out the door and catch the bus just in time ...

Thus, it's easy to see how all kinds of malicious outcomes can visit students' smartphones, as they go about their daily routines with their phones surgically connected to their hands. As the Chronicle article also cautions:

In addition to smartphone vulnerabilities, the report noted two other emerging threats aimed at capturing and exploiting user data from any kind of computer. These were search poisoning, or using search-engine optimization to make malicious links appear higher in a search, and the use of stolen cyber data for marketing. Botnets, which are networks of computers enslaved to one remote computer that generally promotes malware, are also becoming more sophisticated as users continue to share more personal information over social-media networks, making it easier to capture this data and sell it to the highest bidder ...

So what's a harried college student to do? Well, my recommendation is to return to at least some semblance of the Here and Now. Relate to what's happening around you. Multitasking can be cool, but dividing one's capacity for attention to detail into segments dominated by phone technology can be a hazard to yourself, your phone's security, and--especially--your fellow zombies.