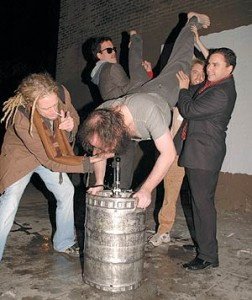 I think we're all pretty much aware that binge drinking in college (and even high school) is a major concern for parents and school administrators. Unfortunately, it seems as though almost every school year, we read of a senseless death or two related to drinking. Scenes of Animal House Delta fraternity's pledge activities and general partying come to mind. Like any other public health problem, such as obesity and drug use, the government and special interest groups spend hundreds of thousands of dollars every year on Public Service Announcements (PSAs), which are supposed to help us become aware of the problem and, hopefully, change our behaviors.

Personally, I've always been somewhat skeptical about the effectiveness level of these announcements. I try to imagine a typical college underclassman, particularly a freshman, watching TV (if he can pull himself away from his smartphone, iPad, Xbox, iPod, etc) and seeing one of these PSAs. I'm wondering is his reaction might be, "Geez. They're telling me that drinking can be harmful to my health. Well, then, it's time for me to shape up!" LOL. I don't think so. How about you?

Well, University of Missouri researchers have discovered that of those viewing anti-drinking PSAs, the ones who respond to them respond better to a positive message, rather than a negative one. I presume that this falls under the rubric of catching more inebriated flies with honey rather than vinegar. Here's the scoop on that study:

“We found that gain-framed anti-binge drinking messages featuring relationships and academic performance were much more effective in convincing students to avoid binge drinking than negative messages," Lee said. “College students want to know how an action will help them, not how they could be hurt. Not many college students respond well to threats."

For the study, participants received either gain-framed or loss-framed printed PSA messages addressing each of the four areas of interest. The researchers observed that participants responded most positively to gain-framed messages showing that avoiding binge drinking increases the quality of relationships. Academic success was ranked second, followed by messages touting better health to those who do not binge drink. Seoyeon Kim, a master's student at the Missouri School of Journalism, believes this study shows the need for increased use of gain-framed messages when addressing college students.

Because this study focused on printed PSAs, Lee hopes to continue this line of research by looking into message framing for social media and online PSAs. This study was co-authored by Paul Bolls, an associate professor at the Missouri School of Journalism. The study was presented at the Health Communications Division of the International Communications Conference in May.

For more background and pertinent data regarding binge drinking, see this study.