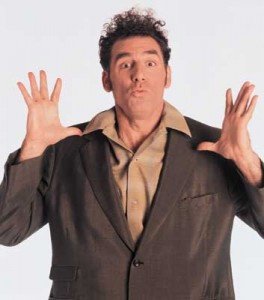 Remember that Seinfeld episode where Kramer hired a personal assistant to help him with all his idiotic schemes for Kramerica Industries?

Well, a forward thinking Georgetown University sophomore must be a Seinfeld fan (or at least a Kramer fan) because he's advertising for his own personal assistant:

The successful applicant will do laundry, gas up the car and handle other 'everyday tasks' for busy sophomore

Georgetown University sophomore Charley Cooper is busy. He has a full load of classes, hours of homework and a part-time job at a financial services company. He's also worried about an illness in the family. And then there are all the other time-consuming aspects of college.

The solution? A personal assistant.

Cooper, 19, logged on to the university's student employment Web site last week and posted an ad for someone to tackle "some of my everyday tasks," such as organizing his closet, dropping him off and picking him up from work, scheduling haircuts, putting gas in the car and taking it in for service, managing his electronic accounts and doing laundry (although the assistant will be paid only for the time spent loading, unloading and folding clothes, not the entire laundry cycle).

The successful applicant can expect to work three to seven hours a week and make $10 to $12 an hour, although "on occasion it will be possible to work additional hours and/or receive bonuses at my discretion." Preference will be given to Georgetown undergraduates, Cooper says in the listing, and the assistant can spread his or her tasks throughout the day.

"As my PA you will receive an email once a day by 9:00 am with a task list for that day and a time estimate for each task," Cooper wrote in the job listing, which was first reported by the student newsmagazine, Georgetown Voice. "Important tasks will be bolded on the list and must be done that day (even though everything on the list should theoretically be finished on a daily basis). At the end of the day you will send me an email telling me what tasks are incomplete or that all tasks have been completed."

Could this be a publicity stunt? Cooper said in a Facebook message to a reporter that he is completely serious and has heard from several interested students, in addition to a few prank applicants. A university spokesman confirmed that Cooper is a student and has posted the job listing.

Cooper would answer questions only through messages sent to his Facebook account, which features a photo of a man in a striped polo shirt holding a champagne flute. He provided only brief details about himself, his family and his job: He grew up in Bethesda and graduated from the Landon School, a private boys school, in 2008. He lives in the dorms and hasn't declared a major but is planning to double-major in finance and management, perhaps with a minor in Spanish. His Linked-In profile says he is considering jobs in finance, entertainment or both. In the spring, he got a part-time job in the D.C. offices of a financial services company that he didn't want to identify, where he works as an assistant and manages a team of interns.

Cooper said he decided to post the help-wanted ad after a family member had a cancer diagnosis and began to make arrangements for treatment at Georgetown University Hospital. Cooper says he hopes to start interviews in a few days, after the craziness of midterms has passed. "I know that if I didn't already have a job, I would definitely be interested in a job that pays 10 to 12 dollars per hour and is flexible in terms of hours," he said.

The Georgetown Voice posted the listing on its blog Friday under the headline, "Georgetown sophomore seeks personal assistant, takes premature self-importance to whole new level." Soon, dozens of derogatory comments popped up accusing Cooper of furthering the stereotype that Georgetown is filled with wealthy kids who can't do anything for themselves.

"Everybody probably knows who he is now," said Sarah Murphy, 19, a sophomore English major who heard about the job listing from friends. "People are not happy. They think he's just ridiculous and full of himself."

But other students were more understanding. "Listen, I think if there's a market for it, and someone wants to do it, all the more power to him," said Corey Sherman, 20, a junior international politics major who has two jobs. "Maybe he just wants the personal touch -- knowing the human being folding his underwear." (Earlier in the week, a Georgetown junior posted a similar job listing, according to the Georgetown Heckler, a campus humor blog. The student did not respond to an e-mail Thursday and it could not be determined whether the listing was a parody.)

Although the posting created buzz, outsourcing dull duties is not a new thing at Georgetown or other universities. Some students pay to have their group houses or apartments cleaned, or contract with Soapy Joe's, a company that will pick up dirty laundry from the dorms and return it clean and folded within days.

"Whenever someone gets wealthy or famous, things can fall through the cracks," she said. "There's no chance someone like Scarlett Johansson or Angelina Jolie end up on all of those covers without a team of people."

"There's a benefit to learning to do things on your own," she said. "I know -- college is stressful, there's a lot to do. But the pressures are still nowhere near needing a personal assistant."

I recall my college daze, so to speak. A lot of stuff, both school- and personal-related, slipped through the cracks. The closest I came to having a personal assistant was being married. My wife took care of some of the stuff that Charley Cooper here needs to have done, but mine wasn't a business relationship and I don't think Charley is looking for a long-term commitment. Mine has lasted 40 years so far.

It appears as though Charley is well on his way to a successful career, whatever he ends up doing. Creative thinking and clever use of resources are two keys to getting what you want out of life. Regardless of what his critics are saying about his lack of learning to manage a complex life, I like Charley's approach. He's well on his way to founding Coopermerica Industries.