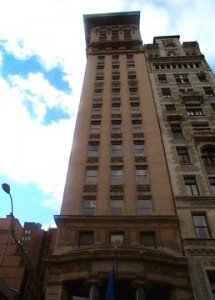 Some parents keep their eye on only college tuition costs when considering which schools might be affordable for their sons or daughters. The smart ones, though, look at what's known as the "student budget." The student budget includes not only annual tuition but also room and board, various fees, and estimates on miscellaneous expenses and even travel. Talk about running up the numbers!

Our friends at CampusGrotto.com have put together a list of the most expensive college dorms. At least my mind boggles when I see what it costs to live in some of these dorms for less than nine months, especially when I think of having to share living quarters with at least one other person, in most cases. Let's do some math:

Granted, that number includes food, which may or may not be for three meals a day. However, how many college kids do you know who actually get up early enough seven days a week to eat breakfast, let alone lunch? Many, if not the majority, of college kids despise campus food, so they spend laundry money and other cash on eating out. Parents can just see their hard-earned dollars flying out those dorm windows.

Anyway, I thought it would be fun, if not painful, to take a look at the most costly room and board plans in America. Campus Grotto has even been kind enough to supply some picture of the top-of-the-line digs.

The price of room and board at college continues to increase just as much as the rate of tuition. The average room and board expense for the 2008-2009 school year at public colleges is $7,748 and $8,989 at private colleges, an average cost that has gone up about 5% since last year. Looking at the rankings, many of the most expensive dorms are where you would expect them to be; in the heavily populated areas of California, New York and Washington DC.

Room and board is a huge expense. Take NYU for example, which ranks in with the 42nd highest tuition, but with room and board added in it gives NYU a total cost of over $50,000, placing it as the 3rd most expensive school in the nation. Take Sarah Lawrence College as another example; tuition at Sarah Lawrence is $39,450 making it the 8th highest tuition wise, but add in the whopping $13,716 for room and board and it easily becomes the most expensive college in the country.

These rankings are figured by taking the estimated cost of room and board for the school year. Prices are for a standard double room.

College Costs Fees Housing room and board Tuition Admit This