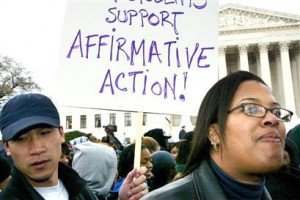 One of the quicker ways to start an argument these days is to bring up the issue of Affirmative Action (AA), as it applies to college admissions. For those of you who may have just beamed down from Jupiter, here is a definition of AA taken from no less a source than the Stanford Encyclopedia of Philosophy: “Affirmative action" means positive steps taken to increase the representation of women and minorities in areas of employment, education, and business from which they have been historically excluded. When those steps involve preferential selection—selection on the basis of race, gender, or ethnicity—affirmative action generates intense controversy.

I can vouch for that "generates intense controversy" part. All you have to do is search the College Confidential discussion forum for the term "affirmative action" and you'll find a huge number of highly emotional comments from all sides of the AA argument. For example, here's one thread that has over 600 comments regarding race in college admissions. There are many others. The bottom line seems to be that many (most?) people feel that gaining an advantage in the highly competitive world of college admissions (especially in so-called "elite" admissions) due to race, ethnicity, or gender is just not fair.

Apparently, Arizona voters in this week's mid-term elections had a chance to voice their opinion about AA when they "approved Proposition 107 banning the consideration of race, ethnicity or gender by units of state government, including public colleges and universities." Let's get the rest of the story from the San Fernando Sun:

. . . With 2,075 of 2,239 precincts reporting as of early Wednesday morning, the measure had just under 60 percent support in unofficial state results.

Arizona joins California, Michigan, Nebraska and Washington State in imposing such bans. Only Colorado rejected a similar ban in a statewide vote. In the states of California and Michigan, the bans led to sharp drops in the admission and enrollment of black and Latino students at flagship universities, although those institutions have made progress since the initial votes in diversifying their student bodies through race-neutral methods. In those states, however, undergraduate admission to the state universities is highly competitive.

In Arizona, a populist approach to admissions means that all students who meet certain criteria are admitted – without consideration of race or ethnicity. As a result, university officials have said that undergraduate enrollments should not be affected. However, Arizona's universities – like most institutions – have many programs for minority students, some of which could be challenged. Just last August, for example, Arizona State University announced new summer fellowships in digital media for minority students.

Arizona law prohibits public college and university leaders from urging voters to take one position or another on a referendum. So individual colleges and universities and the Board of Regents took no official stand on the measure.

The University of Arizona, however, posted a video on the potential impacts, as discussed by Jeff Milem, associate dean of the College of Education. He said that "the most profound impact" would be on graduate and professional education, where many programs do consider race or gender in admissions decisions. He said that in fields where there are clear disparities – such as engineering, which has a large gender gap – many professors believe they should make extra efforts to diversify their classes.

Milem also said that many graduate departments have scholarships that have been provided to the university foundation with the goal of supporting minority graduate students. Currently, faculty members help select the scholarship winners, but "I don't think we'd be allowed to be involved" after Prop 107 takes effect, he said. And that's a shame, he added, as "we are in the best position" to judge who should get the scholarships. He also noted that Arizona's graduate schools have had general diversity funds that they have used to attract talented minority students. Prop 107 "inhibits our ability to create a diverse learning environment," he said.

At a campus talk in September, Robert Shelton, the university's president, vowed to find new ways to recruit diverse students if Prop 107 passed. But in a sign of the periodically bitter debate over Prop 107, supporters of the ban on affirmative action issued a press release saying that if Shelton really believes in affirmative action, he should quit his job so a minority individual could take it.

Generally, critics of affirmative action have argued in Arizona that it is no longer needed. An editorial in The Arizona Republic endorsing Prop 107 said: "Affirmative action wasn't meant to be a perpetual- motion machine. The policy served an important purpose, making up for missing opportunities in education and the workplace. But over time, the drawbacks have come to outweigh the advantages. Voters should pull the plug."

To the extent that education leaders in Arizona have answered questions about Prop 107, prior to the vote, many seemed worried about the impact beyond admissions decisions. Roy Flores, chancellor of Pima Community College, said in an interview this week that there would be no impact on admissions practices, which are race-neutral. But he said that the college has a variety of outreach programs to recruit students and to help them succeed, and that some of these are "targeted" with a focus on particular groups. He said that these programs are designed based on the approaches that will engage members of different groups, not with any intent to exclude anyone. "I'm not sure what danger people see that they are trying to eliminate," Flores said.

Even if Pima and other colleges find ways to keep such programs, Flores said he was concerned about the message the state was sending. "I think there may be harmful effects."

As one College Confidential poster emphatically states in his/her opinion:

I honestly believe that one day in the future, society will look back on this era and regard affirmative action as a pathetic, sorrowful, and hypocritical attempt to reverse the wrongs of the past that only resulted in the loss of opportunities for many qualified individuals, who were rejected solely or partly based on their race. I can't wait until the day when equality of individuals will finally be realized.

That's a strong stand. What's yours?