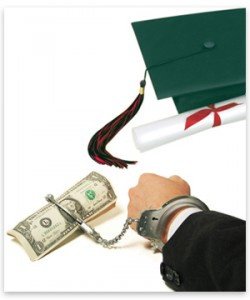 Feeling a bit overwhelmed with the Federal government becoming more and more intertwined in your daily life? If you're a college-bound student, or even a current student, you and your parents should be aware of the the latest Federal initiative: the elimination of private lenders from the student loan market.

I'm a big anti-fan of one of the most dreaded phrases ever heard: "Hello, I'm from the Government and I'm here to help." So, what's the deal here with this anticipated takeover of student loans? Here's a excellent overview from CNS News:

A bill currently before the Senate would empower the Obama administration to nationalize the student lending industry, eliminating the federally subsidized private loans millions of university students rely on to finance their educations.

According to the Department of Education, 14.3 million of the 17.5 million student loans were federally subsidized for the 2009-2010 fiscal year. Under Obama's plan, the government would consume the entirety of this industry – a total of $103 billion in 2009-2010.

Under the current system, the federal government subsidizes private financial institutions in order to entice those institutions to provide low-interest loans to students.

The government also agrees to reimburse the lenders should a student default.

Under the system proposed by Obama, the government would cut private lenders out of the picture entirely, setting the interest rates and collecting payments directly for all student lending.

Whether or not the government saw a profit or a loss from the new, federal loans would depend on the rate at which the government borrows money. For instance, the law currently sets the interest rate for direct loans at a maximum of 6.8 percent.

Under Obama's proposal, if the government can borrow money at a rate lower than 6.8 percent, it would realize the difference as profit. If the government's borrowing rate were to fall in the future, its profit on student loans would grow.

The idea to nationalize student lending was first put forth in President Obama's fiscal-year 2010 budget and marketed as a way to save the government billions of dollars. According to a CBO estimate, the proposal would save the government $87 billion over 10 years.

The savings estimate results from the fact that the government believes it will collect more in interest payments from students than it would otherwise have to pay in fees to lenders.

The plan has met Republican opposition, passing the House on a party-line vote in September – 253-171 – and has stalled in the Senate, where HELP Chairman Sen. Tom Harkin (D-Iowa) has said he plans to pass the measure using budget reconciliation.

“We've already been instructed by the Budget Committee to do this, so we're going to do it," Harkin told The Hill Oct. 19 when asked about using the controversial budget maneuver. Reconciliation allows budget-related items to be passed with a 51-vote majority, eliminating the threat of a filibuster.

The government's savings estimates have also come into question. In a July 27 letter to Sen. Judd Gregg (R-N.H.), the Congressional Budget Office admitted that its original figure of $87 billion in savings over 10 years did not include an estimate of losses the government would incur from defaults. When that risk was added in, the estimated savings dropped to $47 billion.

The original estimate “does not include the cost to the government stemming from the risk that cash flows may be less than the amount projected (that is, that defaults could be higher than projected).

CBO found that after accounting for the cost of such risk, as discussed below, the proposal to replace new guaranteed [subsidized] loans with direct loans would lead to estimated savings of about $47 billion over the 2010-2019 period," CBO reported.

As with many Web news stories, this one has a forum for reader comments. Do yourself a favor and check out the ones on this story. I think you'll quickly sense which way the winds of public sentiment are blowing.