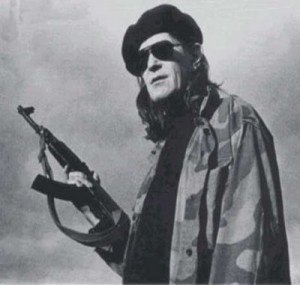 In one of my earlier posts, I wrote about some of the things I didn't like about college:

Elitist, leftist professors. Anti-war sentiment was strong in the late '60s and early '70s, stronger than it is today, in my opinion. The tinge of anti-Americanism was there, too, but perhaps not as strong as it is now. This affected me directly due to my military service. When I would try to advocate a pro-America, pro-military point of view, some of my professors (and even TAs) would brand me as a redneck, jingoist killer of innocent women and children or some variation thereof. Although I can't prove it, I honestly believe that their attitudes negatively affected my grades in some courses. The situation is far worse today, unfortunately.

Apparently, I'm not the only one who feels this way:

The University of Toledo's College Republicans are compiling a list of liberal professors who they claimed have a bias against conservative students.

Some highlights from this interesting story:

The list will include professors who students say have let their political views interfere with the way they interact with students in the classroom.

UT College Republicans President Matt Rubin, a junior majoring in political science and public administration, said the list is not an attempt to bash professors who have liberal ideas, but instead, it is an attempt to speak out for students who may have been victims of the bias, which was then reflected in their grade.

"We've been portrayed in the media, as well as comments from people in the community including College Democrats, saying that we're creating a blacklist in order to smear the names of professors and that's not true," Rubin said. "We're giving a voice to the students that have been harassed because of their political beliefs. It's the same thing as bashing a student because they're gay."

Rubin said the list of liberal professors is important because of the many complaints he received from students at UT College Republicans meetings, concerning professors who made unnecessary political comments, including anti-Bush statements.

"At our weekly meeting, something we like to do is take time out for students to tell stories of any bias they have had in classes. What we're doing is representing students who have had that experience. We're trying to expose professors who have liberal bias and go against everything UT stands for," Rubin said. "How is saying 'President Bush is the dumbest president this country has ever had and should be hanged' improving the human condition?"

The students who submitted and reported incidents such as these will remain anonymous, Rubin said.

"We had a student who said, in an ancient Greece class, Professor William O'Neal claimed that America did not liberate Europe in World War II. However; it was freed by Charles De Gaulle and the free French, not U.S. Soldiers," Rubin said.

O'Neal, chair and professor of history at UT denied ever making the comment.

UT has an abundance of resources available to students to help them if they experience this sort of bias, O'Neal said.

"If the student feels abused, they should talk to their professor. If that doesn't solve the problem, they should go to the department chair. If there is still a problem, they can even go to the dean or the Vice President [for] Student Affairs. There are so many places to go to avoid this type of thing," he said.

Rubin said, though the directory of liberal professors is of high importance to the UT College Republicans, they have done many other positive things that people should focus on.

"We like to consider ourselves a well-rounded group. We're not just a group of students sitting in a basement trying to slander these professors. We're really doing a lot more this year. We've been helping out with several local campaigns and we also are having a school supply drive for students at Scott High School," he said.

Rubin said the UT College Republicans are still working on compiling the directory of liberal professors, and expect it to be available on their Web site by Wednesday.

So, how do the libs feel about this? I had a good laugh reading the comments in the DemocraticUnderground.com discussion forum. For example:

- Shouldn't republicans then be protected under the people with disabilities act, or at the least the equal opportunity laws?

Should colleges maybe begin having special departments for their "special" students, where they are taught at a slower pace and perhaps in a way that doesn't crash down reality on them, but serves up a bit of their dysfunctional myopic view of reality so as not to explode their brains?

- Clearly, today's version of republicanism is pathological. I have always assumed that crazy conservatism, like hyper-religiosity, is a mental illness that afflicts less-intelligent people with an authoritarian nature. Could there instead be an actual physical difference in their brains? Perhaps they are more like an inferior species than mere defective humans.

- conservatives tend to spend much of their energy devoted to terror management - that is, doing things to alleviate fears, and for the conservative, fear comes from ambiguity, lack of closure, newness, difference, duality in thinking (stuff like, "some people prefer pie, some prefer cake, and that doesn't mean that either one is inherently better than the other"), people who think/act differently (xenophobia and homophobia fit in here), and so on.

- Obviously, they are there to provide a cover for four years of binge drinking and casual sexuality broken by occasional trips for Spring Break before the children of the entitled class go to work at the jobs awaiting them.

- In their world anyone not spouting Bible-thumping fascist corporatism is an enemy. Apparently anyone who doesn't buy the RW propaganda isn't to be tolerated and certainly not holding down a job as an academic.

And so on and so forth. Hey, why can't we all just get along? Huh? Really.