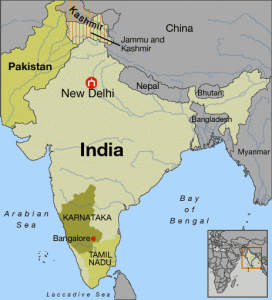 I remember my first semester of freshman English in college. I thought I was a decent writer, since I had received a lot of encouragement from my high school English (and other) teachers, so I looked forward to that first paper on D.H. Lawrence's The Horse Dealer's Daughter. Imagine my shock when it came back and I saw that nasty old "C-" grade scrawled at the top, along with way too many (in my view) picky red-line comments. Welcome to the NFL.

The good news is that I made the necessary adjustments and survived frosh English quite well, as well as the rest of my collegiate writing assignments. Being able to visit my respective professors and discuss those style issues was a big help. After all, that's part of what tuition covers--the ability to learn face-to-face from a learned scholar. Right? Not so fast there, Sparky. There's a new trend afoot in those halls of ivy. I call it the Bangalore Bounce.

Some American college professors are shipping (electronically) their students' papers over to Bangalore, India for evaluation, comments, and grading. "Yeah, right," you may say. Don't believe me? Read on:

Some Papers Are Uploaded to Bangalore to Be Graded

By Audrey Williams June, The Chronicle of Higher Education [Excerpts]

Lori Whisenant knows that one way to improve the writing skills of undergraduates is to make them write more. But as each student in her course in business law and ethics at the University of Houston began to crank out—often awkwardly—nearly 5,000 words a semester, it became clear to her that what would really help them was consistent, detailed feedback.

Her seven teaching assistants, some of whom did not have much experience, couldn't deliver. Their workload was staggering: About 1,000 juniors and seniors enroll in the course each year. "Our graders were great," she says, "but they were not experts in providing feedback."

That shortcoming led Ms. Whisenant, director of business law and ethics studies at Houston, to a novel solution last fall. She outsourced assignment grading to a company whose employees are mostly in Asia.

Virtual-TA, a service of a company called EduMetry Inc., took over. The goal of the service is to relieve professors and teaching assistants of a traditional and sometimes tiresome task—and even, the company says, to do it better than TA's can.

The graders working for EduMetry, based in a Virginia suburb of Washington, are concentrated in India, Singapore, and Malaysia, along with some in the United States and elsewhere. They do their work online and communicate with professors via e-mail. The company advertises that its graders hold advanced degrees and can quickly turn around assignments with sophisticated commentary, because they are not juggling their own course work, too.

. . . Virtual-TA's tag line is "Your expert teaching assistants." These graders, also called assessors, have at least master's degrees, the company says, and must pass a writing test, since conveying their thoughts on assignments is an integral part of the job. The company declined to provide The Chronicle with names or degrees of assessors. Mr. Rajam says that the company's focus is on "the process, not the individual," and that professors and institutions have ample opportunity to test the assessors' performance during a trial period, "because the proof is in the pudding."

Assessors are trained in the use of rubrics, or systematic guidelines for evaluating student work, and before they are hired are given sample student assignments to see "how they perform on those," says Ravindra Singh Bangari, EduMetry's vice president of assessment services.

Mr. Bangari, who is based in Bangalore, India, oversees a group of assessors who work from their homes. He says his job is to see that the graders, many of them women with children who are eager to do part-time work, provide results that meet each client's standards and help students improve.

"Training goes on all the time," says Mr. Bangari, whose employees work mostly on assignments from business schools. "We are in constant communication with U.S. faculty." . . .

. . . At Houston, business majors are now exposed to Virtual-TA both as freshmen and as upperclassmen.

Steven P. Liparulo, associate director at the university's Writing Center, helped give Virtual-TA its entree when the center decided to stop grading writing samples from the nearly 2,000 students each year planning to major in business. The writing evaluation is used to determine if students need extra help. He saw Virtual-TA as a way for the center's tutors to concentrate on working one-on-one with students. "That's just a much better use of their time," he says.

"People need to get past thinking that grading must be done by the people who are teaching," says Mr. Rajam, who is director of assurance of learning at George Washington University's School of Business. "Sometimes people get so caught up in the mousetrap that they forget about the mouse." . . .

I was especially taken by the comment, "The company argues that professors freed from grading papers can spend more time teaching and doing research."

Spend more time doing research. Well, excuse me if I expect you, professor, to have some direct and personal input into my educational process, especially in light of the price of education at your agust institution! Geez.

Apparently, I'm not the only one who feels this way. Check the comments at the end of the Chronicle article, as well as those from the College Confidential discussion forum.

What do you think? Let me know (below).