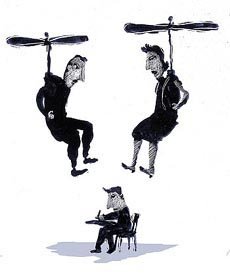 Back in the day, when I applied to college, my parents barely knew where I was applying. Neither of them went to college, so they weren't privy to even the Fred Flintstone methodology of college admissions in the mid-'60s (that's the 1960s, for all of you who think I'm older than dirt). It's not that they didn't care; they really did. It's just that they had no idea how to help me, other than to offer their ongoing love and moral support. I filled out a single, one-page application and didn't even have to write an essay. My entire college application process took maybe 20 minutes.

Things are a lot different today. Seniors are applying to 15, 20, even 30 colleges! Don't believe me? Check this out. The pressure to get into a good school, many times exacerbated by parental pressure, has escalated sharply over the past decade or so and shows no sign of abating. In fact (and this--finally--is the point of my post today), parental pressure and what I call "snoopervision" is at an all-time high. Thanks to a recent survey, we now have hard numbers to verify that statement.

A recent Kaplan test prep survey has documented the fact that parents are more involved than ever in their offsprings' college admission processes. (I've discussed this before here and here.) But, here's the latest scoop:

PARENTS MORE INVOLVED IN COLLEGE ADMISSIONS PROCESS, BUT SCHOOLS PHILOSOPHICALLY DIVIDED ABOUT HOW TO MANAGE THEM

77% Of College Admissions Officers Say Parental Involvement Is Increasing; Many Schools Involve Parents, While Others Seek To Cut The Umbilical Cord

A new Kaplan Test Prep and Admissions survey* of admissions officers at 387 of the nation's top colleges and universities reveals that the phenomenon of the helicopter parent - a term given to parents who "hover" over their children - may be more prevalent than ever, but that schools are divided on how to address it. 77% report that parental involvement in the college admissions process is increasing and because of this, 61% say that their school has been prompted to develop new initiatives for parents. But while a majority of schools are setting up special websites, seminars and tours just for parents, some schools are cutting parents out of the admissions process entirely.

"Parents are more involved because the college admissions process is extremely competitive and increasingly expensive. They want to make sure that they are helping their children make smart decisions and that they are making smart investments in their children's education," said Justin Serrano, president, pre-college programs, Kaplan Test Prep and Admissions. "These concerns may cause some parents to do a lot more than they have in the past or in many instances, a lot more than they should, from filling out applications for their children to calling the admissions offices with questions, to even writing their children's personal essays. Many schools are trying to remedy the situation in creative ways."

To address the growing role parents have in the college admissions process, many schools are now holding information sessions just for parents of interested students. Some schools reported holding two separate campus tours: one exclusively for students (no "embarrassing" questions from mom or dad allowed) and one for parents. Many have also added parent-specific sections to their web pages. Another said they have a "how not to hover" workshop for parents during campus visits. Other popular initiatives are Facebook pages, blogs and e-newsletters addressed specifically to parents. And some schools said that they now have an office dedicated to parent relations.

Other colleges are taking a different approach by cutting parents out of the picture as soon as possible.

* Just the Facts, Please: 67% told Kaplan that they have discovered claims on an application to be exaggerated or untrue.

* Can We Be Friends?: 80% report that they or a colleague in their admissions office had received a Facebook friend request from a prospective student - an increase from 71% in Kaplan's 2009 survey.

Parents, take a good look in the mirror. We know that you mean well, but are your hoverings causing undo stresses for your college-student-to-be? To paraphrase an old saying, too much hovering spoils the applications. Let your child be who s/he is (within reason). Add a touch of guidance here and there, but instead of becoming General Patton, try a gentle pat on the head now and then.