Articles / Admissions / Getting In Is Tough

Getting In Is Tough 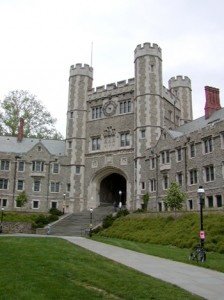 Some of you high school juniors (or even sophomores or freshmen) are no doubt targeting Ivy League and other so-called "elite" colleges and universities. If you are a regular reader of the comments of the College Confidential discussion forum, you have to be aware of just how difficult the challenge of getting into these schools can be.

One particularly pertinent example of just how steep the admissions slope is comes from Stanford University this year, where 93 0ut of 100 applicants were denied entrance to that esteemed institution of higher learning. Here's the background from Business Week's Janet Frankston Lorin.

The U.S. colleges that have been hard to get into are getting even harder.

Duke University offered admission this year to 3,972, or 15 percent of aspirants, down from 18 percent last year, after applications soared, according to Duke officials. Stanford University admitted 2,300 -- or 7.2 percent, the least ever -- said Shawn Abbott, admission director. The Massachusetts Institute of Technology saw its admittance drop below 10 percent for the first time, said Stuart Schmill, admissions dean.

Applications are surging because colleges are marketing themselves more vigorously, and the tougher they are to get into, the more students seek entry to multiple schools and increase competition for slots, said Jon Reider, director of college counseling at San Francisco University High School. The typical senior applies to a dozen colleges, 50 percent more than 10 years ago, Reider said.

“This is without any question the hardest year ever," Reider, who is also a former admissions officer for Stanford, near Palo Alto, California, said in an interview. “This is unprecedented. No question."

Seven of the eight members of the Ivy League, a group of four-year private colleges in the northeastern U.S., had an increase in applications, according to data from the institutions. The exception was Yale University, which had a decline of 134 applications, or less than a percent, from 26,003 last year, said Jeffrey Brenzel, admissions dean.

Put Up or Go Away

Colleges are beginning to notify high school students, by e-mail or through the U.S. Postal Service, of admission decisions. Most applicants who are offered places must pay deposits by May 1 to secure the spots.

“Students are looking at a wider range of schools because they are less certain of their chances of being admitted to colleges that typically would have been reasonable choices for them," said Christoph Guttentag, dean of undergraduate admissions at Duke, in Durham, North Carolina.

Applications to Duke rose 12 percent, and the university had to hire three part-time readers to help evaluate candidates, Guttentag said.

With a 42 percent increase in applications, the University of Chicago offered places to 3,560, or 18 percent, of 19,370 applicants, said Jeremy Manier, a spokesman. That compared with 27 percent last year. As recently as 1993, Chicago's acceptance rate was 77 percent, according to the university.

Chicago began a campaign in 2009 to increase applications by sending more mailings and targeted e-mails to prospective students who showed interest.

Dartmouth College in Hanover, New Hampshire, a member of the Ivy League, received 18,778 applications this year, about a 3.5 percent increase, said Maria Laskaris, dean of admissions and financial aid. Dartmouth admitted 11.5 percent this year, down from 12.5 percent.

Northwestern University in Evanston, Illinois, accepted 23 percent of applicants, down from 27 percent last year, said Christopher Watson, dean of undergraduate admission. While applications increased 9 percent to 27,615, the university took about 500 fewer students because it overenrolled last year and wants a class of about 2,025, Watson said in an interview.

Applications from students in California rose 15 to 20 percent, Watson said. Northwestern stepped up recruiting on the West Coast and in the South and Southwest because the college- age population is expected to increase in those regions while declining in the Midwest, he said.

“If they're considering migration from their home state, we are certainly on their radar," Watson said.

The immediate question that arises, here on the eve of the infamous April 1 Ivy League "Common Reply" date, is: Why is it so hard to get in?

To help you understand the magnitude of the challenge, consider the scope of an Ivy League application. Here's an excerpt from my College Confidential article:

What that question in the above heading really means is: Have you ever seen the size of some of those elite-college applications? If you haven't, stand by for a reality check.

Even with the "help" of the Common Application, thanks to the insidious add-on work required by the innocently named application "supplements," the sheer magnitude of the undertaking is why you must adjust your thinking. When we Baby Boomers applied to college, we filled out a few pages of basic information about our schoolwork, activities, and maybe—just maybe—we jotted down a paragraph or two about why we wanted to apply to that particular school. We got a teacher or two to write a good word for the school secretary and we mailed out our transcript. We sent in our ten-dollar application fee and were off to the races. In fact, the process was so relatively simple that we (as in "I" and maybe "your parents") don't remember much, if anything, about it. To say that times have changed is a ridiculous understatement. Here's why:

The typical Ivy League application, complete with its instructions, bound-in return envelopes, mailing labels, "advice" from the admissions staff, and other related goodies, is about the size of the phone book for most cities with populations in the range of 35-50,000. Seriously, if you've not seen one of these beauties before, you'll think that Penn or Brown sent you a copy of their annual report instead of an application for admission. Once you recover from the sheer visual impact, you can start to attack the instructions.

"Which," you may be saying with a hearty sneer, "is why I prefer to apply online." Hey, now that's not a bad idea, if you're into computers and all that. No messy paperwork, huh? Well, I'm going to go on record here with my open, naked prejudice against electronic applications. Yeah, yeah, I've read all the admission folks' magnanimous statements about how they prefer electronic apps ("We encourage them!") and that everything ends up being scanned into the system anyhow. Well, fine and dandy.

However, I'm a survivor of three decades of marketing wars and, even in this day of dazzling digital dexterities, I still believe that the best way to strut your stuff is on the actual paper forms of the traditional application. After all, if these schools were really serious about electronic applications, they would stop printing the paper ones and make everyone apply by computer, right? I'm not going to get into a big thing here about which way to go with your application, but my experience in working with many successful elite-college applicants over the years has shown me that the paper route, so to speak, is the way to go . . . (continued here).

So, happy reading, happy applying, and happy dreaming. Put on your climbing gear, though. Mount Everest has nothing on elite admissions!