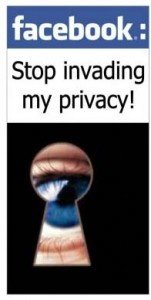 It's clear to me that many, if not most, high school students don't understand the limits of privacy online. My philosophy is: "Don't put anything online that you wouldn't want featured on American Idol."

A corollary to my online privacy mantra might also be "Don't put anything online that you wouldn't want the admissions offices of your candidate colleges to see." We've discussed this issue, in part, before, but there's mounting evidence that high school administrators (and hopefully parents) are starting to emphasize this seemingly obvious fact to their charges.

Attention Wellesley High School upperclassmen: you know that picture of you wearing that thing you were hoping nobody would ever see, doing that thing you hoped they'd never know you did? They just might have seen it.

As if the admission process wasn't stressful enough with the pressures of the SAT scores and arduous college applications, in an increasingly wired world, Wellesley students have to worry not only about how they present themselves in person and on paper, but also online.

In 2009, 16 percent of colleges researched applicants through search engines, and 17 percent researched them through social networks such as Facebook and Myspace, according to a study by the Center for Marketing Research at the University of Massachusetts-Dartmouth set to be released in the next few weeks.

While none of the colleges contacted for this article admitted to actively researching students online, a number of them said if made aware of a potential issue they might look into it via the Web.

“Any information that's in the public domain in whatever way we might be interested in depending on, frankly, how strong an interest we have in the candidate," said Marilyn McGrath, dean of Undergraduate Admissions at Harvard University. “We don't routinely sweep all of these sources … but anything out in the public a student should regard as available to the admission office."

It's unclear how often an applicant's online footprint leads to admissions denials, but there has been at least one confirmed case of it happening. In 2006, an applicant's admission to Reed College in Oregon was rescinded after he made disparaging remarks about his admissions officer in an online forum.

Doug Fodeman, a founder of ChildrenOnline, a company that looks at the impact of technology on children's development, recalled an instance where an admissions officer contacted a high school guidance counselor regarding an applicant.

“The short of it is a very good kid who had great grades did a dumb thing involving drinking, and somebody took a picture of her and tagged her in it," he said. “The admission officer tricked his way into her account, saw the picture that someone else posted, and denied her admission to the college."

“It's absolutely something that we bring up," said Beth Murphy, an admissions counselor at College Coach, a Watertown-based company that helps prepare applicants for the admissions process. “I'm not telling my students not to have an online presence — that's not realistic — but they certainly need to be aware that it's a public thing."

Murphy, a former admissions officer at the University of Pennsylvania, makes a point of telling those she coaches to tighten their Facebook privacy settings — which control who can access the profile — and to generally clean up their online presence.

“I suggest they remove anything that might be questionable," Murphy said. And if student has posted a potentially damaging profile picture, “I suggest that they change it to a more neutral photo."

“You've got to make sure photos of yourself that aren't too revealing are [on Facebook]," said Adam Nast, a senior at Wellesley High who plans on attending Ithaca College in the fall.

“I definitely censored some things," said Nast, who reviewed his profile as he got into the admissions process. “If there's a photo of me putting down a forty [slang for a 40-ounce bottle of beer], I'm going to put that away, you know what I mean?"

“I'm very conscious of what I put online," said Kam Desouza, a senior at Wellesley High School who plans on attending American University in the fall. “I constantly check [my profile]; even on an everyday basis I make sure I check what I've got up there and edit things."

It's common for students to engage in evasive tactics to hide their online activities such as untagging themselves from iffy photos, or digitally blurring parts of pictures that may be incriminating. But some students go further Desouza said.

“I know a lot of people who have erased their Facebook profiles and restarted it with a whole new e-mail address and nickname," she said.

But the majority of admissions officers contacted for this article believe the impact of Web-based research on the admission process is overblown.

“We don't do anything like that; we really feel that kids are entitled to a private life," said Karen Parker, director of admissions at Hampshire College. “We don't have the time or the interest in snooping on how students present themselves online."

If not for ethical reasons, some colleges said extensive online research of applicants was simply too difficult an undertaking for practical reasons.

“We get thousands of applications," said Jim Miller, director of admissions at the University of Wisconsin-Superior. “You can only spend so much time digging for something."

Miller, president-elect of the National Association for College Admissions Counseling, said he thinks colleges use the Internet to reactively verify claims made on applications, not as a proactive tool to probe an applicant's every facet.

But sometimes the colleges aren't the ones exposing the character flaws. Admissions officers said colleges sometimes receive letters, and more recently e-mails, impugning an applicant's character or linking to situations that might be reflect upon them negatively.

“You do occasionally get somebody who will try to let you know that the character of a certain applicant isn't what you think it is," said MJ Knoll-Finn, vice president of enrollment at Emerson College.

Faced with such information colleges were mixed on how they might respond.

“If a case showed up on our lap, I think we'd make a judgment call … which could be something that could cause us to reconsider our decision," said Grant Gosselin, dean of undergraduate admissions at Babson College. “It would depend on the severity of the incident."

Knoll-Finn said this type of situation “can be a jumping-off point," from which Emerson might follow up to get more information.

“If we did make a click through, which I can't say we wouldn't, we would then contact a guidance counselor," Knoll-Finn said. “If [applicants] are conducting themselves in an inappropriate way online and it shows something about their character and their judgment and it comes through to us then we will consider it."

For some students the online research is a little unsettling.

“It's kind of an invasion of students privacy," said Nora Rogers, a junior at Wellesley High School. “But also it's definitely something that colleges might want to know about the kind of people that they're accepting to their school."

Rogers has a rule she follows to help keep her profile clean.

But for other students, the possibility that admissions officers might be picking through their profile information is less than shocking.

“I've heard about it, so I'm not that surprised," said Dan Levy, a senior at Wellesley High School who plans on attending Syracuse University in the fall. “It was in the back of my head, but nothing that made me actually go out of my way to change anything."

“You've just got to look out for yourself really," Nast said. “If you get your application taken away it's your fault because you said something, or did something, the weight is on your shoulders."

The lesson here seems simple enough. If you're concerned about the small-detail aspects of your college applications, take an objective look at what you have posted about yourself online. Taking that approach one step further, try to find out what others have posted about you.

Search engines are notoriously effective and even though your own postings may be squeaky clean, your buddies may have compromised your cleanliness by posting that picture of you chugging a quart of Don Juan Sour Grape, complete with a colorful caption containing your search-engine-attracting name.

Think about it. To paraphrase Smokey the Bear, "Only you can prevent becoming an idiot." Or, "The admissions you save may be your own."