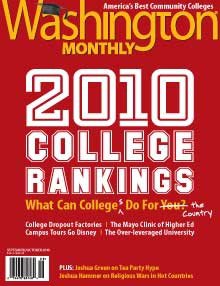 Maybe I should change the name of this blog to Rank This! Over the past weeks, I've been mentioning a few of the more prominent college rankings that have come out, as they always do this time of year. Well, what good would my first post-Labor Day post be without a mention of yet another rankings list? This time, we'll reference the Washington Monthly College Guide and Rankings, touted by the authors as "A different kind of college ranking." Okay, let's see about that.

Just what does "different" mean to these editors? Some excerpts from their rationale: "Calling attention to these service-oriented schools is one of the reasons this magazine got into the college-ranking business in the first place . . . But while there are plenty of guides out there that help students and parents decide how to spend their tuition dollars wisely, there wasn't one to tell citizens and policymakers which colleges were spending their tax dollars wisely . . . many colleges that are routinely buried in the lower reaches of the U.S. News rankings stand out on our list." Sounds refreshingly different, no?

10 College of William and Mary (VA)

The rest of the list, the TOP-100, has caused some ire in the halls of ivy. Here's part of a report from USAToday:

The Washington Monthly has yet again irked some educators, as it did three years ago, by ranking what it calls "America's Best Community Colleges" using openly available student engagement survey data.

Using benchmarking data from the Community College Survey of Student Engagement (CCSSE) and four-year federal graduation rates in an equation of its own making, the magazine attempts to rank the top 50 community colleges in the country in its latest issue. Though the periodical's editors say they only hope to highlight "what works and what doesn't" at these institutions by ranking them, CCSSE officials have denounced the use of their data in this way and argue it may do more harm than good.

"Community colleges are often underrecognized," said Kevin Carey, author of the magazine's community college rankings and policy director at Washington-based think tank Education Sector. "But there's been a lot of attention paid to them, thanks to the president's recent effort [with the American Graduation Initiative]. Since he supports investing and improving community colleges, we felt like it was a good time to ask, 'What do good community colleges look like?' If we're going to spend a lot of money, let's see what reflects best practices out there."

The Chronicle of Higher Education chimes in, too:

The University of California at San Diego was the nation's No. 1 university, and Morehouse College was the top liberal-arts college, in Washington Monthly's new guide, published Monday, which aims to counter U.S. News & World Report's college rankings. Washington Monthly ranks colleges based on measures of how much social mobility, research, and community service they foster. For the second time, the magazine also ranked community colleges, based on graduation rates and their performance on the Community College Survey of Student Engagement. Saint Paul College, in Minnesota, topped that list. As with all rankings, people have taken issue with Washington Monthly's methodology in the past.

Washington Monthly, a magazine with unusually robust higher education coverage, today released its own attempt at a ranking of colleges and universities.

The magazine is a relatively new entrant to the rankings field, which has become very crowded in recent years.

The trick is to offer something different than U.S. News & World Report, whose rankings stress reputation, graduation rates, test scores and other measures that produce a fairly predictable list of well-endowed and prestigious universities. At its genesis in the 1980s, a simple formula that yielded a ranking with Harvard, Princeton and Yale at the top made all the sense in the world, a gratifying affirmation of common wisdom. Three decades later, the approach is a magnet for criticism: the rankings are seen by some as telling college customers something they already know.

Washington Monthly rates and ranks colleges "based on their contribution to the public good," and in three categories: "Social Mobility (recruiting and graduating low-income students), Research (producing cutting-edge scholarship and PhDs), and Service (encouraging students to give something back to their country)."

(Whether those criteria ought to be the basis for choosing a college is a topic for another day.) . . .

I rather like the candidness of Washington Monthly. It's no wonder their rankings "irk" some in the halls of ivy. If you want to follow the pulse of higher education happenings, a pulse that you probably won't find in most other national publications, check out WM's blog site. Here's an example of the "candidness" you'll find there:

The Worst Trustees in America

In a depressing update to the story of Quincy College, the Massachusetts community college with a board of trustees so incompetent it couldn't hire a president, the school still doesn't have leader.

The board (at Quincy it's called the Board of Governors) briefly got it together long enough to hire an administrator but it looks like the deal fell through. According to an article by Jack Encarnacao in the Patriot Ledger:

A veteran college administrator who won a close vote in June to become Quincy College's next president is walking away from the job after infighting within the governing board stalled progress on a contract offer.

Philip Conroy, a Quincy native and vice president for enrollment management and marketing at Mount Ida College in Newton, informed the college board of his decision in a letter Monday.

In his letter Conroy explained that while he'd been offered the job back in June the board apparently still hadn't given him a contract. Conroy's apparently planning to stay at Mt. Ida.

It looks like that Quincy board is going to have to find new president, again. [Image via]

In my dim view, I think the proliferation of college rankings is due mainly to the growing consumerist mindset of the increasingly informed--and cynical--public. How can one not be cynical when we see the cost of higher education skyrocketing well beyond the other cost-of-living benchmarks? It's time for some accountability and it looks like Washington Monthly's push in that direction is causing some ripples in the far-too-long calm pond of American colleges and universities.