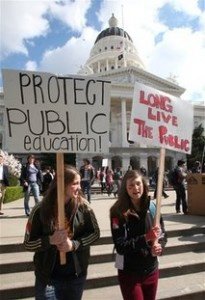 The economic downturn (some say "crisis") has finally come to land on public education at all levels. My post today, however, will deal with higher education, mainly state universities across the nation.

What were once "reasonable" costs for state universities are now going to rise dramatically due to states cutting support due to massive budget shortfalls. Students (and parents) are angry and protests are spreading nationwide.

Here are some excerpts from wire stories that sample some of the issues and what protesters are doing:

At least 15 protesters were detained by University of Wisconsin-Milwaukee police after as many as 150 students gathered at the student union then moved to an administrative building to deliver petitions to the school chancellor.

University spokesman Tom Luljak said campus police allowed one person inside, But when she emerged, she encouraged everyone to rush the building, he said.

The violence began when police tried to turn them away. No serious injuries were reported.

The school was among dozens of nationwide campuses hit with marches, strikes, teach-ins and walkouts in what was being billed as the March 4th National Day of Action for Public Education.

In Northern California, rowdy protesters blocked major gates at two universities and smashed the windows of a car.

Protesters at the University of California, Santa Cruz surrounded the car while its uninjured driver was inside. Earlier, demonstrators blocked campus gates.

University provost David Kliger said there were reports of protesters carrying clubs and knives, but Santa Cruz police Capt. Steve Clark could not confirm those reports. No arrests had been made.

An advisory posted on the school Web site urged people to avoid the campus because of safety concerns.

At the University of California, Berkeley, a small group of protesters formed a human chain blocking a main gate to the campus. Later in the day, hundreds gathered for a peaceful rally.

"We're one of the largest economies in the world, and we can't fund the basics," said Mike Scullin, 29, a graduate student in education who plans to become a high school teacher. "We're throwing away a generation of students by defunding education."

Organizers said hundreds of thousands of students, teachers and parents were expected to participate in the nationwide demonstrations.

Some university officials said they supported the protests as long as they remained peaceful.

"My heart and my support are with everybody and anybody who wants to stand up for public education," University of California President Mark YudofPublic education drives a society's ability to progress and to prosper." said in a statement. "

The steep economic downturn has forced states to slash funding to K-12 schools, community colleges and universities to cope with plummeting tax revenue.

Experts said schools and colleges could face more severe financial trouble over the next few years as they drain federal stimulus money that temporarily prevented widespread layoffs and classroom cuts.

In Wisconsin, more than 25,000 students have been put on a waiting list after the state's premier financial aid program ran out of money because of increased demand.

At the University of Illinois, about 200 professors, instructors and graduate faculty marched through campus carrying signs that read "Defend Public Education" and "Furlough Legislators" — a reference to recent furloughs and 4 percent pay cuts imposed on thousands of university employees.

The state is $487 million behind on payments to the University of Illinois, while state government has a budget deficit of $13 billion.

At the University of Texas at Austin, about 100 students and staff rallied on campus to protest a 5.4 percent hike in tuition and fees approved by regents a day earlier. Protesters complained the quality of education was taking a backseat to the university's bottom line.

Officials said the tuition hikes, which include another 3.89 percent jump for the fall of 2011, are necessary to avoid cuts in the face of declining endowment payouts and an anticipated cut in state aid.

In Alabama, Broderick Thomas, a 23-year-old Auburn senior, attended an annual higher education rally in Montgomery and said he feels "it's the moral duty of the state to give back what they promised."

However, the chairman of the state Senate education budget committee, Sen. Hank Sanders, D-Selma, curbed the enthusiasm, saying it would be hard to find additional funds for higher education this year.

"I wish we could give all the money higher education needs," Sanders said, as some in the crowd groaned. "We're having to cut up to $460 million out of the budget the governor recommended."

Students, teachers, parents and school employees from across CaliforniaSacramento for a midday rally at the Capitol to urge lawmakers to restore funding to public schools. gathered in

"Their tuition has taken a big chunk of my paycheck and my paycheck is shrinking, so it's a double whammy," Wall said.

A national day of protests against education funding cuts began Thursday with generally peaceful rallies, walkouts and teach-ins at universities and high schools. But an incident in which demonstrators smashed the windshield of a car trying to enter UC Santa Cruz brought a warning against any other violence.

At Cal State Dominguez Hills in the Carson area, about 50 students gathered in front of the student union with some shouting "Give My Education Back!" and carrying signs that proclaimed: "From Pre-K to Ph.D., Let Me Go to School." They played a mock “Wheel of Fortune" game with stops that included "graduating in four years with a good education" and "getting a 30% fee increase."

One of the organizers, Kevin Orantes, 23, a junior majoring in public administration and communications, said he became involved because he was upset about the effects of budget cuts on access to education and wanted to leave a better legacy for his own children. "Today's generation is reaping the benefits of sacrifice that generations before had to accomplish, like civil rights and women's rights," Orantes said. "If we don't do anything for the next generation, it will all be in vain."

Chris Morales, 22, a junior majoring in business, said it felt good to be part of a large protest effort, with rallies around the state and nation. "I feel like this is a big movement that might make a difference," he said.

There were reports of some trouble in Northern California as demonstrators decried higher student fees, reduced course offerings and faculty layoffs.

At UC Santa Cruz, more than 200 protesters blocked the two main campus entrances and reportedly smashed a car windshield with a metal pipe, officials said. There was no report of injury to the driver and no arrests were made, although police are investigating the matter. All UC Santa Cruz employees were told not to attempt to drive to campus for the rest of the day.

Campus Provost David Kliger denounced the incident. "Behavior that degrades into violence, personal intimidation and disrespect for the rights of others is reprehensible, and does nothing to aid efforts to restore funding to the university," he said in a statement posted on the campus website.

UC's top administrator also urged a day of nonviolence. "My heart and my support are with everybody and anybody who wants to stand up for public education. I salute those who are making themselves heard today in a peaceful manner on behalf of a great cause," UC system President Mark G. Yudof said in a prepared statement.

At UC Berkeley, about 150 protesters – at times chanting "Money for jobs and education, not for war and incarceration" – blocked the main pedestrian entrance to campus, Sather Gate, and also sought to stop people from walking into the university by hanging "danger" tape across paths.

A large crowd was gathering at UCLA's Bruin Plaza. Hundreds of students, faculty and staff members chanted, "Who's got the power? We've got the power!" as others walked out of classes for the protest.

Professor Sara Melzer joined her UCLA students in the 11:30 a.m. walkout from their French culture and writing course because she said she wants to stop what she described as the privatization of public higher education. "It's not just about student fee hikes," she said. "That's the tip of the iceberg."

Roselyn Valdez, 28, an anthropology graduate student at Cal State Northridge, participated in the UCLA demonstration and held a white sign that showed a skeleton writing the words "RIP UC." She said it stood for the demise of the public education system that helped her study at Los Angeles City College, UC Santa Barbara and now at Cal State Northridge.

Valdez said she used loans, scholarships and worked various jobs to pay her education costs. "With fee hikes, I can't imagine anyone else having the chance that I did," she said.

The rallies, organized by unions and student groups, are scheduled throughout California, and around the nation in what organizers describe as a "Day of Action." Events are planned in, among other spots, Sacramento, Long Beach and San Diego, as well as in New York City, Boston, Baton Rouge, and Seattle.

Authorities are warning of possible traffic delays Thursday afternoon in Westwood and downtown Los Angeles because of the protests . . .

What will these protests accomplish? It's anyone's guess. However, the simple fact of the matter is that states no longer have the funds to do business as usual. What's the situation in your state?