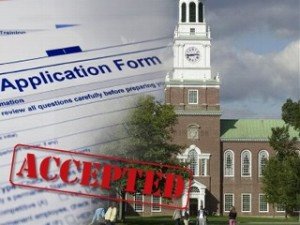 I've always maintained that colleges hold most of the cards in the admissions poker game. If you're a high school senior applying to a so-called "elite," "top-tier," or plain old "prestigious" school, then be prepared to enter a Wal-Mart Super Center-sized seller's market. You badly want what these colleges are selling, and they know it. Thus, they have interesting ways to persuade you to commit to enrolling. That is, if you're good enough.

The National Association for College Admission Counseling (NACAC) has released a report documenting one of the most common of these enrollment "incentives": Early Decision (ED). For those of you who don't know what ED is (no, I'm not talking about the reason we see so many Viagra and Cialis ads on TV and in our email inboxes), I'll explain. Early Decision is a college application option whereby high school seniors complete their application process and submit all the appropriate paperwork by early-to-mid-November. Then, an admission decision is delivered in December, before Christmas, but usually earlier in that month. If the decision is "accepted," then the applicant is committed to enroll (they have signed a document stating that they will enroll if accepted). There are other possible outcomes: Deferred (a final decision on acceptance will be issued in the spring) or Denied ("sorry, you're history here"). For those deferred, there's yet another possible outcome in the spring: the wait list ("maybe we'll let you in, but, then again, maybe not"). Wait lists are collegiate purgatory, but that's a topic for another post.

There's also a non-binding version of ED: Early Action. Same basic deal, but there's no signed commitment to enroll. ED, though, is what we're talking about here. Let's have a look at what NACAC is talking about, thanks to the staff of CityTownInfo.com.

The National Association for College Admission Counseling released its 2010 State of College Admission report, which revealed some interesting new trends in student and college behavior during the 2009 admissions cycle. One change may be particularly helpful for some of the most competitive students: more colleges are accepting a greater number of early decision applicants.

Early decision seems to be gaining popularity, but some argued that the process favors wealthier students as applicants must commit to enroll if they are admitted. Because of this requirement, critics say only students who can afford to commit to a college without comparing all financial aid offers benefit from early decision. According to The New York Times, however, colleges say acceptance rates are higher because the quality of early decision applicants is also higher.

The Chronicle of Higher Education stated that the report also found other trends. For instance, while the number of high school graduates reached a peak of 3.33 million in 2009, 29 percent of colleges reported receiving fewer applications, the largest proportion since 1996.

The authors speculated that the decline was due to the recession. Cost considerations have recently become a priority to students and more are considering affordable choices such as two-year colleges or public colleges rather than private ones.

Perhaps the most useful piece of information for applicants is the rise of an additional criteria. While the usual factors remain important--grades and overall GPA, strength of high school curriculum and admissions test scores--more schools are now looking at "demonstrated interest in enrolling". In 2003, just seven percent of colleges considered interest in enrolling "considerably important". In recent years, however, approximately 21 percent of colleges have given it more weight in the decision process. Many colleges believe that demonstrated interest, such as campus visits and contact with admissions offices, is an indication that students are more likely to enroll.

As you may be able to infer from that article, ED allows a college to stack their deck with more students who may not only be able to pay more freight (thus requiring less financial aid) but also be a prized enrollee taken away from competing institutions. This can help a college rise in the those rankings I dislike so much, due to snagging applicants with higher overall test scores and class ranks.

The good news about ED is that it allows deserving applicants a chance to get into there clear first-choice schools by mid-December. This takes off a lot of pressure during the remainder of senior year. However, the bad news is that for many needy applicants, it limits (literally eliminates) the possibility of comparing financial aid offers from other schools, since they have to withdraw any other applications.

"Ah, but applicants don't have guns pointed at their heads making them apply ED?" you say. Look at the report data, though. If you're a high-flying high school senior who wants to go to a top school, where do your best chances lie? Huh? Duh.

It's no wonder, then, why colleges are loading up their incoming classes with EDers. I'd love to see a debate between some brilliant consumer advocate and these admissions types who are scarfing the majority of their freshman classes through ED. I'd love to hear them defend the statistics reported by NACAC here. I doubt that a debate will ever happen, though, because of the massive seller's market that exists now. Why rock a boat that's floating just fine?

Bottom line for high school seniors: Think long and hard about applying ED. Are you ready to sign on the line which is dotted? Better read that NACAC report again.