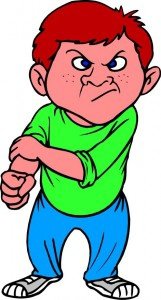 Parents, were you ever bullied when you were in high school (or even at an earlier age)? The problem has become a national issue of significant proportions (I hesitate to use the word "epidemic"). One recent tragedy happened when a 15-year-old Massachusetts high school girl committed suicide after being relentlessly bullied by nine of her classmates. Bullying may be happening to your child and you may be unaware of it. So, how can you tell if that's happening in your family? Watch E! tonight.

Here is some background on the E! program from their press release:

Every day, thousands of kids across the country are afraid to go to school thanks to an epidemic of vicious behavior among American teenagers. It is estimated that 20% of children are victims of bullying. These attacks come in the form of physical and verbal abuse, as well as by newer methods of harassment using cell phones and the internet. Once thought to be just harmless teasing, the real-life effects of bullying can include prolonged depression and even suicide. Recently, according to police, a 15-year-old girl in Massachusetts hung herself after being taunted by a group of girls who posted mocking messages on their Facebook pages. This one-hour episode sheds light on several recent stories and the tragic effects that can result from this all-too-common behavior when E! Investigates: Bullying airs April 21 at 10:00 PM ET/PT, only on E!.

By all accounts, Dylan Theno was a happy, well-adjusted boy in a small Kansas community. But when he entered 7th grade, a few of Dylan's fellow students began making fun of him. For years the cruel taunts and name-calling continued. The Thenos claim they spoke with school officials on numerous occasions to no avail and they ultimately had to make the tough decision to pull Dylan from the classroom. Also in this episode, E! Investigates interviews students, parents and faculty in Calabasas, CA, to learn what really happened when red-haired kids were suddenly singled out and attacked on the infamous “Kick A Ginger Day." E! Investigates: Bullying explores theories of what may be causing the increasingly cruel nature of these attacks, explains how the advent of hand-held technology has given bullies powerful new weapons, and shows what schools are and aren't doing to prevent bullying. Finally, warning signs are identified that parents should look for if they suspect their child has become a bullying victim.

If you're shocked by what you see on this program, or by what you may have read about the Massachusetts case cited above, learn more about bullying. You'll be glad that you did.