Articles / Admissions / Do You Measure Up?

Do You Measure Up? 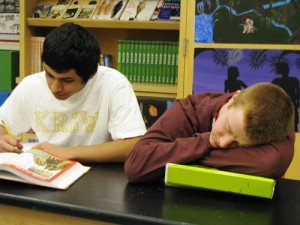 I thought I was well prepared for college. My children were well prepared too. However, that's not the case for many high schoolers who will enter college classrooms this fall. If such statistics were available, it would be helpful to know what percentage of your high school's graduates go on to four-year colleges every year, plus what percentage of them remain in college through graduation. The attrition rate is a good benchmark for how well your high school prepares its students to survive the rigors of higher education.

There's new information about this topic that should be disturbing, not only to aspiring collegians but also for public school administrators and their boards. As a new report disturbingly shows, "It has been the dirty little secret of higher education for decades: Tens of thousands of college students can't do the work." What's going on here?

Here are the details, as reported by Chron.com's Jennie Kevar:

Many in college lack basic skills

It has been the dirty little secret of higher education for decades: Tens of thousands of college students can't do the work.

Developmental education — reteaching basic skills in reading, writing and math — is a $200 million-a-year problem in Texas, funded by taxpayers, colleges and the students themselves. Private groups also spend millions of dollars on the issue.

But relatively few students who need the classes go on to earn a degree, raising questions about whether money spent on developmental education is a wise investment.

“It's all about efficiency," said Jim Pinkard, a program director at the Texas Higher Education Coordinating Board. “What are we sending all these kids to college for?"

“It's a matter of finances, and it's a matter of work force development," said Donetta Goodall, vice chancellor of academic affairs and student success at Lone Star College, which serves suburban Houston and where about two-thirds of students require at least one remedial course.

“Funds are limited everywhere," she said. “If we have people who can go straight through college, who we don't have to spend additional money on remediating them, that helps the work force but it also helps the coffers at the state level."

All public colleges offer developmental classes, but about 90 percent of the work in Texas is done at community colleges, which educate 57 percent of the state's college students.

Well over half of community college students are unprepared for college classes — the number approaches 70 percent at Houston Community College — with low-income students more likely to need the additional help than their wealthier peers.

Now community colleges have been told to do a better job with those students, prodded by private foundations and lawmakers weary of excuses.

Not ready for the work

There are lots of reasons students aren't ready for college.

Some have been out of school for years and their skills have grown rusty. Others dropped out of high school, enrolling at a community college after earning a GED diploma without ever completing a higher-level academic program.

And despite efforts to impose a more rigorous high school curriculum — including new standards requiring all students to take four years of math and science — not everyone who graduates from a Texas high school is ready for college.

“I have students tell me that in high school, they would study 10 minutes before the test is given," said Paulette Heidbreder, chairwoman of the guided studies department at HCC's Northeast College, who teaches remedial reading classes. “They think we're going to pass them just for being here."

So there they are, enrolled in college in the midst of a push from legislators, business leaders and others to produce more college graduates.

It won't happen unless more students survive the required remedial classes and go on to graduate. But many give up after a year or more of playing catch-up.

“If we don't fix developmental education, the chances that low-income students will achieve higher education are very low," said Diane Troyer, senior program officer for the Bill and Melinda Gates Foundation, which has invested nearly $5 billion to double college graduation rates among low-income students by 2025.

In Texas, the pressure is heightened by a projected $18 billion budget deficit and a growing population of low-income Latinos, historically the group least likely to earn a college degree.

“It's a huge issue," said state Rep. Dan Branch, R-Dallas, chairman of the House Higher Education Committee. “It's an inefficiency in our education system that is and will be even more costly for a state like Texas, which has to have an educated work force."

Not so long ago, the goal was to get more people enrolled in college.

Now, the buzzword is “completion," making sure they actually graduate or earn a certificate.

Developmental education is one of the biggest stumbling blocks. Fewer than 10 percent of students who require more than a few remedial classes even make it to college-level classes, Troyer said.

“I don't think it's logical to say you're going to get rid of developmental education," said state Rep. Scott Hochberg, D-Houston, chairman of the House appropriations subcommittee on education. “The question is, how do you minimize the time and cost?"

The Legislature has agreed to change the way it pays for the courses, encouraging colleges to break away from traditional 16-week semesters and tailor learning to students' needs.

And beginning in 2011, Hochberg said community college graduation rates will be posted alongside state appropriations for each school, bringing new scrutiny to how well the colleges are doing.

Judged by graduation rates, that's not so well. The Higher Education Coordinating Board reports that 16 percent of community college students who enrolled in 2005 and did not require remedial courses had earned an associate degree three years later. Fewer than half as many who did need the additional work — 7.6 percent — graduated within three years.

Community colleges complain that graduation rates obscure the fact that many students work and attend part time, while others transfer to a four-year school, earn a certificate rather than a degree or never intended to earn a degree.

Hochberg acknowledged the concerns, noting that graduation rates will be just one piece of information for legislators to consider.

But clearly, community colleges are expected to do better.

The experts already know a lot about what works.

• • College readiness tests for high school students, allowing them to improve their skills before starting college.

The Gates Foundation grants include $110 million to spread successful programs across the country, including a $743,000 grant to help HCC extend its efforts.

The Gates Foundation grants include $110 million to spread successful programs across the country, including a $743,000 grant to help HCC extend its efforts.

But changing long-held practices can be difficult.

Semester-long classes often don't work in developmental education, said Charles Cook, vice chancellor for academic instruction at HCC. “They're too long. Life gets in the way."

Still, that's not the norm.

“The 16-week semester has been in existence well over 100 years," Cook said. “The whole infrastructure revolves around that, in terms of financial aid, faculty schedules, vacation times. It's been difficult getting people to be more flexible and experimental."

Cook said the work is starting to pay off, resulting in slightly higher retention rates.

He and Goodall, the Lone Star vice chancellor, expect the more rigorous high school curriculum will help in coming years, as well.

Branch, the House Higher Education Committee chairman, said legislators will look at ways to tie funding to results in the upcoming session.

Moving students through remedial education and toward a college degree is the ultimate goal, he said.

What do you think? Is your high school (and, in general, your school district) doing a sufficient job in getting its students ready for college? Check the stats on how well recent graduates are doing in the halls of ivy. If they're not doing well, it's time to remedy the root cause.