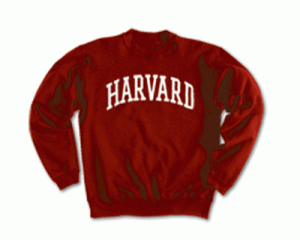 The world's thinking about managing yourself.

Yikes. Hope I don't get sued.

Protecting Harvard: Words to Sue By?

Is Harvard becoming the Nike of higher education?

The sneaker giant built a mega-successful brand in part by trademarking a common, three-word phrase that initially had no overt connection to athletic footware: "Just do it."

The most famous university in the world, meanwhile, is applying for trademark rights on phrases in which the tie-ins to Harvard are also less than obvious: "Managing yourself" and "The world's thinking." The university, as reported by the Boston Globe, already has registered trademarks for the phrases "Ask what you can do" -- from President Kennedy's 1961 inaugural address -- and "lessons learned" with the U.S. Patent Office. Why do I keep thinking of the word arrogance while reading this article?

A company's decision to pursue legal protections for a snappy catchphrase is nothing unusual. But for a university it's different, said Joe Dreitler, an Ohio-based trademark lawyer whose clients have included Budweiser and former Vice President Al Gore.

"This is a fairly aggressive postion for educational institutions who are not historically known for hardball competition in the marketplace," Dreitler said.

Experts say university trademarks are more common in the area of sports, with colleges staking their claims on team names, mascots and signature colors.

But some, including Dreitler, question whether a university should be trying to make the same claims on common terms in the English language.

"The idea of registering this as a trademark for education services for a university -- it does seem to be really close to the line as far as trying to take common terms in the English language and keep them from others using them to teach," he said.

Others argue that the trademarking of such slogans wouldn't actually limit education: Another university, for instance, could still use the phrase "The world's thinking" in a description in its course catalog -- it just couldn't necessarily use it in large type on the cover of the catalog, said Martin Schwimmer, a New York trademark lawyer, who represents Fortune 100 companies.

Rick Clixto, the director of Harvard's trademark office, told the Boston Globe that the university registers common phrases "for the same reason McDonald's registered [its slogan] 'I'm lovin' it.'"

Wouldn't you think that a school like Harvard, which has a world of applicants beating down its doors to get in, would have better things to do than spend money on such seemingly arbitrary marketing pursuits?

"Should you bother? To me it's really a business cost-benefit analysis question," he said.

Schwimmer and Dreitler both [trademark lawyers] said that if Harvard succeeds in its latest trademark applications, some might think twice before adopting "The world's thinking" and "Managing yourself" as their own slogans. But the law wouldn't necessarily bar other groups -- especially businesses that don't have any connection to educational services -- from using them.

"Trademark lawyers sometimes counsel people not to adopt these sort of trademarks," Schwimmer said, "because it's a can of worms."

Read the whole article for yourself and then enjoy some of the comments that follow, such as:

- "Ten or twenty applicants for every spot, and Harvard thinks it has to market itself? Why don't they apply some of that marketing money to scholarships or research?"

- "Trademarks are supposed to be for consumer protection. For instance, I can't begin marketing a soft drink called "coca-cola" or start a university named "Harvard" because people might mistake it for the original brand. "Managing yourself" is hardly a brand. Harvard should be ashamed of itself."