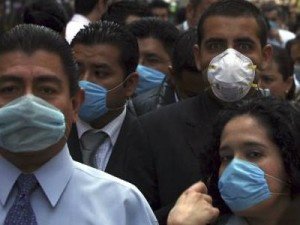 As a parent of two former college students, I can certainly identify with the concerns of today's parents about the so-called Swine Flu (H1N1 Flu). Due to the close proximity of students in dorms, with many shared facilities, the transmission of flu viruses, even in "normal" times can be a real hazard.

Now, however, with such a potentially (and confirmed deadly) strain on the loose, the landscape for concern has taken a stressful turn:

A student from Cornell University in Ithaca, N.Y., has died of complications from the H1N1 virus, according to a statement on its Web site.

"The university has been in close contact with Warren's family, and we wish to convey our heartfelt condolences to them and to his many friends," said Cornell President David Skorton, in a message to the university community. "Please keep them in your thoughts in the following days."

Skortin's statement urges students and others to take precautions to minimize the risk of infection and spread of the flu.

More than 500 students have come down with flu-like symptoms in recent week, university health officials said. The university, which enrolls about 20,000 students, has establishing a flu information Web page and hotline.

For you parents who may want to know the college flu situation nationwide, here's a map that may help, along with this explanation:

Google rocks. We already knew that. Now Google's expanding its flu tracking service to help Mexico figure out where swine flu outbreaks may pop up next. And the International Association of Emergency Managers' university committee is using Google to map cases of swine flu on college campuses. In addition to the four campuses I mentioned in the wee hours of this morning - the University of Delaware, SDSU, Long Beach and Notre Dame - the University of Chicago is looking at two sick medical center staffers, who had no patient contact, and Ohio State has one, also at its medical center, who may have caught the flu off campus.

Take a look. The map is both reassuring - so few tacks! - and somehow alarming - we need a map? - at the same time. Yellow thumbtacks indicate probable cases; the green (Notre Dame) means the student has already recovered. Here's hoping the tacks do not become any more colorful. A blue tack would mean new, suspected cases. Red confirms the diagnosis. And pink - the color of happiness, rosebuds and valentines? They picked that for fatalities.