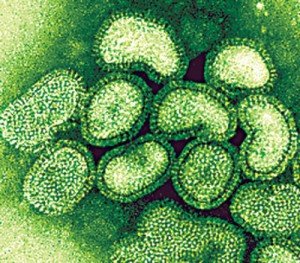 Now that students are back on campus, bringing in with them a wealth of germs from all over the world, the Swine Flu reports have started to roll in. First up: Emory University:

Emory moves students with swine flu into one dorm

Emory University has moved about 50 students with swine flu into a separate dorm, where they are not attending classes and school workers are delivering food to them, officials said.

“The idea is to keep them separate from the other students while they recover," Emory spokesman Ron Sauder said.

That dorm on the Druid Hills campus had been left open at the beginning of the school year.

Emory has about 6,900 undergraduate students and an additional 5,900 graduate students. Each of the sick students has his or her own room in the dorm, which has a capacity for 100 beds. The students are there on a voluntary basis, Sauder said.

Schools across metro Atlanta are taking precautions to prevent the spread of the swine flu, from making sure students wash their hands to sending prevention tips home to parents.

The University of Georgia's health center has been busy with students who are sick with swine flu, said Liz Rachun, UGA's health communications coordinator. The good news, though, is that the cases have been mild to moderate.

“There are a lot of sick kids on campus right now," she said.

Swine flu is widespread in Georgia. The state is no longer testing each case for novel H1N1, commonly called swine flu. The state tracks hospitalized cases and deaths.

Since swine flu emerged in the spring, four people have died from it and 147 have been hospitalized in Georgia as of Aug. 26, according to state health officials.

Swine flu vaccine is expected to be available in October, officials said.

President Barack Obama said Tuesday that while swine flu vaccine will be voluntary, the government will “strongly recommend" that people get it.

Next up: University of Kansas:

University of Kansas students isolated by the flu

Two students at the University of Kansas have contracted the swine flu (H1N1), and the college estimates 340 students have come down with flu-like symptoms.

Two 18-year-old girls have confirmed cases of the swine flu, prompting the school to isolate the girls in their shared dorm. Now, the school is offering flu kits and warning students who are experiencing flu-like symptoms to stay in their dorms and call for assistance.

In a message to the community, the university said; "otherwise healthy students experiencing flu-like symptoms - such as fever and a cough - to stay home and call for assistance instead of visiting the student health center in person."

"We still want the students to call us and talk to a nurse or doctor. But if they are generally healthy young adults, there is no need to come down physically to the center," Carol Seager, director of Student Health Services said in the statement. "The best thing they can do is isolate themselves at home until they are better and no longer infectious."

"Our hope is to beat the flu bug by hitting it hard early and not letting it spread without a fight," Seager added.

Here's the College of Charleston:

College of Charleston spokesman Mike Robertson confirms there are 12 cases of swine flu.

Robertson says students came to the health center with flu-like symptoms and testing confirmed H1N1. They were given medicine and masks to wear and told to rest and isolate themselves from other students.

Robertson says this is a concerning situation because usually students don't show up to campus with the flu until after Christmas break. The College sent emails to student about taking precautions and post information on there http://www.cofc.edu website.

DHEC says they have scaled back their testing for Swine Flu because of limited resources and the prediction that as many as half of Americans will contract the virus within the next year. That estimate comes from the President's Council of Advisers on Science and Technology.

Vaccinations for all Americans will be provided by the government starting in mid October and will be distributed in weekly “waves" starting with people who have compromised immune system conditions. Boosters will start around Christmas.

DHEC will only ask primary care physicians to request Swine Flu tests if there are clusters or outbreaks of the virus. For example if only 20 percent of the people where you work have flu normally, but 60 percent have it this year, that might constitute an outbreak or cluster according Dr. Robert Ball from DHEC's District 7.

People who are hospitalized for serious flu illness or have serious reason to believe they came in contact with Swine Flu will also be tested.

The following statements come from DHEC's website about tracking cases of the virus.

Instead of focusing on individual cases, we are now focusing our staff and resources to monitor:

Hospitalizations due to novel H1N1 flu

Changes in the severity of the virus.

Our approach follows guidance issued by both the Centers for Disease Control and Prevention and the World Health Organization on how public health authorities should continue to monitor and track the progress of novel H1N1 flu in a way that uses resources most appropriately to protect public health.

We will continue to update our influenza surveillance information regularly through our flu surveillance system, which also tracks seasonal flu.

We encourage you to continue taking these simple, but very important steps to protect yourself and others from various strains of the flu:

Wash your hands thoroughly and often.

Cover your cough with your sleeve, not your hand.

Stay home if you're sick.

Stay away from people who are sick.

Eat a healthy diet and get plenty of rest.

Parents, nag your kids about common sense health precautions: Don't drink from the same beer glass as others. No face-to-face contact above the chin. Cover your mouth when sneezing. No partying . . . Well, you gotta nag!