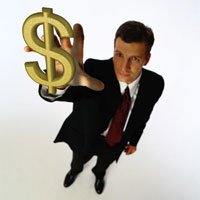 With all the shrieking about corporate executives' pay, along with that pay czar dude's pontifications, one has to wonder about the rationale for some of the compensation levels bestowed on college presidents. The new numbers are out and some of them are rather amazing.

The New York Times reports a rather amazing statistic.

Here are the details (with some very helpful links) from Tamar Lewin's article:

The presidents of the nation's major private research universities were paid a median compensation of $627,750 in the 2007-8 fiscal year — a 5.5 percent increase from the previous year — according to The Chronicle of Higher Education annual executive compensation survey.

The highest paid private university executive was Shirley Ann Jackson, president of Rensselaer Polytechnic Institute in Troy, N.Y., with a pay package totaling $1,598,247 in fiscal 2008. Ms. Jackson, a physicist and former chairwoman of the federal Nuclear Regulatory Commission, has been at Rensselaer since 1999, and first became the highest-paid university president just two years later.

In this year's survey, she was followed by David J. Sargent of Suffolk University in Boston, the top earner in last year's survey, who took in $1,496,593 in fiscal 2008, and Steadman Upham of the University of Tulsa, whose pay package was $1,485,275.

Over all, the Chronicle survey found, the median pay for presidents of the 419 private colleges and universities surveyed was $358,746, a 6.5 percent increase over the previous year. Over the last five years, the median presidential pay, adjusted for inflation, grew by 14 percent.

Why is university presidents' pay going up so much?

“I think the answer you'd get from the governing boards that set these salaries is that it's a market and it's increasingly hard to find these people," said Jeffrey Selingo, editor of The Chronicle of Higher Education, which has published its compensation survey annually since 1993. “That said, almost every year, presidential salaries have gone up faster than inflation, and faster than tuition, which rankles some people on campus."

The Chronicle's information is from federal tax documents for the 2007-8 fiscal year, the most recent data available, but from a period before the current economic downturn. More recently, most colleges have moderated, or frozen, salary increases.

“It's important to remember that these pay packages were set before the economic crisis began last fall," Mr. Selingo said. “Since then, many presidents have taken pay cuts, donated part of their pay in scholarships, or had their pay frozen. Next year, it's likely that we won't see many presidents getting big raises."

Mr. Selingo pointed out, however, that even if presidential pay has stopped growing so quickly, tuition has not, with 58 private colleges charging more than $50,000 for tuition, fees, room and board this year, compared with only five last year.

In its previous presidential pay surveys, The Chronicle reported compensation at both public and private universities, and last year, it was the public university presidents who were getting the larger raises.

In the current survey, covering only private institutions, for the presidents of large, complex research universities the pay increase was 11 percent over the year's inflation rate. Over the last five years, The Chronicle found, their median increase, adjusted for inflation, was 19.6 percent.

Presidents of small liberal arts colleges tend to be paid less, with only John A. Fry, the president of Franklin & Marshall College earning more than a $1 million in 2007-8.

While most of the highest-paying universities on The Chronicle's lists are well-known institutions, there are some surprising names as well.

Many of the pay packages in the survey included deferred compensation.

For the first time this year, The Chronicle survey analyzed the “former officer" pay reported on college's federal tax forms, and found that 85 of the institutions, about one in five, were paying at least one former officer or key employee more than $200,000 in compensation in 2007-8.

One of my favorite paragraphs is this one:

“I think the answer you'd get from the governing boards that set these salaries is that it's a market and it's increasingly hard to find these people," said Jeffrey Selingo, editor of The Chronicle of Higher Education, which has published its compensation survey annually since 1993. “That said, almost every year, presidential salaries have gone up faster than inflation, and faster than tuition, which rankles some people on campus."

In the words of the pre-teen who lives next door to me, "Ya think!?"