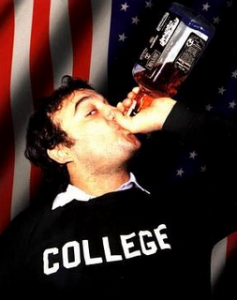 More sad news today about the consequences of college drinking. A 22-year-old man was found dead at the Pi Kappa Alpha fraternity house at Carnegie Mellon on Saturday afternoon, according to Pittsburgh police. The student attended Pitt's Greenburg campus, according to an article in the Pittsburgh Post-Gazette.

The Pitt News article goes on to say:

A 22-year-old man was found dead at the Pi Kappa Alpha fraternity house at Carnegie Mellon on Saturday afternoon, according to Pittsburgh police. The student attended Pitt's Greenburg campus, according to an article in the Pittsburgh Post-Gazette.

The man was apparently at the house on Morewood Avenue for a birthday celebration, the article said . His cause of death hasn't been determined, but city police detective Christine Williams told reporters the man and his friends "likely drank too much."

Foul play is not suspected, she said.

Crews responded to the fraternity house, which is located in the 1000 block of Morewood Avenue, at about 1 p.m, police said. An autopsy is scheduled for Monday morning.

Teresa Thomas, assistant vice president for media relations at CMU, confirmed the report Saturday night, adding that the student attended CMU from 2007 to 2008. She could not say whether the death was alcohol-related, and declined to release the student's name because his family had not yet been notified.

CMU is contacting his family and friends, Thomas said. The university will offer support to students from its Counseling and Psychological Services.

The issue of college drinking and what to do about it has risen to almost front-page importance. The College Confidential discussion forum has a large number of threads that thrash the issue. Here's just one example.

So, what's a parent to do? Well, Virginia Tech is taking an interesting approach. Here are some excerpts from an enlightening AP wire story:

This semester, the school in Blacksburg, Va., began notifying parents when their under-21 students are found guilty of even minor alcohol violations such as getting caught with a beer in a dorm room.

Although it's common for colleges to alert parents of major alcohol offenses — or when a student faces suspension — Virginia Tech is part of a small but growing number sending letters home on minor ones.

The debate about how much to involve parents in such cases is a balancing act for colleges and universities. Officials want to hold young adults accountable as they venture out on their own, are well aware that drinking is part of the college experience, and also recognize potential allies in a generation of hands-on parents who can help when things go too far.

"I think it helps students open up to parents," said Steven Clarke, director of Virginia Tech's College Alcohol Abuse Prevention Center. "And parents can be helpful in setting boundaries students might need."

The beefed-up parental notification policy is part of a broader strategy that includes alcohol-education classes and a "party positive" program that encourages responsible drinking.

The student reaction to the policy change, not surprisingly, has been less than enthusiastic.

"If you have one beer in the dorm and you get caught, I don't feel like parents should be notified," said Erik Pryslak, a junior engineering major. "Now that we're all in college, we're all adults. It's kind of your responsibility to take care of yourself. If you want to make your parents aware you're about to be kicked out of school, then it's on you."

Studies show that students who say their parents would disapprove of them drinking are less likely to drink heavily once they get to college, said Toben Nelson, an assistant professor at the University of Minnesota School of Public Health who has studied campus drinking.

At Virginia Tech, the school has operated on a "three strikes" system for years: Students get one strike for a minor alcohol violation and two for a major one — things like getting a DUI or vomiting all over a residence hall bathroom. Three strikes and a student is suspended for at least one semester.

After a spate of alcohol-related deaths on college campuses, Congress in the late 1990s changed student privacy laws to lower barriers to parental notification in cases involving students under 21 . . .

Parents of Generation X students were often reluctant to get involved when the school invoked an emergency clause in privacy laws and alerted them of alcohol problems, he said.

"The response would be, 'You know, I'm leaving on a cruise. I'm going to a class reunion.'"

But today, parents of millennials tend to be tethered by cell phone to children who studies show often idolize their parents — so it makes sense to go a step further in parental involvement, he said.

"We'd like to strike a happy medium," Spencer said. "We're grateful for the positive involvement of parents. We find it difficult when their involvement is over-involvement."

Research has found more than 40 percent of college students reported at least one symptom of alcohol abuse or dependance. One recent study estimated that more than 500,000 full-time students at four-year colleges suffer injuries each year related to drinking, and about 1,700 die in such accidents.

"When it comes to safety, there really is a fine line," said Max DiSesa, a sophomore from Durham, N.H. "I completely understand Virginia Tech and they want to keep people safe. But I think this might be overall detrimental to the growth of students." . . .

The article says that some students are not pleased about these policies. If you're a college student reading this, would you be pleased? What about you high school students? Any parents out there care to comment?

Is it time to tame Animal House?