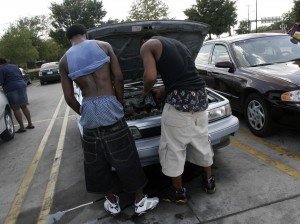 Have you been on any college campuses (or should that be "campi"?) lately? If so, what did you notice about the way that students dressed?

Apparently, the administration at Morehouse College, the only all-male, historically black institution of higher learning in the United States, has seen enough of low-slung, baggy pants and other unbecoming attire adorning its students.

The Atlanta-based college, which touts "a proud tradition of producing outstanding leaders," and whose mission "remains steadfast: to produce academically superior, morally conscious leaders for the conditions and issues of today, whether 'today' is post-Civil War or turn of the new millennium," has seen fit to invoke a dress code on its men.

Jeff Greer noted the details about this last fall in his USA Today education blog and he got some interesting comments:

You won't see sagging pants, headgear, or women's clothing anymore at Morehouse College. The all-men's college has instituted an "appropriate attire policy" for students, the Maroon Tiger reports. There are 11 guidelines for appropriate dress that will be distributed through campuswide E-mail and on the school's website, as well as in the student handbook.

Morehouse President Michael Franklin's conceptualization of the modern "Renaissance Man" is the basis of the new dress code, the report says. Franklin wants students to be "well-dressed" men of Morehouse.

The Maroon Tiger reports that the reaction to the new rule is mixed.

"I would say that about 95 percent of the students on this campus feel that appearance matters to them," William Bynum, vice president of the college's Office of Student Services, tells the Maroon Tiger. "We are not trying to isolate anyone that falls under a category, you can just look at it like it's one out of 11 things being addressed."

Others aren't so sure how to define a modern "Renaissance Man," especially when it comes to clothes. Several students interviewed expressed disappointment with the school's new policy.

"Outward appearance assists with how you carry yourself, but either way you cannot change someone's mindset," one student tells the Maroon Tiger.

Some of the comments are interesting:

I think that it is very nice and professional that they have a dress code that is new. At Morehouse college in the effect of the new dress code you will not see any sagging pants, head gear, or women's clothing. All of the students will look like they are really going for something in life. About 95 percent of the students said it would be a nice change for them. The way you dress says a lot about you. Imagine if everyone in Morehouse were walking around, pants sagging, chains, hats on, you would think they are all thugs. If there are gays there they will have to adjust ti the dress code. I think it is a positive thing for them. I know at times some students are not going to like them probably. The dress code code was probably meant to shape up the students at the college. Morehouse is a nice college, and has nice education from what i hear. The dress code will just add on to it.

The way you dress says a lot about the person you are, so responding to this article was important. If you come into a job interview with sagging pants you are automatically looked at in a bad way. Dressing in a formal attire tends to have people look at you in a good way. My views on this article is that i agree that the men of Morehouse should wear formal attire except for wearing sagging pants. It looks better when you present yourselve in a positive way and helps make the environment better. This issue affect me and society because it tells how appearance is now the thing looked at before a person is even meet, so therefore we all should keep ourselves well groomed and make a good impression. No one wants to see someones underpants so everyone should be respectful of others. A possible solution for this issue is for the men of Morehouse to take on the rule in dress for success.

i would like to address all those opposing of our, morehouse college, new policy because it is “discriminatory against gays and transgendered students" but the reality is these students who identify with these positions, addressing the students that solely identify as homosexual or “feminine" as stated above, these students are all male and identify as such, there is no discrimination against these students because they are gay so lets stop saying that because it does become a greater issue from that false perspective; your clothing does not determine nor define your orientation, if you are gay are you gay because you put on womens clothing? thats a false identity if that is the case, there is no perscriptive diagnosis provided to the college stating these students will not be able to produce or become a great leader, as morehouse is known to produce, on the basis they are uncomfortable in clothing for males.also knowing the history of the college and its mission is important, a lot of these brothers come to morehouse for ATLANTA and not the rich tradition and nurturing provided at morehouse so it becomes blurry when they become engulfed in the sub-cultures of the city and transcend them into the culture of the campus. transgender students alike are responsible for knowing the institution they have chosen, there is no animosity towards any or none of my brothers alike; i have love for everyone, and in that i feel it is more important to figure out honestly if morehouse is the best choice, being an all male historic institution, rich and set in its own culture and development and leadership building skills for men, if identifying as transgender prohibits any of those, especially when it deals with changing the school for case by case accommodations; we have to really think rationally before we go head into situations, i know morehouse, i am morehouse, sexual orientation is not a determinant of that, what i produce is the etermining factor of that . . .

And so it goes. What's your opinion on college dress codes?