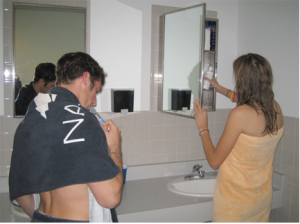 I wonder how many high school seniors and their parents know about co-ed dormitory bathrooms. Do you know about them?

In case you don't know the scoop, here's the deal:

Many college dorms are co-ed by floor. Some are co-ed by room, but we won't get into that here. On co-ed floors, the students, both men and women, use the same bathroom (see above picture), which means that while you're in the shower, someone (or a group) of the opposite sex (probably not a family member) may be nearby in the bathroom with you, doing whatever, at a sink, urinal, or toilet stall. Would that make you feel uncomfortable?

POULTNEY, Vt. — Green Mountain College student has filed a lawsuit over the lack of single-sex bathrooms in the her co-ed residence hall.

Nineteen-year-old Jennifer Weiler filed a civil complaint last week against the Department of Public Safety, which enforces building and plumbing codes she claims were violated.

All seven of the school's residence halls are co-ed. According to the lawsuit, Weiler and others are uncomfortable with the flimsy curtains on the shower doors and men using the toilets without closing the door.

Weiler's father, Ron Weiler, told The Burlington Free Press that school officials agreed to label the bathroom on her floor "female" but males continue to use it. A college spokesman declined to comment.

Personally, I think co-ed bathrooms are a bit too liberal in their approach to privacy, but then I'm just an old conservative SITM (stick-in-the-mud). I'm big on personal privacy and my days in single-sex college and military bathrooms were challenge enough for my picky standards.

Have you considered the implications of a co-ed bathroom, assuming that you end up in a dorm that has one? If not, and you're feeling somewhat ill at ease about it, here's a helpful article that could assist you in dealing with the situation:

How to Survive Dorm Bathrooms

When you first move into a college dorm, the biggest adjustment you might have to make is to using the dorm bathroom. Only the luckiest of dorm dwellers, at very few colleges, have private or semi-private bathrooms. Most people living in a dorm have to share a bathroom with dozens of other students.

Step 2. Get over the shock if you find out your bathroom is coed. At first it feels very uncomfortable, shortly it starts to feel normal. Coed bathrooms do not usually have urinals and if they do they are inside the stalls. In time you get to know all of the other people who share the bathroom and see the opposite sex like sometimes annoying siblings.

Step 4. Wear shower shoes, flip flops or sandals when going into the bathroom if you are barefoot. Keep your flip flops on when taking a shower to avoid getting athletes foot, staph and other infections that can be transmitted from shower floors.

Step 5. Use common sense. Assess the cleanliness of the bathroom before using it. If someone throws up in a bathroom stall on a Friday night, and the cleaning person isn't coming until Monday, consider putting on rubber gloves and cleaning it yourself. If you don't want to clean it, notify the Resident Director or whoever is in charge of the building to see if they can call in a cleaning person.

Now, Mom and Dad, if that didn't get your attention, perhaps you should be boning up on the next-higher level of pending college-knowlege incredulity:

A Co-Ed Dorm Room? That Wasn't Mentioned on the College Tour

The National Review posted an articleon its Web site on Monday that is bound to send shivers up the spines of the parents of some high school seniors — to say nothing of parents of students already in college.

Under the headline, “Caveat Parens: One Family's Adventures in Gender-Neutral Housing," the author, Karin Venable Morin, writes of her daughter's most recent dorm room assignment at Stanford: “with one other girl and two boys." . . .

You can read the rest for yourself. Plus, if you want to read 295 additional comments from parents about co-ed rooms, check out this lively College Confidential discussion forum thread.

Are we having fun yet?