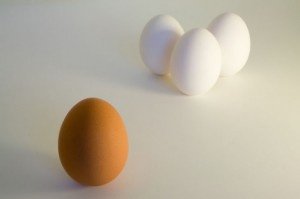 The issue of racism is a popular one in America today. It seems that every day or so we hear new charges about this or that high-profile individual being motivated to accomplish his or her personal goals through means that include being racist. It's not a pleasant situation.

One news item and one opinion piece speak clearly about racism on campus. First, for the news item, we go to Hampton University in Virginia:

The "Homecoming Queen" at a traditionally black US university has sent a letter to President Barack Obama, complaining that her win had been questioned on campus because she is white.But after her letter riled students at Hampton University in Virginia, beauty pageant winner Nikole Churchill issued a public apology, saying she had taken "the comments of a few and blew them out of all proportion."

Churchill, a tall, raven-haired woman who, like Obama, grew up in Hawaii, wrote to the president after winning her university's beauty pageant last week.

"It would be much easier to say that possibly some were not accepting of the news because I wasn?t the most qualified contestant; however, the true reason for the disapproval was because of the color of my skin. I am not African American," the nursing student wrote to the president.

She asked the president for help, suggesting that he visit Hampton University to convince students to "stop focusing so much on the color of my skin and doubting my abilities to represent, but rather be proud of the changes our nation is making towards accepting diversity.

"I am hoping that you can assist me in opening some closed minds," Churchill said.

That brought a raft of reactions, including from students at Hampton University who said race had nothing to do with their disgruntlement at Churchill's election.

"Black or white, this young lady is not qualified to be the face of Hampton University as she is not in tune with the wants, needs, and desires of the student body at large," a person who signed themselves as a graduate of the university commented on the website of Essence, a magazine for black women.

"Although some are outraged by her race, I think most are upset because this young lady has no ties to the student body. She is a transfer student who attends an HU satellite campus. She has never lived in a dorm, eaten in the cafe, or spent time in the Student Center."

Churchill has issued a statement on the university's website, regretting having written to Obama and apologizing for drawing negative attention to Hampton University, which she hailed as being a long-time pioneer of diversity.

The next instalment in the saga is likely to come on October 21, when Churchill is due to be formally "crowned" during Hampton University's week-long homecoming celebrations.

The issue here is not that there may have been actual racism at work, although apparently there were a few racist comments made, but rather that Ms. Churchill felt obligated to raise the issue to the national governmental and national press level. This, in turn, has created a backlash with amplified racial undertones. The Law of Unintended Consequences strikes again.

Now, for a complementary perspective on campus racial matters, consider these words from Walter Williams:

The racism of campus 'diversity'

Many of our nation's colleges and universities have become cesspools of indoctrination, intolerance, academic dishonesty and the new racism. In a March 1991 speech, Yale President Benno Schmidt warned, "The most serious problems of freedom of expression in our society today exist on our campuses. ... The assumption seems to be that the purpose of education is to induce correct opinion rather than to search for wisdom and to liberate the mind."

Writing in the fall 2006 issue of Academic Questions, Luann Wright, in her article titled "Pernicious Politicization in Academe," documents academic dishonesty and indoctrination all too common today. Here are some of her findings:

* An ethnic studies professor at Cal State Northridge and Pasadena City College teaches that "the role of students and teachers in ethnic studies is to comfort the afflicted and afflict the comfortable."

* UC Santa Barbara's School of Education e-mailed its faculty asking them to consider classroom options concerning the Iraq war, suggesting they excuse students from class to attend anti-war events and give them extra credit to write about it.

Other instances of academic dishonesty include professors having their students write letters to state representatives protesting budget cuts. Students enrolled in cell biology, math and art classes must sit through lectures listening to professorial rants about unrelated topics such as globalism, U.S. exploitation of the Middle East and President Bush.

Wright is also the founder of NoIndoctrination.org, a website containing hundreds of reports of similar academic bias and dishonesty.

Anne D. Neal, president of the American Council of Trustees and Alumni, wrote a companion article titled "Advocacy in the College Classroom." She says that campuses across the nation have cultivated an atmosphere that permits the disinviting of politically incorrect speakers; politicized instruction; reprisals against or intimidation of students who speak their mind; political discrimination in college hiring and retention; and campus speech codes.

On most college campuses, there's the worship of diversity. The universities of Harvard, Texas A&M, UC Berkeley, Virginia and many others boast of officers, deans and vice presidents of diversity. Many academics make the mindless argument, with absolutely no evidence to back it up, that racial representation is necessary for academic excellence. For them, getting the right racial mix requires racial discrimination.

Diversity wasn't the buzzword back in the 1970s, '80s and '90s. Diversity is the response by universities, as well as corporations, to various court decisions holding racial quotas, goals and timetables unconstitutional. Offices of diversity and inclusion are simply substitutes for yesterday's offices of equity or affirmative action. It's simply a matter of old wine in new bottles, but it's racism just the same.

In an open letter titled "To the President of My University," Carl Cohen, professor of philosophy at the University of Michigan, summarizes, "Diversity is a good thing – but the claim that the need for diversity is so compelling that it overrides the constitutional guarantee of civic equality is one we swallow only because, by holding our nose and gulping it down, we can go on doing what our feeling of guilt demands."

Until parents, donors and taxpayers shed their unwillingness to investigate what's sold to them as higher education, what we see today will continue and get worse. Just as important is the recognition of the fact that boards of trustees at our colleges and universities bear the ultimate responsibility, and it is they who've been grossly derelict in their duty.

So, what's the bottom line here? In my view, the bottom line is that regardless of how "progressive" we want our tolerance and acceptance of certain issues to be, the pure gravity of human nature is going to pull good intentions into the quagmire of hypocrisy. I also think that it's a great time to take a hard look in the mirror.

Where do you stand on such issues as Affirmative Action in college admissions? I'd really like to know. Post your comments below.