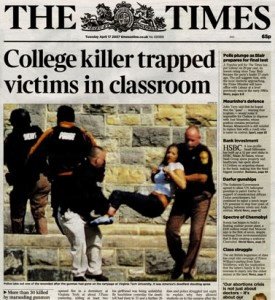 I'm a former college Dad and my wife and I, as college parents, often thought about the security of our son and daughter as they went through their college years. Thankfully, they had absolutely no problems, but that was as far back as 20 years ago (can it be that long ago?).

The situation is a bit different today, though. A new multi-agency Federal report shows that the number of violent incidents on college campuses has almost doubled since when my children were in college. This is reason for concern and consideration during the college selection process.

Here is some background from the Associated Press' Pete Yost on both the Federal report and associated details:

Targeted college campus violence, from serious assaults to the mass shootings at Virginia Tech in 2007, is up sharply over the last two decades.

The cause of the increase is unknown, though the report noted a dramatic rise in college student enrollment in the past 20 years.

Violence on or near college campuses is hardly new. The report cited, for example, a murder-suicide in 1909. In that incident 101 years ago, a man shot and killed a student on her college campus and then killed himself, reportedly after the student rejected his marriage proposals.

"For years, colleges and universities have worked to address this challenge _ to create safe campuses where academic and personal growth can flourish," says the study, "Campus Attacks." "In the wake of the Virginia Tech tragedy, many universities were confronted with the troubling reality that one person can, in a few brief moments, devastate a college community through an act of targeted violence."

The report was released on the third anniversary of the shooting rampage by Virginia Tech student Seung-Hui Cho, who killed 32 students and faculty members and took his own life. The report comes as a result of recommendations from a federal panel that studied that tragedy.

In the 272 incidents of targeted violence studied for the report, 281 people were killed 247 injured. Of those deaths, at least 190 were students and at least 72 were employees.

Targeted violence is defined as cases where attackers select a victim beforehand or randomly choose victims because they fit some predetermined profile or relationship. It excludes violence that breaks out spontaneously, such as during an argument.

The study found that:

_Factors relating to an intimate relationship were a motivating or triggering factor in a third of attacks and academic stress or failure was a factor in one out of 10 attacks.

_Sixty percent of those who engaged in targeted campus violence were current or former students at the school where the violence took place.

_Firearms were used in more than half the incidents and knives or weapons with a blade were used in over 20 percent.

_Over 90 percent of those who committed such attacks were male.

In nearly three-quarters of the incidents studied, the attacker appeared to have targeted one or more specifically named individuals. But sometimes it appeared that random people were targeted along with specific victims.

Understanding what motivates an attacker to go solely after random victims "remains a complex and difficult challenge," the report said.

The report included 52 acts of violence in areas surrounding college campuses, saying that to exclude nearby locations would neglect the role of campus safety departments and campus threat assessment teams in securing the general area.

The report is a preliminary step in gaining a better understanding of targeted campus violence.

The next phase of the work _ a collaboration between the FBI and the Education Department _ will examine case files and investigative records from campus attacks, with a focus on factors such as past behavior and mental illness by those who carry out such crimes.

The research is expected to help threat assessment teams made up of professionals from a wide range of campus departments. The teams created in the aftermath of the Virginia Tech killings identify individuals whose behavior causes concern or is disruptive and assess whether the person has the intent or ability to carry out an attack.

Along those lines, would you like to know the 15 Worst College Crime Areas? Here they are:

NeighborhoodScout.com and WalletPop.com recently released a report on the most dangerous neighborhoods for property crime in the U.S. Surprisingly, this exclusive list included numerous neighborhoods which are adjacent to some of America's largest and most prestigious colleges and universities.

Seeking to explain this phenomenon, many local police departments responded to the story by citing a young, transient population who are often on their own for the first time, living in close quarters, and not securing their belongings, as potential reasons college neighborhoods may be some of the highest risk areas for burglary, theft and motor vehicle theft.

Top 15 College Neighborhoods for Property Crime in the U.S.

(Note: Colleges can be included in the list more than once, since more than one neighborhood near a particular college can make the list. Each neighborhood, shown in parenthesis, will be listed separately in the order of its property crime rate.)

No. 8: Univ. of Pennsylvania

No. 13: Univ. of Southern California

Obviously, the Internet can be a huge aid in finding out what the true story is behind campus safety. Don't always accept at face value the glowing reports of college marketing people about how safe a campus is. Decide for yourself.