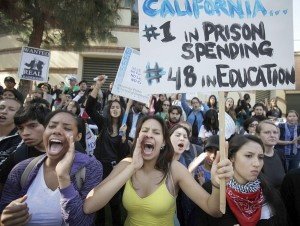 Here's some exciting news from The Governator's state, California:

". . . a University of California regents panel on Wednesday approved a 32 percent fee increase for undergraduate and graduate students, including a midyear increase that will hit students' pocketbooks in January."

Here's the scoop from the LA Times:

Regents are expected to approve yet another increase, arguing it's needed to avoid further course reductions and staff furloughs. The plan draws statewide protests. Police arrest 14 at UCLA.

Caught between state funding cuts and rowdy student protests, a key committee of the University of California's Board of Regents on Wednesday reluctantly approved a two-step student fee increase that would raise undergraduate education costs more than $2,500, or 32%, by next fall.

If the action is endorsed as expected by the full board today, the annual cost of a UC education, not including campus-based fees, would rise to $10,302 -- about triple the UC costs of a decade ago. Room, board and books often add an additional $16,000.

The regents faced a large and noisy rally at the UCLA hall where they met, and demonstrations were held at several other UC campuses across the state. But regents, some saying it was the toughest decision of their tenure, contended they could not avoid the fee hikes without damaging the academic quality of the 10-campus, 229,100-student university.

"I hate to say it, but if you have no choice, you have no choice," UC President Mark G. Yudof told reporters after the committee vote. He empathized with student anger, but said it would be better directed toward state lawmakers who have cut education funding.

The regents acted despite appeals from students such as Victor Sanchez, president of the UC Student Assn., who urged the board at least to postpone a vote until the outlines of next year's state budget are clear.

"These proposals are egregious to say the very least," said Sanchez, a UC Santa Cruz senior. "The dreams of so many are being shattered as we speak. When will enough be enough?"

The meeting was interrupted three times with anti-fee-hike chants and choruses of "We Shall Overcome," leading to 14 arrests. Outside, some in a crowd of about 500 students and labor-union activists threw sticks and other objects and pushed against a large contingent of campus police in riot gear. Several students and police suffered minor injuries, police said.

"Fees are going to be so high that people are not going to be able to attend this institution," said Kenia Acevedo, a UCLA law student who attended the meeting. "It is a devastation to what is supposed to be a public institution."

The UC fee hikes and similar increases by the California State University system earlier this year are part of a national trend. As the recession has brought sharp declines in tax revenues, states have shifted more of the cost of public colleges and universities to students.

The regents' finance committee approved the new fees for UC's undergraduates 10 to 1, with only student Regent Jesse Bernal voting no. The full board is expected to endorse the change today, along with even higher increases for students in professional schools such as law and medicine.

In addition to a jump in basic fees for graduate students, those in professional schools will see an increase in the surcharges for their degrees ranging from $280 to nearly $5,700 more a year depending on their major and campus. For 2010-2011, fees for graduate students at UC Berkeley's business school would be $41,654, not including living expenses; for UCLA's law school, $40,522; for UC San Francisco's medical school, $31,095.

If regents approve the increases, undergraduates would first see a $585 rise in UC fees for the rest of the current academic year. With another increase starting next fall, the total cost would be $2,514 higher than it was this fall.

Given large cuts in state financing and grim predictions for next year, the regents said they had to hike fees to avoid further reductions in course offerings, faculty hiring and student services. They also said they do not want to extend into a second year a furlough program that reduces most UC employees' pay by 4% to 10%.

UC administrators emphasized that a third of the income from the undergraduate fee hikes and half of the extra graduate fees would go toward financial aid, and that more than half of undergraduates would be fully cushioned from the increases. The regents panel also approved a policy that would cover all the basic education fees with UC, state and federal aid for families with annual incomes under $70,000, up from $60,000 this year.

The promises about financial aid did not calm students' anger at the regents, however. At one point, the crowd outside the meeting hall at UCLA's Covel Commons surged against the doors and a few people threw sticks, plastic bottles and rags dipped in vinegar at police, according to UCLA police spokeswoman Nancy Greenstein. She said campus police used taser guns twice in light stun mode. No arrests were made outside the building. Of the 14 arrested inside, 12 were students, Greenstein said.

UC often compares its finances to four other public universities: the State University of New York at Buffalo and top universities in Illinois, Michigan and Virginia. With the new fee hikes, UC's costs for undergraduates for the first time would be higher, by about $300, than the average of those four institutions, according to a UC report.

In January, the regents reduced freshman fall enrollment for the current year by 2,300 students, or about 6%, because of what they described as insufficient state funding. On Wednesday, they approved a request to the state that would increase funding by $913 million and warned that they might cut the freshman class next fall by another 2,300 if enough money is not available.

Meanwhile, outside a Long Beach meeting of the Cal State Board of Trustees, about 100 students, faculty and staff members from campuses as far away as San Francisco marched, chanted and carried picket signs to protest fee hikes and enrollment cuts.

Trustees of the 23-campus Cal State system approved what they called a "Recovery and Reinvest" budget that seeks $884 million in restored and new funding from the state. Chancellor Charles B. Reed exhorted the governor and legislators to "keep their promise" to support the system, which is struggling with severe funding shortfalls.

The protesters did not disrupt the meeting, but said they were very angry about how the university is being managed and about undergraduate fee increases of 30% approved earlier this year.

Megan Hinojosa, 20, a psychology student at Cal State L.A., said that many of the classes she needs have been cut or are oversubscribed and she fears it will take her far longer than planned to graduate.

"It's just harder to be a student in this system," she said.

and the sky is gray

I've been to the bursar

I won't graduate, no way

on such a dead-broke day.