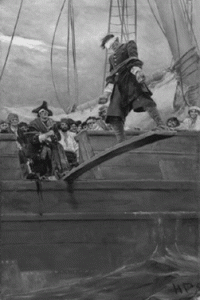 So you think you're ready for college, eh? I remember how I fancied myself a good writer when I was in high school. Then, in my college freshman English class, I got the first D of my life on a paper I wrote about Billy Budd. I wanted to jump overboard just before walking the plank.

I quickly made the necessary adjustments to my compositional style, though, and went on to become a famous Internet blogger [insert loud laughter here]. Seriously, now's the time, high schoolers, to take a good, hard look in the Mirror of Truth to see just how well prepared you are for college. Here's what can happen if you gloss over those gaping shortcomings before that crucial first semester on campus:

More city kids are graduating from high school, but that doesn't mean they can do college math.

During their first math class at one of CUNY's four-year colleges, 90% of 200 students tested couldn't solve a simple algebra problem, the report by the CUNY Council of Math Chairs found. Only a third could convert a fraction into a decimal.

The lack of math skills means the CUNY students - nearly 70% of which come from city schools - could struggle to keep up with peers, fail classes or even drop out, the professors charged.

The council submitted its report in September 2008 to Schools Chancellor Joel Klein with a plea to work with city schools.

"We didn't hear anything until this past June," said Lehman College professor and math chairman Robert Feinerman, noting there was a discussion about working together at the time. "But that whole thing seems to have petered out."

CUNY Chancellor Matthew Goldstein countered that he and Klein joined forces several years ago to "tackle the problem head on.... At the senior colleges, we've seen massive improvement," he said.

City Education Department spokesman David Cantor said the agency had been working to improve standards even before the professors' report.

"We had already moved to action," he said.

Still, several Hunter College freshmen approached yesterday had trouble figuring out some of the problems.

"I just did this earlier. Now I forgot it again," Jennifer Fortune, 18, who graduated from Brooklyn's Edward R. Murrow High School, said when asked to answer one of the questions. "I was only required to take two years of math in high school, but I forgot a lot of it."

"I don't want to ruin my GPA," he said. "High school standards were really low."

Okay. Let's take up the challenge:

Is that simple enough? If not, let me know and I'll back 'er down a notch.

Think the problem of students being unprepared for college is limited to New York? Check this from Michigan:

Most of Calhoun County's 2010 high school graduates are not prepared for college -- and they're lagging behind their peers in other parts of the state, according to a college readiness test all students must take before they graduate from high school.

About 10 percent of students in Calhoun County are college-ready, compared with about 16 percent statewide, based on results from the ACT. High school juniors take the ACT as part of the Michigan Merit Examination.

The science and math portions of the test were especially challenging for students in Calhoun County. About 16 percent of Calhoun County students are ready for college-level science courses and about 19 percent are ready in math.

Those troubles in math hit home for Sherry Ulrey of Battle Creek. Ulrey said felt her youngest daughter, a freshman at Michigan State University, should have been better prepared for college math classes.

Last year, Ulrey had her daughter, a 2009 Battle Creek Central High School graduate, take a night math class at KCC. Ulrey said she heard about students who graduated in 2008 and did well in calculus at Battle Creek Central but were placed into remedial math in college. She was worried the same thing would happen to her daughter, who took math up to the precalculus level in high school.

And so on and so forth it goes.

What does your Mirror of Truth show you about your college prep skills? The sharks are circling.