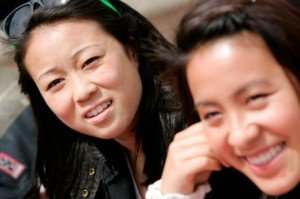 Are you an Asian applying to college this fall? If so, you may already be aware of the perceived (some say "real") prejudice against Asian applicants, especially at the so-called "elite" colleges and universities.

Asian applicants may face discrimination in the admission process at many elite universities, according to data from a recent study conducted by sociology professor Thomas Espenshade GS '72.

According to the data, not all races are considered equal in the college admissions game. Of students applying to private colleges in 1997, African-American applicants with SAT scores of 1150 had the same chances of being accepted as white applicants with 1460s and Asian applicants with perfect 1600s.

The results of the study come three years after Jian Li, a rejected Princeton applicant, filed a complaint with the U.S. Department of Education's Office for Civil Rights. He alleged in the complaint that he had been discriminated against based on his race when he was denied admission to the University.

Espenshade noted that he did not initially use the word “discrimination" when discussing the results of his study. Though he found a 140-point SAT score discrepancy between accepted white and Asian students, he did not have access to what he called “soft variables," like extracurriculars and teacher recommendations.

“The data we had is only part of the data that admission deans have access to," Espenshade said. “If we had access to the full range of info, it could put Asian candidates in a different light. This so-called 'Asian disadvantage' does not necessarily mean that Asian applicants are being discriminated against."

Also, since the study used data from 1997, “it would be desirable to replicate the study on more recent data," Espenshade said. “It's kind of hard to know how and to what extent things might have changed in the meantime."

When asked about University admission policies in light of Li's complaint, University spokeswoman Cass Cliatt '96 told The Daily Princetonian in September 2008 that “Princeton does not discriminate on the basis of race, color or national origin, and our admission policy is in full compliance with Title VI of the [Civil Rights Act of 1964]."

Because his study did not include research done about Princeton's admission policies, Espenshade said that he had “no empirical basis for having an opinion" about whether or not any possible discrimination occurred at the University.

Espenshade also noted that Li's complaint does not mark the first time these concerns have been raised.

A look into Harvard's admission policies in the 1990s showed that, after preferences for legacy students and athletes was removed, there was no discrimination against Asians based on race.

Still, Espenshade said he was surprised that Li decided to file a complaint against only Princeton, as Li was also rejected by Harvard, MIT, Stanford and Penn.

Yet Li's sentiments are in line with Espenshade's perceptions of the feelings of the Asian members of the University community. Espenshade explained that his informal conversations with Asian have led him to note the general feeling that they are held to a higher standard in college admissions.

“When Jian Li filed his complaint, it reinforced in their minds that they have to be twice as good as everyone else," he said.

Espenshade also found in his study that low-income minorities, but not necessarily low-income white students, had an edge in admissions.

Also, according to the results, which will be published in a book to be released in December, the very richest applicants generally had lower acceptance rates than similarly qualified but less wealthy students.

Though Espenshade said he doesn't know what could account for discrimination in admission policies, he noted that a lot depends on what universities are looking for in the perfect candidate.

“What I have concluded is that every university has in its mind an ideal shape of its entering freshman class," he said. “If the shape of the applicant pool differs, then there is sculpting that has to be done."

Now, for some from-the-trenches opinions of both students and informed parents, check the post on the College Confidential discussion forum. Here are a few representative comments from this much visited thread:

- Interesting article by Kim Clark of US News with loads of statistical data on how various ethnic and socioeconomic groups fare in the admissions process at elite private colleges: Do Elite Private Colleges Discriminate Against Asian Students? - US News and World Report

The data is from a recent study of 1997 applicants to seven elite colleges. (Not sure why the recent study used 1997 data.) From the article:

The whole study can be viewed here: http://www.nacacnet.org/EventsTraini...ments/C313.pdf

Of course, the tone of the article implies that SAT scores and GPA are and should be the prime determinant of whom is admitted. Arguably, one could make the case that once some minimum standard was met to insure that the student could do the work, additional academic accomplishment past that point should be merely one of a variety of factors like leadership, community service, athletic or musical ability, and so on.

- Elite colleges often have Asian (as well as Jewish) populations significantly out of proportion to their numbers in the general population. So one might also make the argument -- a wek one admittedly -- that based on overrepresentation they are favored in admissions. No doubt MIT could fill their ranks 100% with Asian-American students with a 3.9+ GPA and 1550+ on the SATs but I'm not sure that would be perceived in many quarters as desirable, particularly in the Asian-American community.

- A Chinese friend of mines now goes to UGA.

He was a member of the soccer team at our high school, he played tennis as well, he was great at both sports. Also, this kid volunteered at elementary schools in the poor areas of the town and he took his time to teach kids about math. The teachers at that school loved him as a mentor to the kids.

He did not get into Harvard but yet someone with an 1150 can. I fail to see how life if rough in the streets of a big city. I honestly have been to the Bronx and I mean the poor areas, the life there is average and definitely not as bad as life in a third world slum (especially in Asia).

Life is an unfair game, no matter how far America has come, race is still an issue.

They are not; in fact, they are higher, and this is where affirmative action arguments often crumble.

http://www.econ.duke.edu/~hf14/Worki..._april2009.pdf - This is another study, a corollary to the concept of affirmative action called mismatch. While I am not in complete accordance with the concept, the study reveals damning statistics showing that, according to the adcoms themselves, Asians are at the top in the qualitative categories as well as the quantitative categories (barring "personal qualities," where they are insignificantly lower than whites). The findings of the study can be condensed into the data table found here: News: Testing for 'Mismatch' - Inside Higher Ed

It's abundantly clear that Asians are discriminated against in the admissions process at top US colleges.

You could make the argument that colleges are biased for students with top grades, top test scores, etc. There are very clear reasons why Asians are getting in at many times the normal rate; without racial affirmative action, I think you could expect the Asian percentage at top schools drift closer to 45% (UC-B's current Asian population percentage) than the 15% as cited from the Princeton official in the USNews article.

So, you can see that there is quite a bit of passion out there about this topic. If you're an Asian applicant this year, or a current Asian undergraduate who has been through the process, please let us know how you feel about this topic. Post a comment.