Are Digital Textbooks the Future? 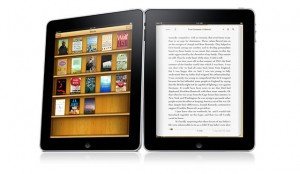 Those of us old enough to remember Dick Tracy were dazzled by his wrist radio. Now it looks like that same demographic might be dazzled by paper textbooks being replaced by digital ones, specifically on the iPad. Many school districts and colleges have already embraced Kindle-type technology. However, the bigger tidal wave of change is forming farther out to sea.

In a thought-provoking article in Campus Technology, headlined Is the iPad Ready To Replace the Printed Textbook?, we see this rather dramatic statement: "After trying out the Apple iPad for a short period--about three weeks--three out of four college freshmen said they'd be willing to purchase an Apple iPad personally if at least half of the textbooks they used during their college career were available digitally, according to the results of a classroom poll at Abilene Christian University."

Here are some other points raised by author Dian Schaffhauser:

... A majority of students who had the chance to work on the devices within their classes reported that reading on the iPad was "more convenient" than reading from traditional paper textbooks. But they also rated paper texts as "easier" when asked to compare the two ...

... Among recent findings: Students in a microeconomics course used iPads for two full semesters with a digital-only version of their course text. Some expressed frustration at losing personal annotations and highlighting when they updated the reading application. However, both students and faculty indicated they believed usage of the device increased class participation, involvement, and interest, as well as increased contact between students and professors. Students also enjoyed being able to collaborate on research activities at any time, from any location. They said the iPad and its application in the classroom modeled the use of mobile devices in the professional world, helping prepare them for their careers ...

... the digital books need to be "truly media rich." In one of the institution's pilots, the publisher actually limited the platform developer by stipulating that the book had to have exactly the same text content and be priced the same as the print book. That stance softened a little bit later on, he [Perkins] said, but "it's another major issue. The digital textbooks have to be something more than just the words available on a tablet device. Why can't you have video, audio, media-rich textbooks?" ...

One aspect not considered is the fact that students may not be able to retain their electronic textbooks indefinitely. As I write this, I'm looking at a bookcase here in my office that contains a number of my college textbooks that I used in the late '60s and early '70s. You might think that they're useless because of being outdated, but many are history-related texts, which tend not to become obsolete.

Furthermore, I can recall selling my unwanted college texts for a few urgently needed bucks back in the day. Can students do that with their iPad versions? Maybe. Time will tell.

What do you think about electronic texts? One thing to keep in mind is that we might see future generations with far fewer backpack-related back injuries. :-)