Here we go again. It's head-explosion time. Just when you thought higher education couldn't get any more costly, here comes Forbes' latest report on how to spend more on a year of college than you may make in one year. (Cautionary note: Many families don't pay full "sticker price" for college, but some still do.) In my opinion, this whole cost issue raises the specter of "prestige" once again. Lots of folks equate price with quality. You know, the old "If it costs more, it's gotta be better" school of thought. Of course, this should lead one to explore the annual "best buys in higher education" types of surveys, some of which we have discussed here. However, the focus of my post today is the schools that cost the most.

If you follow Admit This!, you'll have seen my comments on how the rise in college costs has far exceeded America's inflation rate across the decades. Similar to complaining about rising medical costs, there's really not a whole lot we can do about it, except exert our power as consumers. The problem with this approach is that the most expensive schools in this country have absolutely no problem filling their freshman classes year after year and many of them have waiting lists hundreds deep, just for good measure. There's always someone willing to pay. Market forces can be a two-edged sword and it looks like there's little hope of slashing higher education costs, at least in the near future. 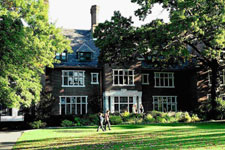 So, who are these top-of-the-cost-pile schools? Let's have a look at Forbes' list, starting with the top five:

Located just northeast of New York City, Sarah Lawrence College is America's most expensive school for higher education. Without a waiver, students are charged an additional $1,780 for accident/sickness insurance (not included in our cost estimate). About 65% of SLC students receive financial aid.

Columbia's tuition alone ($41,160) is already among the highest in the country, but incoming freshmen at the college also have to pay $2,655 in fees. Students also have to deal with the high cost of living in New York City. About half of all Columbia students receive grants to help pay for their education.

Bard, in New York's Hudson River Valley, provides financial aid to 65% of its students. One program allows eligible students to pay tuition at a rate comparable to a public university in their home states. An affiliated school in Massachusetts, Bard College at Simon's Rock, is also expensive: $53,982 per year.

According to its website, Wesleyan, located on the Connecticut River, "meets the full demonstrated [financial aid] need of those who enroll." Those needs could be large, considering its annual cost. This academic year, the school offered aid packages ranging from $3,500 to $54,600.

Including personal expenses and books, Vanderbilt estimates the cost of attendance for a first-year student to be $56,634. That doesn't include $1,500 for a laptop computer and $650 in lab fees, both required of engineering students. About 60% of undergrads at Vanderbilt receive financial aid.

Forbes makes some excellent points about these towering expenses and their effect on students and families. Here are a few excerpts from their report:

College graduates today face a dismal job market and often carry with them thousands of dollars in student loan debt. And yet, the price tag for a year's worth of study at America's most expensive colleges is close to $60,000. Overall, tuition costs at private colleges are up 4.5% since last year.

For the 2010-2011 school year, Sarah Lawrence College in Bronxville, N.Y., charges undergraduates $57,556 for tuition, fees, room and board, making it the most expensive school in the country. That doesn't include books, personal expenses or the $1,780 the school charges for accident and sickness insurance, which students must buy unless they have a waiver. It also doesn't include financial aid, which about 65% of all Sarah Lawrence students receive.

Karen Lawrence, the college's president, defends the hefty price tag. "Unlike any other college, Sarah Lawrence requires individual, biweekly student-faculty meetings, as part of every seminar (approximately 94% of our classes)," she says via e-mail. "As a result, our students spend almost twice the time in one-on-one discussion with faculty as students at other prestigious liberal arts schools."

Low student-faculty ratios are a benefit of small, liberal arts colleges. And more than a few appear on our list of most expensive institutions of higher education. Among them: Bard College ($54,275), located in New York's Hudson Valley; Trinity College ($53,380) in Hartford, Conn.; and Maine's Bates College ($53,300) . . .

. . . Despite the high cost of attendance at many private schools, the recession and slow economic recovery don't seem to have affected enrollment. According to Tony Pals, a spokesman for the National Association of Independent Colleges and Universities, "several private institutions nationwide are reporting record enrollments this fall, as was the case last year."

That's due to a few factors, he says, including a high rate of graduating high school seniors and efforts by private universities to keep costs low. Institutional grant aid increased 6.8% this year, compared with 9% last year. Still, the NAICU reports that the average cost of tuition and fees at private colleges has risen 4.5% since last year. While that's the second-lowest increase in 37 years (the lowest was a 4.3% increase between the 2008-2009 and 2009-2010 school years), it's still tough to swallow amid price deflation in almost every other sector of the economy.

Worth noting: In August Forbes completed its third annual survey of America's Best Colleges, which rates schools based on quality of education, student experience and professional success. Of those that made the top 25, only four also appear on our list of most expensive schools: Columbia, Wesleyan, University of Chicago and Harvey Mudd.

For articles like this, one of my favorite things is reading the comments. Obviously, this particular article has struck a nerve because, so far, there are almost 700 (!) comments. If you want to sample the mood of America, make a quick pass through some of them. It's not pretty.