The College Board has just issued its summary report on the results of last spring's Advanced Placement test for the high school Class of 2012. This is interesting information. It shows how many students took AP exams, a breakdown of scores, key demographic data, state-specific performance information, plus other insights.

Unless you just beamed down from another planet, you probably know what AP courses are and what they are designed to do. Just in case you are new to our planet, here's a brief explanation from the College Board site:

Through AP's college-level courses and exams, you can earn college credit and advanced placement, stand out in the admission process, and learn from some of the most skilled, dedicated, and inspiring teachers in the world ... From the moment you enter an AP classroom, you'll notice the difference—in the teacher's approach to the subject, in the attitude of your classmates, in the way you start to think. In AP classrooms, the focus is not on memorizing facts and figures. Instead you'll engage in intense discussions, solve problems collaboratively, and learn to write clearly and persuasively.

With 34 AP courses to choose from, including Chinese Language and Culture, Environmental Science, and Psychology, you'll be able to explore your interests and discover new passions. In AP classes, you'll study fascinating topics and ideas that just might become the foundation of your future college major or career ... Most four-year colleges in the United States and colleges in more than 60 other countries give students credit, advanced placement or both on the basis of AP Exam scores. By entering college with AP credits, you'll have the time to move into upper level courses, pursue a double-major or study abroad.

If you're a high schooler, you may be planning to take some AP exams this spring. Usually, juniors and seniors take them, but some advanced students begin taking them in their sophomore year. If specific AP courses are available to them, even some freshman can get into the act. It's quite challenging, but as the explanation above attests, it can also be quite rewarding from both a financial and admissions credential aspect. 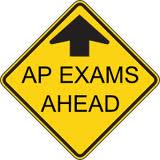 Now that you're up to speed on APs, let's take a look at that report. Here are some highlights:

While Participation and Performance Increased Compared to the Class of 2011, Many High School Students with Potential for Success in College-Level AP® Courses Still Lack Access

Data released today by the College Board as part of The 9th Annual AP Report to the Nation revealed that more high school graduates are participating — and succeeding — in college-level AP courses and exams than ever before. Succeeding in AP is defined as achieving a score of 3 or higher on the five-point AP Exam scale, which is the score needed for credit, advanced placement or both at the majority of colleges and universities.

Among students with high potential for success in math, the ratios of students who actually took an AP math exam were:

While the challenge to improve equity and access applies to all AP courses, its importance is amplified among the STEM (science, technology, engineering and mathematics) disciplines. Research shows that students who took college-level AP math or science exams during high school were more likely than non-AP students to earn degrees in physical science, engineering and life science disciplines — the fields leading to some of the careers essential for the nation's future prosperity.

Although progress is being made, underserved minority students remain underrepresented in AP classrooms and among those succeeding on AP Exams (see Figure 5):

For even more insights, check The 9th Annual AP Report to the Nation, available at apreport.collegeboard.org.