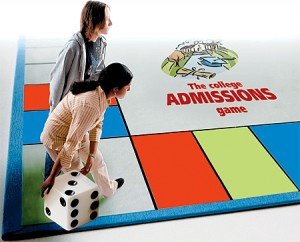 Here's a superb film about elite college admissions that parents should see. Why am I singling out parents? Well, that's because when you watch In 500 Words or Less, you'll get to see the sometimes less-than-positive effects of your good intentions while "helping" your high school senior with his or her college process.

Of course, high school students, especially you rising juniors and rising seniors should watch 500 Words too. If you're aspiring to the Ivy League and other so-called elite schools, then these stories that follow four seniors through their stresses and agonies can be quite helpful, if not cautionary.

Who are these four seniors whose stories we see unfold?

Molly is a middle-class field hockey star living in suburban New Jersey. She decided she wanted to go to Princeton when she was 7 years old and has been working for that dream ever since. But by her senior year of high school, she realizes her grades, activities and standardized test scores won't stand out compared to other Princeton applicants. She gets real. Her mother doesn't, and their relationship begins to fray.

Leo is a first generation Dominican American going to high school in Yonkers, New York. Raised by a single mother who never finished college, he feels the weight of her sacrifices rest on him. He has set his sights on the country's most selective schools because, in his mind, anything less will be failure. The prospect of getting accepted causes him even more anxiety as he worries if he'll always be an outsider.

Lindsay is a politically active idealist living outside Washington, D.C., who describes herself as 'deceptively cheerful.' Her constant smile and wry sense of humor hide the fact that she's agonizing about losing her mother to cancer. She hopes college will be her chance to escape some of her sadness, grow into womanhood, and live within minutes of all her friends. She's so anxious to get the whole application process over with that she decides to apply to one school only--her mother's alma mater. [Incidentally, Lindsay makes a pertinent reference to the College Confidential discussion forum, which helps her find out important information about certain admission decisions.]

Michael is the class clown at his elite Atlanta prep school. Despite being from a family of overachievers, he loves to live by the motto, “wherever you go, there you are." Whether he's starring in the school play, playing video games with his brother, or reading about the Enlightenment for fun, he's pretty content. And eventually he gets around to schoolwork. His laid-back approach tends to stress his parents, especially when it comes to his college applications. They're hoping he'll follow his older sister to Harvard, but they're not quite sure how to make him get his applications in on time.

And what is the mission of this film?

Going to college is a rite of passage for many American high school students, but the process can be overwhelming: college fairs, tours, SATs, applications. Then there's the personal essay. How does a seventeen year old define herself to total strangers when she's only beginning to discover who she really is? And how can she be expected to do it

Point Made Films takes you on the journey to college with four very different young people as they spend their last year at home trying to figure out who they are and who they want to be.

Parents and teens alike will recognize the aspirations, anxieties, disappointments and triumphs in these characters' lives. Whether you're about to begin the process or have just come through it, you'll ride along side Molly on her emotional roller coaster as she tries to balance her parents' expectations with her own goals. You'll respect Leo as he works to fulfill his mother's American dream while trying to maintain ties to his Dominican heritage. You'll root for Lindsay as she searches for her next home while the one she's known for 17 years gets turned upside down; and you'll cheer for Michael as he steps out from behind his sister's Ivy League shadow to discover his own priorities.

In 500 Words or Less is a portrait of four out of the nearly 1.5 million families who go through the college admissions process each year. While race, geography and socio-economic status affected how they got here, their stories converge as they all juggle acceptance, rejection, decision-making, letting go, and growing up.

So, with that background, I popped in the DVD. The first thing I searched for was Closed Captions, since I have an acute hearing loss (even hearing instruments don't reveal subtle sighs and mumblings) but found none. So, I promptly switched from my main DVD player to my laptop and plugged in my headphones, which saved the day for me.

One of my obsessive traits is that I watch movies and TV shows with an eye toward production techniques. I've worked on film projects over the years and I'm aware of just how much effort it takes to make things appear to be smooth and natural. This film accomplishes that admirably, and I had to admire Molly's naturalness as the camera "caught" her arising from sleep and washing her face on the morning of her first day of senior year. Either she was really groggy or she did an amazing job of ignoring closeups of her daybreak ablutions.

Some of my other thoughts about the main players:

Three of the four (Molly, Lindsay, and Michael) came from affluent homes. We see Molly driving her Volvo sports sedan, a car much nicer than my own, and her Gucci eyeglasses, which complement her high-end wardrobe. Michael and Lindsay also live in high-end suburban neighborhoods with similar perks. Not that's there's anything wrong with that.

Leo, a Dominican, comes from inner-city Yonkers and lives in a cramped apartment, sharing a tiny bunk-bedded room with his younger brother. This is where all Leo's computing occurs (sometimes with his brother's upper-bunked arm dangling not far behind Leo's head), and we see his ups and downs as he opens his admissions-decision email messages.

The film projects a wide range of emotions. I have to admit being a bit choked up when Lindsay's grandparents say goodbye to her on her first day at college. I got peeved at Molly when she acted like a little entitled princess while speaking to her mother on her cell phone (from behind the wheel of her spiffy Volvo). I laughed at an especially articulate and humorous Michael when he became a circus ringmaster (literally), and I empathized with Leo as he dutifully participated in marching-band practice, after having quit the football team in order to keep up with his academics.

As for the parents, I saw some of myself in them. The mothers (and grandmother) were the prominent forces, riding herd on their offspring, trying to keep all the flighty ducks in a row. The dads (Leo's was absent) appeared to be somewhat passive, but still understanding and strong when necessary. In my own experience, the opposite was true. I was the annoying checker-upper on our kids' college process, and my wife offered moral support in counterpoint to my sometimes field-general orders.

Some of the scenes seemed a bit staged, such as the school counselor meetings, but for the most part, I was surprised to see how "natural" the reality approach worked. This is the story of Ivy seekers, a demographic that's probably much larger than you imagine. In pondering what to say as a summary comment about 500 Words, I suppose it would have to be about the unusually high stress level of college admissions at this level.

With the possible exception of Michael (who may well have the ability to conceal his anxieties), I could see the pressure of the process written on the faces of the other three, Molly and Leo, most of all. Lindsay apparently internalized a lot, especially about her mother's situation. Overall, though, it was hard for me to measure how much effect the presence of the camera had on their freedom of expression. I wonder which, if any, of the quartet gave pause to consider how they might think of themselves 10 years from now, as they look back at their film presence when (or if) they view the film again.

Should you watch In 500 Words or Less (yes, I am aware that it should be "Fewer")? Absolutely! However, who you are and what your station in life is are two qualifiers. If you're a parent of a future college applicant, you can learn some parenting dos and don'ts. If you're that future applicant, then buckle your seat belt. It could be a bumpy ride.