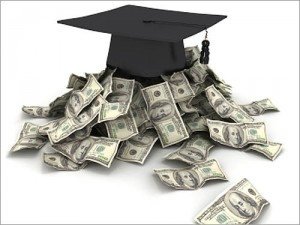 I've been through the student debt mill twice, both as a student and as a parent. It can be a real swamp of quicksand. In today's hard economic times, both high schoolers and parents might be asking themselves just how much debt is too much, in light of the possible return on that investment in today's (and perhaps tomorrow's) job market.

The term of my daughter's college loans payoff was 10 years, after she graduated. My son's was shorter than that. My own payoff term was more than 10 years due to some personal circumstances (career issues, basically) that kept me from making full payments. However, even during the tough times, I always made at least interest payments, if not some part of the principle, so that my credit score would not be torpedoed. That seems to be one aspect that young people overlook when times get tough: their credit rating, which can turn into a giant hurdle years down the road.

If you think you have some significant student debt, try this article on for size: What $200,000 in Student Debt Looks Like

Kelli Space is 23. She graduated from high school in 2005, and went to Northeastern University—"the first person in my family (including extended family!) to attend college," she says. Unfortunately, that may have deprived her of the opportunity to have someone tell her that the American college dream isn't all it's cracked up to be. Kelli emerged in May of 2009 with her diploma, and this:

That, friends, is [damn] frightening. (For an undergrad degree. The total was boosted by summer classes, books and miscellaneous expenses, and a year spent studying abroad.) Kelli writes us:

The severity of my situation goes a bit deeper than "I owe this money, help me" - I am actually forced to live with my parents (forced = I am lucky! But...) as the monthly payments for just my private loans are currently $891 until Nov 2011 when they increase to $1600 per month for the following 20 years... attached is my payment plan. I also mentioned I have a job - which is great! And I probably have my college education to thank for that! Except there is still no way to make these monthly payments, and live on my own as a contributing member of society. Neither of my parents, nor I, really knew how this would pan out — unfortunately — and now that I'm here, I see no real light at the end of the tunnel.

She's so desperate that she's set up a website soliciting donations from the public, TwoHundredThou.com, with the vague hope that it might go viral like that "Million Dollar Homepage" thing did. Her donations so far total ten cents. To Kelli's credit, she's not unaware of how that sounds; she accepts responsibility for her predicament, and acknowledges that there are surely more worthy charities out there than hers.

But she's desperate. She currently owes Sallie Mae alone nearly $190,000. At 23, that's a hell of a lot of debt to stare down. So even if you don't donate to Kelli's debt relief effort, take her cautionary tale as proof that knowledge is not, in fact, priceless. Sometimes it's much too expensive.

Fair warning? I hope so.